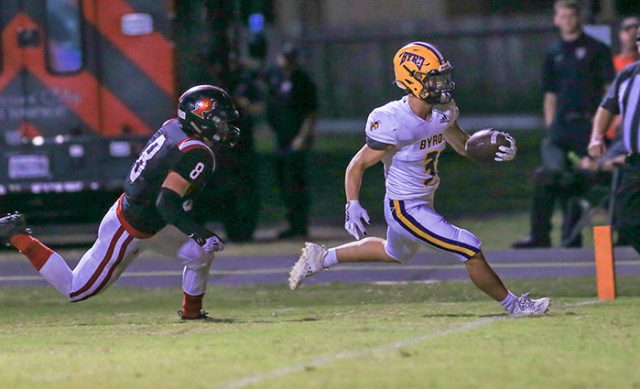 The Byrd Yellow Jackets and Parkway Panthers combined for almost 1,000 yards of total offense in their District 1-5A game Thursday night at Bobby Marlow Field at Preston Crownover Stadium.

In the end, the Yellow Jackets made a few more plays on defense than the Panthers and the result was a 35-24 victory.

Just before the half, Byrd held Parkway to a 24-yard Aeron Burrell field goal. That enabled the Jackets to take a 14-10 lead into the third quarter.

After taking a 28-17 lead with two 80-yard touchdown drives in the third quarter, the Jackets forced the Panthers to attempt a 45-yard field goal early in the fourth. It was no good.

Byrd then marched 80 yards for the third time and extended the lead to 35-17. The Panthers battled to the last play, but that drive basically sealed the deal for the Yellow Jackets.

The offensive stats both teams put up were impressive to say the least.

According to stats kept by Byrd’s 1130 AM radio crew, the Jackets and Panthers combined for 946 total yards.

Byrd’s veer option rolled up an incredible 512 yards rushing in 55 attempts. The Jackets’ Lake Lambert attempted three passes — all in the first half — and completed one for 21 yards.

Ramsey scored on an 87-yard run in the first half. That came after Parkway drove 86 yards in 16 plays with Ron Richmond scoring the game’s first touchdown on a 24-yard run.

Richmond and Jaylan White both had big games as Parkway rushed for 259 yards on 44 attempts. White had touchdown runs of 30 and 14 yards in the second half.