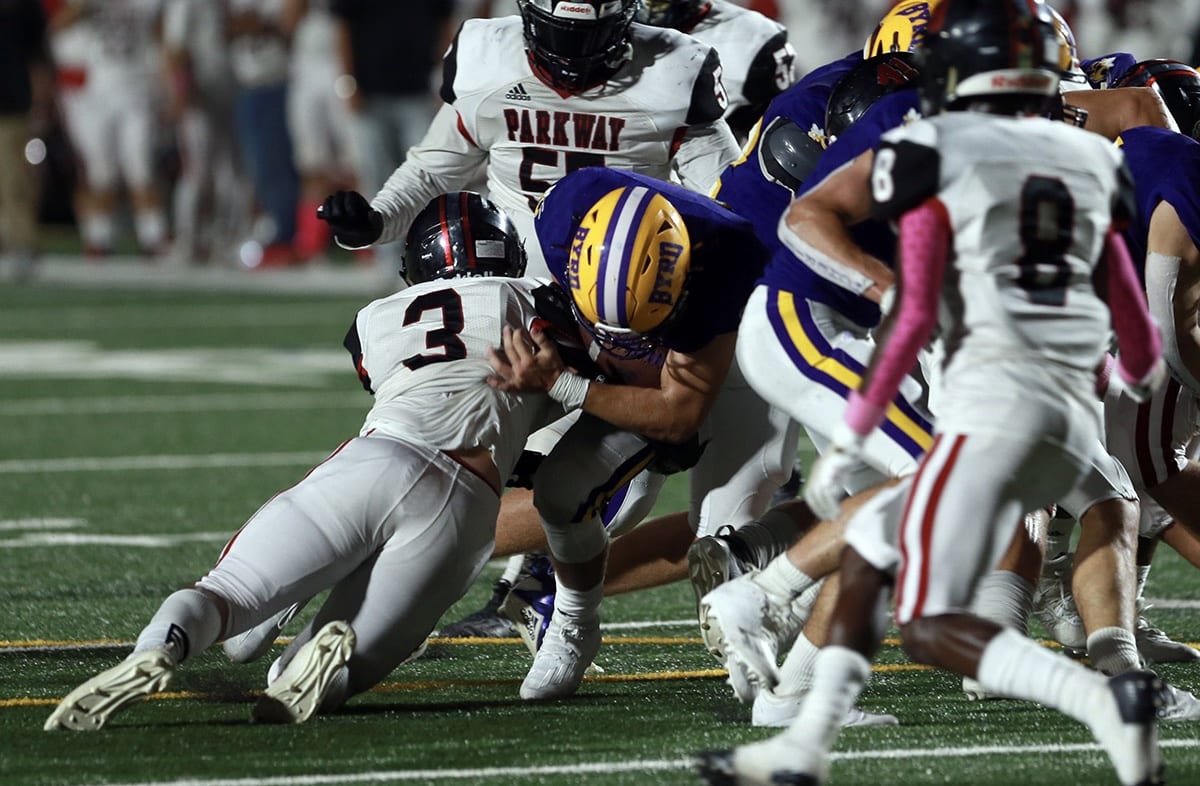 The Parkway Panthers ran into a buzzsaw in the form of the Byrd Yellow Jackets on Thursday night at Lee Hedges Stadium.

The Yellow Jackets scored on their first four possessions. The only first-half possession they didn’t score on was when they took over with 7 seconds left in the second quarter.

Byrd’s veer option offense rolled up 248 yards in the first half. Most of that was via the run, but the Jackets also did some damage through the air. Lake Lambert only completed four of seven passes in the game, but those helped keep drives alive and the Parkway defense on the field.

Meanwhile, Parkway ran just 10 plays in the first half for seven total yards.

Parkway isn’t the first team Byrd’s defense has shut down. The Jackets have allowed only two touchdowns in their last three games.

The Jackets’ first touchdown drive covered 67 yards on just five plays. Things went from bad to worse when the Panthers threw an interception on their first offensive play.

The Panthers got into a 14-0 hole last week in a loss to Captain Shreve but were able to keep the game competitive.

Not this time. Lambert broke loose for a 43-yard run to set up the Jackets’ third touchdown and Byrd led 21-0 at the end of the first quarter.

The backbreaker came in the second quarter when the Jackets went on a 17-play, 67-yard drive that took 9:47 off the clock. Parkway had several chances to make a stop but couldn’t do it.

The Panthers had some Individual defensive players make some good plays. But they couldn’t keep Byrd from converting third and fourth downs.

The Jackets added two more touchdowns in the second half to go up 42-0.

Rontavious Richmond scored the Panthers’ lone touchdown on a 10-yard run in the fourth quarter. That came after Richmond made a long run to set up the score. He went up the middle, backpedaled to just behind the line of scrimmage and took off around the right side.

Both teams’ backups got playing time down the stretch.

Byrd finished with 348 yards to 111 for Parkway, per stats from the Byrd radio crew. The Panthers had just 23 yards passing.

Byrd avenged a 14-13 loss to Parkway last year. The Jackets have already defeated three teams they lost to in 2019.

Parkway was scheduled to play rival Airline next Friday but that game has been canceled. The Panthers are now scheduled to play Woodlawn. The Knights (1-2) of District 1-4A defeated Evangel Christian 30-20 Thursday night for their first win of the season.