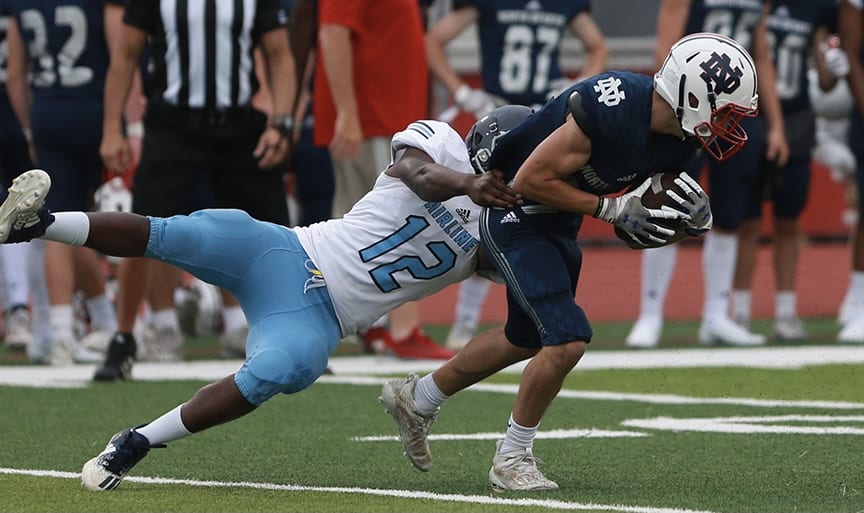 Last year, because of the COVID-19 pandemic, there was no spring football practice and numerous restrictions on summer workouts, including no 7-on-7 games.

This year, things basically got back to normal during the the spring and the summer is looking the same way with most restrictions lifted.

Rain did put a damper on parts of spring practice, but the head coaches of the six parish teams were generally pleased with how things went.

“That’s been one thing that’s great, to get back to normal workouts and just build a team,” Airline head coach Bo Meeks said. “The team-building aspect was pretty much cut out of it last year. So being able to get back to that has been great.”

Here is a wrapup of spring practice and a look ahead to to summer workouts. The return of the NWLA 7-on-7 Charity Invitational tournament hosted by Benton at Freedom Fields on June 18 and 19 is a highlight.

Each team’s record last season is in parentheses.

The Vikings got in eight days of practice concluding with a scrimmage against North DeSoto.

“I thought the spring went really well,” Meeks said. “We were able to get eight practice days and the scrimmage in with all the rain. So feel pretty good about that.

“But we’ve got a lot of new guys we’re replacing, particularly offensively. Thought we really grew during the offseason and practice, saw a lot of guys improve. Hopefully we’ve got some questions answered on both sides. But I thought it was really productive.”

Meeks said the scrimmage got off to a bit of a tough start but the Vikings improved as it went on.

“They got after us a little bit early and as the scrimmage went on we got better which I expected with the lack of experience,” he said. “I feel like we have good, young, talented guys, just don’t have much experience so it’s going to be about just growing up as fast as we can. I thought the spring was good for that.”

With the graduation of Alex Garcia, Airline will have a new starting quarterback for the first time since the 2019 season.

Meeks said sophomore Ladarius Epps and senior Gavin Ashworth are both working at he position.

The Vikings also will have new starters at running back. Senior Michael Johnson saw some action last season. Sophomore Tre’ Jackson also will be counted on at the position.

“It’s a hard-working group, kind of a blue-collar group,” Meeks said. “You can always count on them being ready to work. And it’s paid off as far as our growth so looking forward to the fall to see how that transpires. It was a good spring. It really was.”

Airline plans to play in the Benton tournament and also has other 7-on-7 games scheduled throughout June and July.

“We’re just trying to get work and get as many of these young guys as much experience as we possibly can,” Meeks said. “It’s not real football but it is live reps, throwing and catching, continuing to work on the passing game. We probably focused a little more on the running game in the spring.”

“Spring was a little frustrating,” he said. “I think we ended up getting in about six-and-a-half days out of 10 because of the weather. I don’t know if I’ve ever seen that much rain in one spring.”

Because of rain, the Tigers’ scrimmage against Haynesville was moved from Haynesville to Bossier High’s turf field. More rain fell during the scrimmage, but the teams still got some work done.

“We got a decent scrimmage in but not all we wanted because of the weather,” Moore said.

Moore also said Benton got in a productive intrasquad scrimmage.

“We invited the parents to come out and watch,” he said. “I think everybody was just hungry for sports. We saw that again in the spring game. It was raining and we still had a pretty good crowd there.”

“All in all it was a pretty good spring,” he said. “Our defense is ahead of where I thought it would be. That was a little bit of a concern especially in the secondary. But we had some guys that came back out from baseball that hadn’t been out since their freshman year who really, really made a difference back there. It made us stronger and faster.”

Benton had a couple of receivers miss time with injuries.

The running back position is one that Moore took a close look at. Caleb Hood, who made an impressive transition from quarterback to running back last season, has moved with his family to Ville Platte.

But Moore liked what he saw out of sophomores Greg Manning and Ethan Johnson.

“We’re very, very pleased with their progress,” he said.

Andy Lim also looked good at receiver but was slowed a bit by an ankle injury. Senior Pearce Russell returns and could be the go-to receiver.

“He’ll kind of set the tone in the slot,” Moore said.

“I was very impressed by what he did,” Moore said.

Senior Davis Sellers looked good at both tight end and defensive end. But Moore does have some big holes to fill on defense.

In addition to hosting its 7-on-7 tournament, Benton plans to play in the Northwestern State tournament this weekend and the Lake Hamilton, Ark., tournament in July.

The Tigers also plan to work with Huntington, Red River and North DeSoto in 7-on-7 games that focus more on running each team’s offense and defense than rolling up points in competition.

“We can actually get better instead of just running a play that works well in 7-on-7 or some defense that works in 7-on-7 but you’d never run it in a real game,” Moore said.

The Bearkats got in seven days of practice but didn’t have a scrimmage.

“Spring was more of a learning session,” head coach Michael Concilio said. “We graduated 14 seniors all of which played.

“We have a lot of new kids that we’re trying to fit in certain spots. We just elected not to play a spring game. I don’t even know if we found a spot for all of them in the seven days we worked out.”

Bossier has 10 seniors who started or saw playing time last season, so Concilio has a solid core group to work with. But what positions they’ll end up playing won’t be completely decided until August.

Concilio is hoping 7-on-7 competition this summer will help determine that. The Bearkats plan to work with Glenbrook Academy, a new LHSAA member, Magnolia School of Excellence, Lakeside and Homer.

Concilio will be looking for a replacement for quarterback Coleman Beeson, a three-year starter.

One player to watch will be senior D’Angelo Garner, who made some big plays on both sides of the ball last year.

Because of the rain, the Bucs were unable to have their Red-White intrasquad scrimmage. But head coach Jason Brotherton was generally pleased with how things went,

“It was good,” he said. “We saw what we needed to see. We found some guys we think can fill some holes for us, some guys that we lost from last year. And that’s the main thing we wanted to see.”

The Bucs will have a veteran offensive team with the return of junior quarterback Colin Rains, junior running back Dexter Smith and senior receivers Coleman Stafford and Joshua Sewell. Junior John Ecot will provide some speed.

But Brotherton said the Bucs still need to find a No. 1 receiver to replace Gage East.

Haughton has some big holes to fill on defense especially at linebacker with the graduation of mainstays Jake St. Andre, Dylan Turner and Sean Hardison,

Brotherton and his staff were focused on evaluating the younger players in May.

Haughton is playing in the Benton 7-on-7 tournament but as usual summer workouts will be mainly focused on all areas of the game.

The Panthers got in a solid two weeks of practice capped by a scrimmage against West Ouachita.

“I thought the scrimmage against them went very well,” said Coy Brotherton, now in his second year as head coach. “Just compared to where we were last year at this time it’s like night and day. Really and truly, we kind of laughed about it, but we’re further along right now than we were when the season ended last year, just being in the system that much longer. “We’re fortunate enough on offense that we’ve got eight returning starters back. That’s a veteran group. Six of our top offensive linemen are back. That’s always an advantage especially early in the season or in spring ball to have those guys ahead of the game.”

Ed Moses, who had nine catches for 160 yards in the scrimmage, looks to step into the role of featured receiver with the graduation of Jalun Reed.

“Cannon Link is doing a lot better at quarterback,” Brotherton said. “He had a good spring. Receiver Ed Moses, he developed a pretty good relationship there. Pretty excited about that.”

Brotherton also wants to get White and Richmond on the field at the same time so they could play both receiver and running back.”

“We feel pretty good about the guys up front, the signal caller and those two running backs,” Brotherton said.

Parkway plans to play in the Northwestern State 7-on-7 tournament and the Benton tournament along with continuing the usual summer workouts three days a week.

“We were short on numbers this spring so we did a few days,” Wilson said.  “We went seven out of 10. We had some boys that had to get caught up on grades. We installed a new offense and defense so it wasn’t too bad.”

The Lions didn’t have a spring scrimmage, but they are going to be able to compete in 7-on-7 games this summer, including the Benton tournament.

Wilson also said Plain Dealing plans to get together with Green Oaks for 7-on-7 games this month.

Senior quarterback/linebacker Braeden Sterling, who missed significant playing time last season with an injury, is back healthy, Wilson said. Senior Kendric Blanks is another returnee who could play a variety of positions.