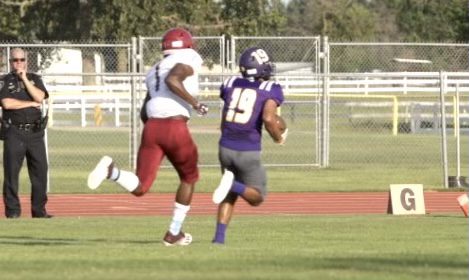 For the most part, coaches were pleased with the way their teams performed in scrimmages held Thursday and Friday.

Bossier dressed out 38 players and Johnson said he expects 22 or 23 more to join the team next week, including some projected starters.

Marquis Harris caught three touchdown passes of 52, 54 and 50 yards on catch-and-run plays. Joseph Manning, the co-MVP on the 2021 All-Parish basketball team who is out for football for the first time, caught six passes for 72 yards and a touchdown

“This is a group of guys that we have not even been with for a full two months,” Johnson said “With what we showcased today, I can only imagine what we would look like four weeks from now.”

The Bearkats defense held the Wildcats to one TD in the controlled portion of the scrimmage. Wossman scored a couple of times in the live quarter that concluded the scrimmage but Johnson wasn’t disappointed or surprised because several players were going both ways.

“My guys, they were fatigued, just tired and everything,” he said. “But they fought through it and that’s all I wanted to see. I wanted to see how well they would handle adversity. They handled it very well. The sidelines were encouraging and the coaches were coaching their butts off the entire game, keeping the kids into the game, keeping them motivated.”

Johnson said Sedric Applewhite, another standout basketball player, and Sen’tavian Ball both had some nice catches.

“I’m so excited for these young men,” Johnson said, referring to his entire team. “You can see it in the smiles on their faces. They want to be better and now they see how good they can really be.”

The Lions dressed out only 17 players to Green Oaks’ 40.

“It went well,” Wilson said. “We moved the ball really well on offense and played really well on defense with the exception of one quick out to De’Coldest Crawford that went for a long touchdown.”

Crawford was a first-team All-State receiver last season and is a big-time recruit.

Wilson said the Lions gave up one TD in the goalline portion of the scrimmage but none in the controlled segment.

Plain Dealing didn’t score but had one drive that went from its 30 to the Green Oaks 8 before stalling.

“The kids feel really good about themselves,” Wilson said. “I think they actually surprised themselves on how well they played. We’ve been teaching being a team and getting together and working hard. And it paid off for them tonight.”

Airline head coach Bo Meeks was pleased with his team’s performance against Huntington, which went 6-2 last season, on Friday at Independence Stadium.

“I thought our kids did a great job, one, preparing before the scrimmage,” he said. “I was really pleased. We flew around on both sides of the ball, made a lot of plays defensively. Offensively, we kind of grew into the scrimmage as it went on. Overall extremely pleased with how we played tonight.”

Haughton head coach Jason Brotherton said his team’s scrimmage against North DeSoto at Bossier’s Memorial Stadium was similar to past ones.

Brotherton was just glad his team got in some good work after having to cut three practices short because of lightning and heat.

Haughton and the teams that played Thursday night caught a break with a cloud cover and  temperatures in the mid-70s following an afternoon of rain. The heat returned Friday.

“We thought we’d be way behind where we needed to be than where we normally are, but I really don’t think we were,” Brotherton said. “Maybe a little behind, but I was pleased with a lot of it.”

Benton head coach Reynolds Moore was happy his team came out of its scrimmage against Minden on Friday at Tiger Stadium without any serious injuries. He said one player suffered a minor knee injury that shouldn’t keep him out of action.

“Everybody else is pretty healthy, some bumps and bruises the first time hitting somebody,” he said. “Minden is a big, athletic team. That was good for our guys to kind of get a taste of that. I know that not only are our district teams going to be that way but Northwood and Barbe starting off the season are for sure going to be that way. So getting a dose of it early on is pretty good.”

Moore said Minden did some things offensively he didn’t expect, but he thought the Tigers defense adjusted well.

“We didn’t give up a point all night,” he said. “So that’s a big, big deal to me, that they make that adjustment. They ran the ball well against us well toward the end but again it was some stuff we hadn’t worked on.”

Offensively, the Tigers moved the ball well in the controlled portion of the scrimmage that included a touchdown pass from Gray Walters to Cade Stewart. Another TD was erased by a penalty.

“In the live portion we didn’t really move it well,” Moore said. “We took the ball on the minus side of the field both times. That was a little tough. But I thought that our guys overall played well.

“Gray got rid of the ball quicker than he has … In practice I’ve been fussing at him a little bit about holding the ball too long. I was pleased with that. Greg Manning ran the ball well. Landon Duggan, new kid, ran the ball well. Cade Stewart had a nice catch for a touchdown.”

Parkway head coach Coy Brotherton liked his team’s effort in the Panthers’ scrimmage Thursday against Northwood at Lee Hedges Stadium. But he wants to to see some improvement from his defense in Friday’s jamboree.

The Panthers gave up four touchdowns, including some where Falcons receivers went uncovered.

“I think Northwood is a very good football team,” Brotherton said. “They got after us a little bit tonight. I think they’re probably a little bit ahead of where we are right now for a scrimmage.

“I saw a lot of things we’re going to have to work on and get better at. Too many mistakes on defense. Three of their touchdowns were uncontested — communication errors, just busts on the defense, just gave them a free 21 points. Things like that are fixable but it’s still frustrating at the same time.”

The Panthers were missing a handful of players, including starters, for various reasons.

“We’re hoping to be full strength in a couple of weeks,” he said. “I’d rather have kids out now than in two weeks.”

Parkway opens the Bossier Lions Club Jamboree against Benton at 5:45 p.m. at M.D.Ray Field at Airline Stadium. That will be followed by Plain Dealing vs. Bossier and Airline vs. Haughton.