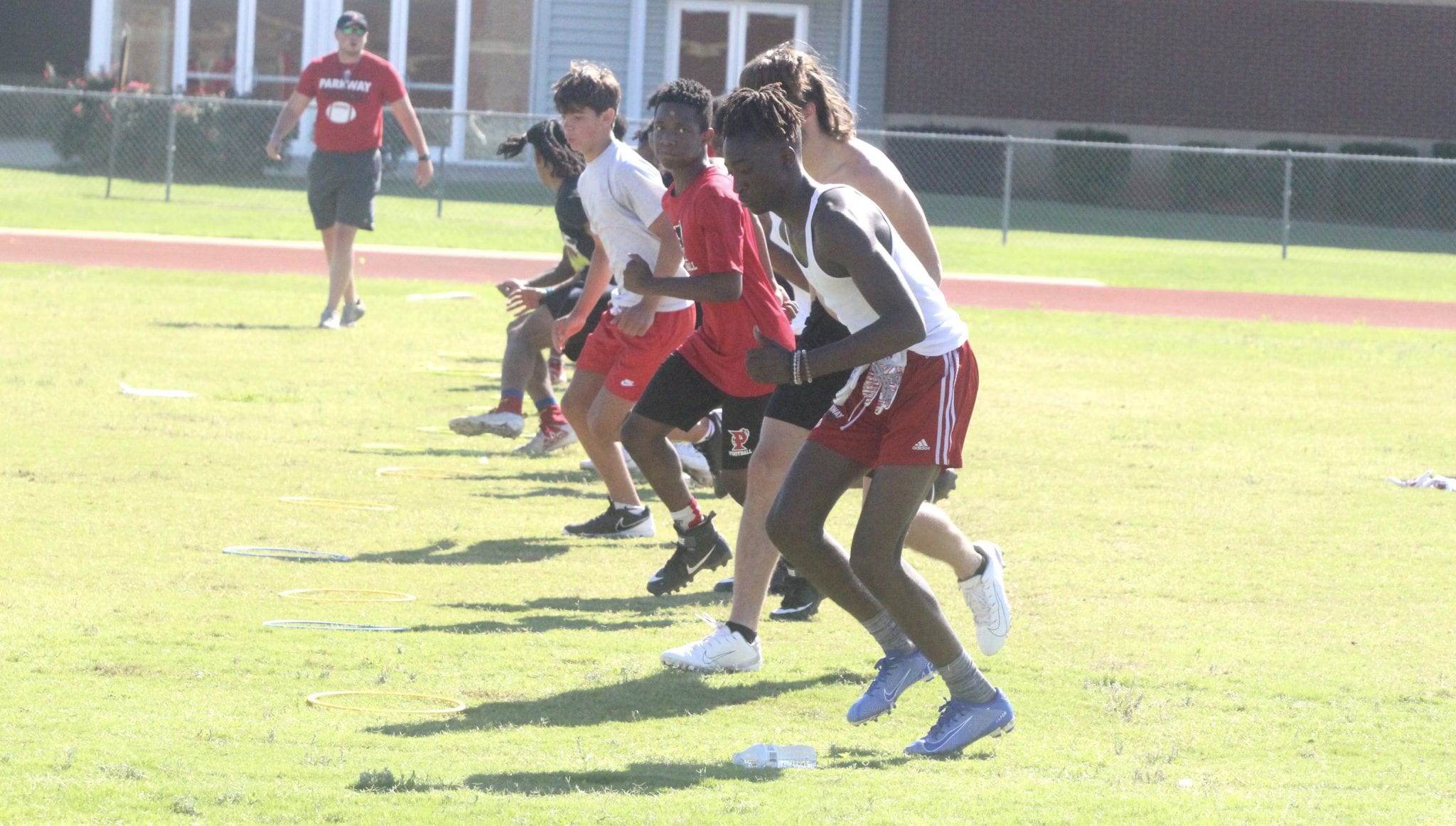 High school athletes returned to the fields and gyms last week for the first time since schools across the state shut down because of the COVID-19 pandemic in mid-March.
The restrictions and guidelines in place for summer workouts because of the pandemic took a little getting used to, but Bossier Parish football coaches said the first week of workouts went off with few hitches.
“I think considering all the protocols and all the rules and things that have to be followed I thought ours went about as smooth as it could go,” said first-year Parkway head coach Coy Brotherton. “I think it was a plan the coaches had and I think that it worked for what we needed to get done.”
In addition to conditioning and strength training, Parkway is also starting to install new offensive and defensive systems.
“We kind of have our hands full a little bit,” Brotherton said. “But I think as far as all the rules and stuff we had to meet obviously day two went smoother than day one. We got some things ironed out after that first day with just the dropoff area and kids getting in one area before practice started. We had to address that after day one. That was about our only hiccup.”
For Airline head coach Bo Meeks and Benton head coach Reynolds Moore, the best thing about starting workouts was getting to see their players in person for the first time in three months.
“It was great to see everybody again and be back together,” Meeks said.
Said Moore: “That was the thing I was missing the most. Seeing them in there, getting back to work, being around each other even though it was in small groups. Still, it was good.”
Most teams worked out three days last week for a few hours in the morning. Conditioning was a big emphasis.
“The kids are having to reacclimate,” Meeks said. “That’s a big thing too. It’s allowing us to kind of slow down, increase the breaks that we give them and allow them to work back into shape as well.
“I think that’s been really good. Just getting them back in the flow and used to the heat again. You can tell some of them have been working, but working by yourself is never like with a team being pushed by a coach. They’re working hard.”
Moore also said the three months off took its toll even on the players who have tried to stay in shape.
“Normally the first day of the summer they’ve been working out since December with one week off and then all of a sudden you come back” he said. “That three months off makes a big difference. Being smart about that is the biggest thing.”
Among the COVID-19 re-opening guidelines were temperature checks before practice, social distancing among and within limited groups and the cleaning and sanitizing of facilities and equipment.
“As far as the cleaning and stuff, it really wasn’t bad,” Moore said. “That first day we kind of figured out the best way to do it. We got into a rhythm and a pattern where we could sanitize one side of the weight room while they were using the other. It worked out really well.
“The kids handled it well. They did a really good job. Obviously it’s hard to keep them from hanging out or saying hello or high-fiving or whatever when they show up and get there, especially that first day.”
Meeks and Moore said the situation in the weight room was the biggest adjustment.
“The weight room was probably the biggest issue not being able to have a spotter so you have to do lighter weights,” Meeks said. “As compared to a body weight workout it’s still a huge improvement.”
Plain Dealing first-year head coach Christopher Wilson said his first week went well. Wilson faces a challenge that other coaches in the parish don’t have to worry about and that’s getting enough players out for football.
“It went well, really better than expectations,” he said. “We started with 14 on Monday and ended with 20. Everybody is working hard and getting adjusted to the new standard.
“Those kids were hungry to come in and work. There was no pushback. They did everything that we asked them to do. They worked hard for two hours a day and they were ready to go home.
“We’re really optimistic about some boys we’re still waiting on if they get on board and join the fold. But the ones we have there, the 20 we have, we’re excited about. They’re coming every day and working hard. We’re gradually seeing an uptick in numbers.”
On the other side of the spectrum, Parkway has 92 players signed up for football. Brotherton said an average of about 75 showed up for the three workouts last week with a high of 82.
“I was very, very pleased with that,” he said. “Then as the week went on we added a few more and then a couple of them kind of dropped off.”
Some of the players who missed were absent because they were going on vacation or playing travel ball in other sports which is not unusual.
Brotherton said a 75 or 80 percent turnout rate is “probably better than most summers” at his previous schools.
“I think the kids being off for a long time they kind of wanted to get back to something normal,” he said.
“Out of the 91 kids some of the ones we hadn’t been able to reach showed up this week. All of our kids have been accounted for. We’ve got eyes on them and talked to them and seen them. That’s kind of a good thing.”