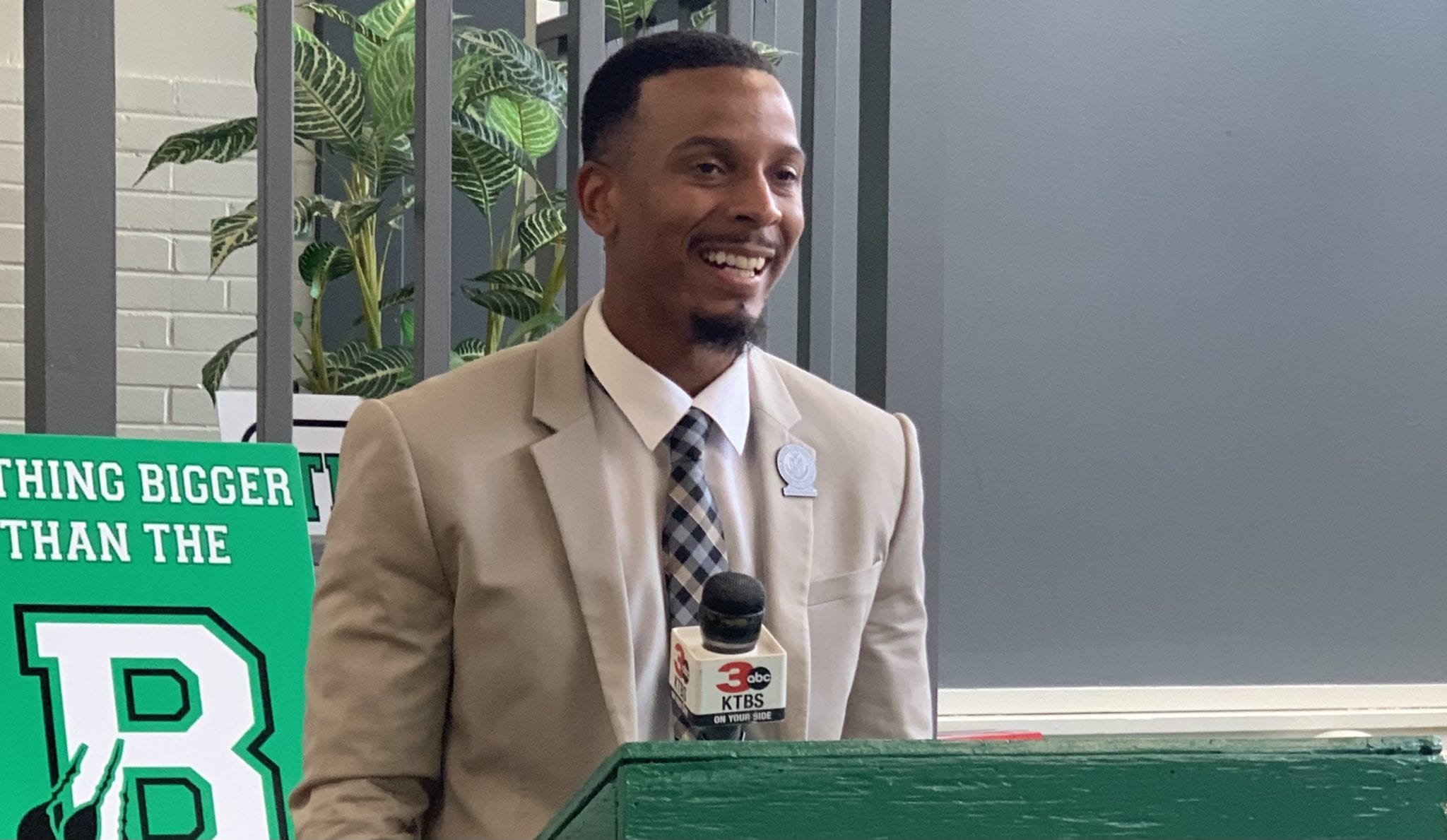 When De’Aumante Johnson found out he was going to be the next head football coach at Bossier High, he had a question for his fiancé.

The answer was, of course, no.

The 27-year-old Johnson was introduced as Bossier’s head coach Thursday afternoon in the teachers’ lounge.

Coincidentally, Johnson recently accepted a position as an assistant coach at Parkway. He played for Brotherton at Plain Dealing and was a freshman team coach at Captain Shreve when Brotherton was the offensive coordinator.

But Johnson couldn’t pass up the opportunity to run his own program.

“I didn’t think it was going to come this early,” he said.

“I can’t wait to get here on campus to know everyone around and build a relationship with these great people here at Bossier High School. As we all know Bossier is a great high school, rich tradition. A lot of great people have come through here and I’m just hoping to come along and learn its history and continue to build on a great legacy that’s already been created.”

Johnson was a standout football and basketball player at Plain Dealing for four years. He went on to play in the secondary at Grambling State, helping the Tigers win the Black College National Championship in 2016. In 2017 he served as one of the team’s captains and ranked eighth in the nation in interceptions.

Johnson has a Bachelor of Science degree in kinesiology with a sports management concentration and a Master of Science in sports administration from GSU.

After finishing his eligibility, he served on Head Coach Broderick Fobbs’ Grambling State staff as a defensive quality control coach and an assistant recruiting coordinator.

“We’re about to turn this thing inside out,” Thrash said.

When Bossier takes the field this fall, Bearkat fans will immediately notice one big change. Bossier will not be running the the run-oriented Wing-T, an offense it has been employing for years.

“We’re going to a spread,” Johnson said. “I want to be able to get these athletes out in space where they can make plays and bring some excitement to the offensive side.”

Johnson said the defensive formation hasn’t been decided yet and will be determined by him and his staff.

“Whatever we run we plan on bringing pressure and being real patient and disciplined on the back end,” he said.

Bossier has long had one of the state’s top boys basketball programs. But the football program has struggled recently with just one winning season and playoff appearance (2019, 7-4) in the last eight seasons. The Bearkats are 19-57 in that span.

One big reason for that is a dwindling number of players that has prevented Bossier from having much depth. That usually means if one player is injured it affects positions on offense and defense.

Concilio said Bossier had an average of about 21 players available for for spring practices.

So Johnson is well aware one of the challenges he faces is getting more players out for football. He plans to tackle it head on, letting potential players know they have the chance to be part of something special at Bossier.

But success on the field is only one of his goals.

“Most importantly, to help these young men become very successful in life, that’s what it’s mostly about,” he said.  “That’s the most important thing to me anyway. Football will take care of itself. If I can get these kids — my staff and I — to win in the game of life we’ve done our job. Like a great man once told me, ‘If I can save one a day I’m doing my job.’ ”

Johnson said that he has been shaped by his youth in Plain Dealing on and off the fields and and courts and his experience at Grambling State.

“It’s a very special moment,” he said.  “Small town kid from Plain Dealing, Louisiana. I love Plain Dealing. I’ll always continue to say that. Things I’ve been through and I’ve gone through as a kid growing up, things I’ve had to face being doubted day in and day out, to be able to prove to everyone I can do it and I will do it, and most importantly as long as I have God on my side, honestly it doesn’t matter what people say about me. I’ll always keep God on my side and I’ll continue to do successful things and be a certain leader in this community.”

He knows some may doubt him because of his youth. But he said it might be an advantage in relating to players that will generally be 10-to-12 years younger than him. He said that’s the way it was at Calvary Baptist. He was able to laugh and joke with them, but there was a line drawn and they knew to respect him as a coach.

Johnson thanked several people during his press conference, including his fiancé, mother, grandmother and godmother. He also thanked Calvary head coach Rodney Guin for giving him an opportunity and assistant Josh Burton for getting him together with Guin. Both were at the introduction.

Also present was former Plain Dealing coach David Bryant, who has had a big impact on Johnson’s life.

“I can go all day about him, how special he is to me in my life,” Johnson said. “The whole entire time he’s been with me he never gave up on me. He always motivated me to be the best man that I can be.”

Another big influence has been Fobbs.

“He’s a great leader,” Johnson said. “He’s played a great role in me being where I’m at today. He texted me before I made it up here and said if I needed to talk or anything to let him know. So I rely heavily on those people in my past and the people I came across.”

Bossier opens the 2021 season against Arcadia on Sept. 3 at Memorial Stadium.

But a week before that the Bearkats will play Plain Dealing in the annual Bossier Lions Club Jamboree. It won’t count in the standings, but it will have a special meaning for Johnson.

“At the end of the day I love Plain Dealing,” Johnson said. “Plain Dealing means everything in the world to me. I think I’ve said that a thousand times already. It’s going to be a weird experience playing against my hometown team, where I played at. I played on that same exact field out there at Airline High School. It’s going to feel really funny to do that, but like coach (Thrash) said, “We are Bossier.”