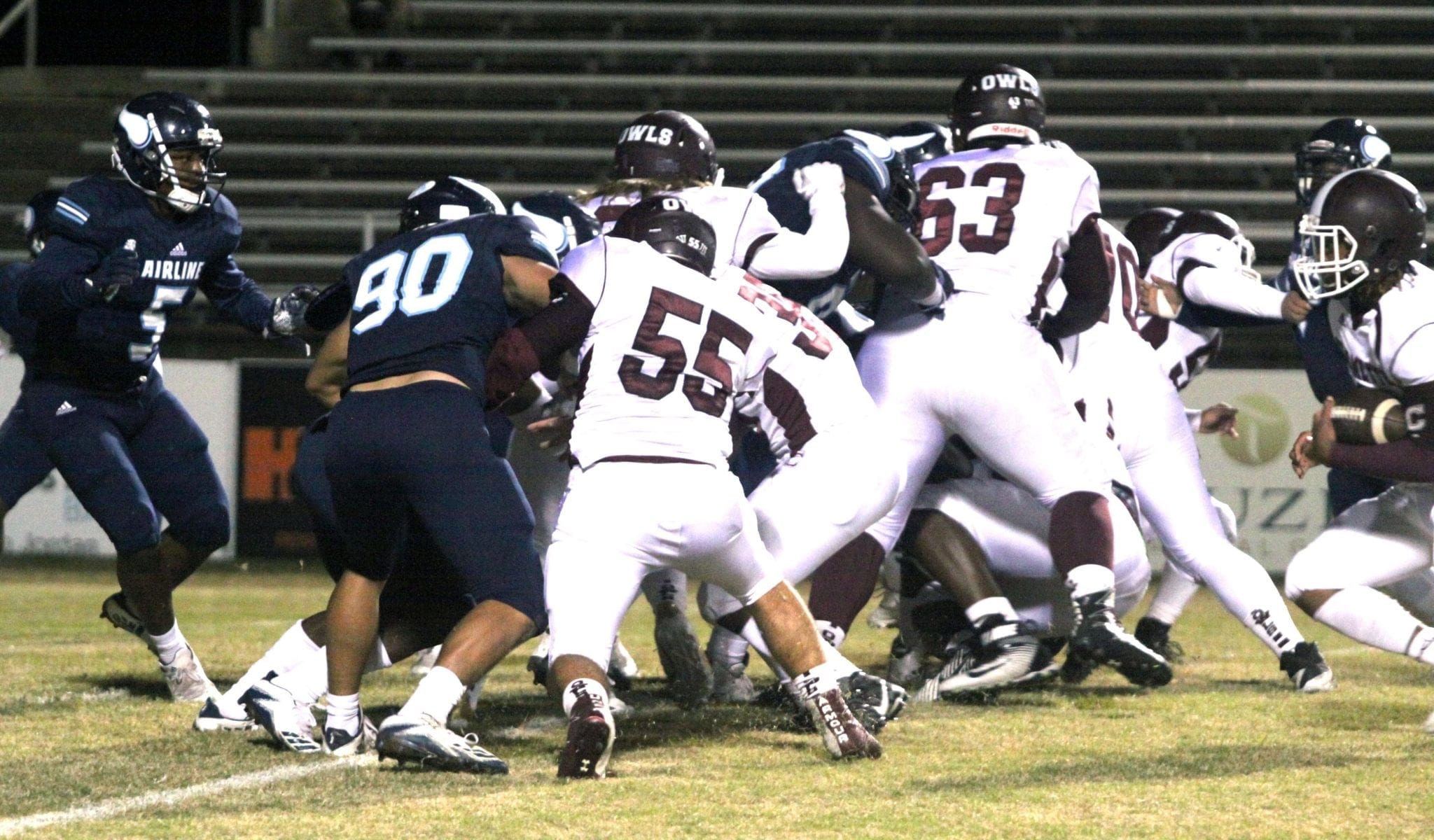 The Airline Vikings used a dominant defensive effort and strong second half to subdue the Chalmette Owls 35-7 in the first round of the Class 5A playoffs Friday night at M.D. Ray Field at Airline Stadium,

The victory was Airline’s first in the playoffs since 2012.

The game started like it was going to be the Owls’ night. After forcing a three-and-out, Chalmette drove 68 yards for a touchdown with all of that coming on the ground.

But it took Airline all of three plays to answer. Senior Coby McGee ran 62 yards for a touchdown on a sweep and Jackson Tinkis’ first PAT tied it at 7.

The Vikings took the lead for good seconds later. Darrell Evans picked up a fumble and went 52 yards for the score.

“After the first possession the defense didn’t give them anything,” Airline coach Bo Meeks said. “They just shut them down. Really proud of the effort of coach (Seth) Stowell and the defensive staff. The way the guys executed the plan was awesome.”

The defense came up big early in the second quarter. The Owls had first-and-goal at the 5 but managed just one yard on three plays and were moved back five yards because of a false start.

Chalmette attempted a field goal that was blocked by Bryson Dudensing. The Owls lost starting running back Joshua Taylor to an injury on the drive.

Airline took control for good on a sequence of plays in the third quarter.

After the teams punted back and forth twice, Chalmette had great field position with a first down at the Vikings 35.

On third-and-2, defensive lineman Matt Salinas broke through and knocked the ball loose from quarterback Josh Roper. Salinas also made the recovery at the Airline 45.

On the next play, Jordan Gladney found a wide-open McGee on a post pattern for a 55-yard touchdown and the Vikings led 21-7.

“That was where we really put it away,” Meeks said of the series of plays. “It was 14-7 then. We felt like if we could get another one the way we were playing defense we’d be in good shape. We took advantage of opportunities. Our back was to the wall down there on that fumble. We were backed up. They were down there tight. Matt forced it. Jordan hit Coby — just great protection, wide open. Big play. Then we got it back.”

Airline forced a fumble on the kickoff and recovered it.

“We just pretty much ran the ball after that,” Meeks said. “Did a great job, offensive line took over. JoJo (Davis) ran really well

The Vikings drove 59 yards for a TD. Davis and Gladney ran for first downs on third-and-short situations. On fourth-and-1 from the 12, Davis took the direct snap from center in the wildcat formation and ran for the score.

Davis scored the game’s final TD on a 4-yard run. It was set up by Thomas Williams’ 30-yard run.

Airline’s stout defefnsive performance was a team effort. Senior linebacker Zylon Newson was one of the many standouts.

“We started a little slow on offense which did have a lot to do with them,” Meeks said “They’re a good football team. We finally settled in and took control in the second half and finished it. Just a great job by our kids and our coaches. I was really proud of everybody.”