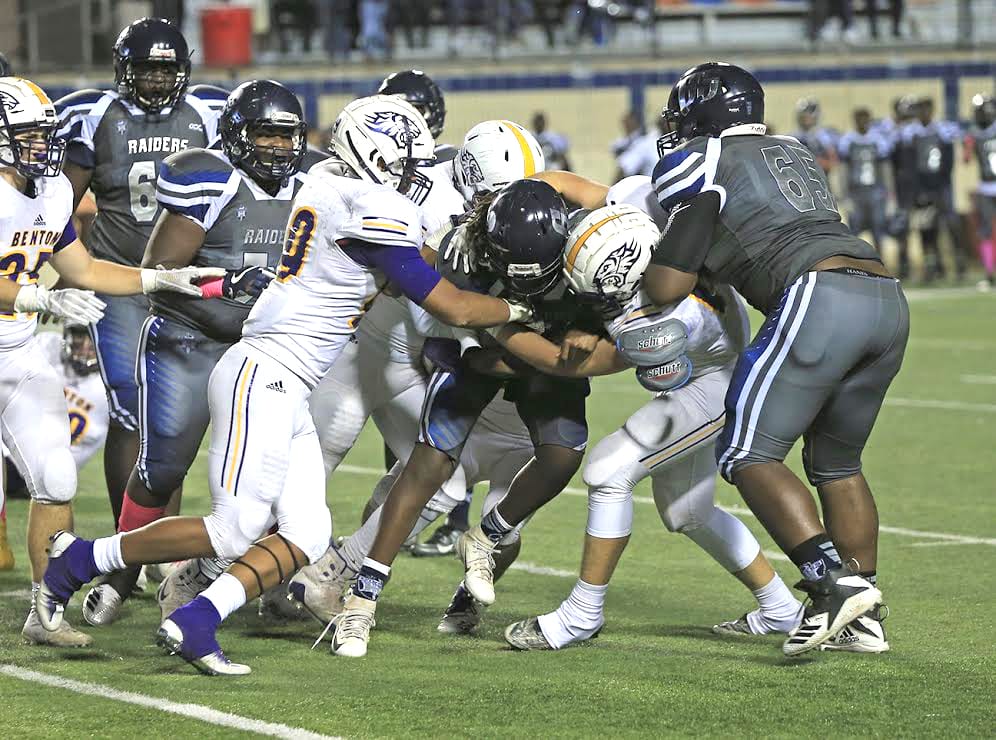 Winning close games has become the norm for the Benton Tigers in the second half of the high school football regular season.

Thursday night at Independence Stadium, the Tigers defeated the Huntington Raiders 14-12 behind an outstanding defensive effort. Benton’s last four games have been decided by four points or less, including two by one, with the Tigers winning the last three.

The District 1-4A victory over Huntington on a windy, chilly night was far from a thing a beauty, but coach Reynolds Moore will certainly take it.

Benton improved to 5-3 overall and 4-1 in district. The Tigers have won five of their last six with the only loss during that stretch by one point to undefeated and third-ranked Northwood.

Benton went into the game at No. 19 in the Class 4A power rankings. The top 16 teams host first-round playoff games. The Tigers have two games left to improve their position.

While the Benton offense struggled most of the game, the defense played “lights out,” Moore said.

The Tigers turned the ball over on interceptions three times in the first half. The Raiders started drives at the Benton 35, 10, 33, 29 and 36.

The Benton defense kept them out of the end zone every time except once. On third-and-23 from the Benton 34, J’rell Joseph hit Michael Moton for a touchdown. It was simply a great throw and catch by the Raiders duo.

Huntington only had three first downs in the first half, including the TD. The Raiders didn’t get their first first down until their fifth possession and it came on an offsides penalty.

The Tigers continued their outstanding defensive play in the second half. Huntington’s lone TD came after the Raiders recovered a fumble at the Benton 9 with about five minutes left in the game.

Benton put a lot of pressure on the quarterback throughout the game, resulting in several hurries and sacks.

“The defense played well, for sure,” Moore said. “There’s no doubt about that. They did a great job, even in some bad spots. Can’t say enough about them.

“Give up one big play and we fumble the ball right there at the 9. They scored after that. But other than that they couldn’t do anything against us.”

After Huntington’s second TD, Benton’s Sam Simmons fought off a block at the line of scrimmage and chased down Kelvyon Williams trying to run around the right end. Simmons tackled him at the 5 to preserve the two-point lead.

Simmons also had an interception at the Raiders 30 with about a minute left to seal the victory.

For the second straight week, a big key was the Tigers’ ability to convert after touchdowns. RJ Moore made both PATs.

Benton’s offense started well. After a poor Huntington punt followed by a penalty, the Tigers took over at the Huntington 20. On fourth-and-10, Clint Lasiter hit Bubba Osby over the middle for the score.

But the Tigers failed to get a first down the rest of the half. Moore said Lasiter, a sophomore who has performed well since becoming the starter in Week 3, suffered a cut on his throwing hand early in the game and hurt his ankle late in the first half on a run.

“Clint made a few bad decisions tonight,” Moore said. “He was kind of banged up, but he hung in there and played and made some nice throws in the second half.”

Both teams were hurt by penalties. Benton had a long punt return and a successful fake punt erased in the second half. Huntington had a TD pass called back in the first.

A plethora of holding penalties put both teams’ offenses in some tough situations. The large number of flags thrown also made for a ragged game overall.

Benton avoided the penalties on its second-half touchdown drive. Behind some tough running by Keldric Moody, the Tigers went 42 yards for the score. Moody capped the drive with a 14-yard run, getting some good blocks en route.

Legend Denler also had a catch, and Lasiter converted a third-and-2 with a sneak.

Moore said some of Benton’s offensive woes can be attributed to Huntington’s defense. And some of it was self-inflicted.

The Tigers will have a chance to get back in sync next Friday when they host Woodlawn. The Knights (3-4) face Bossier tonight at Independence Stadium.