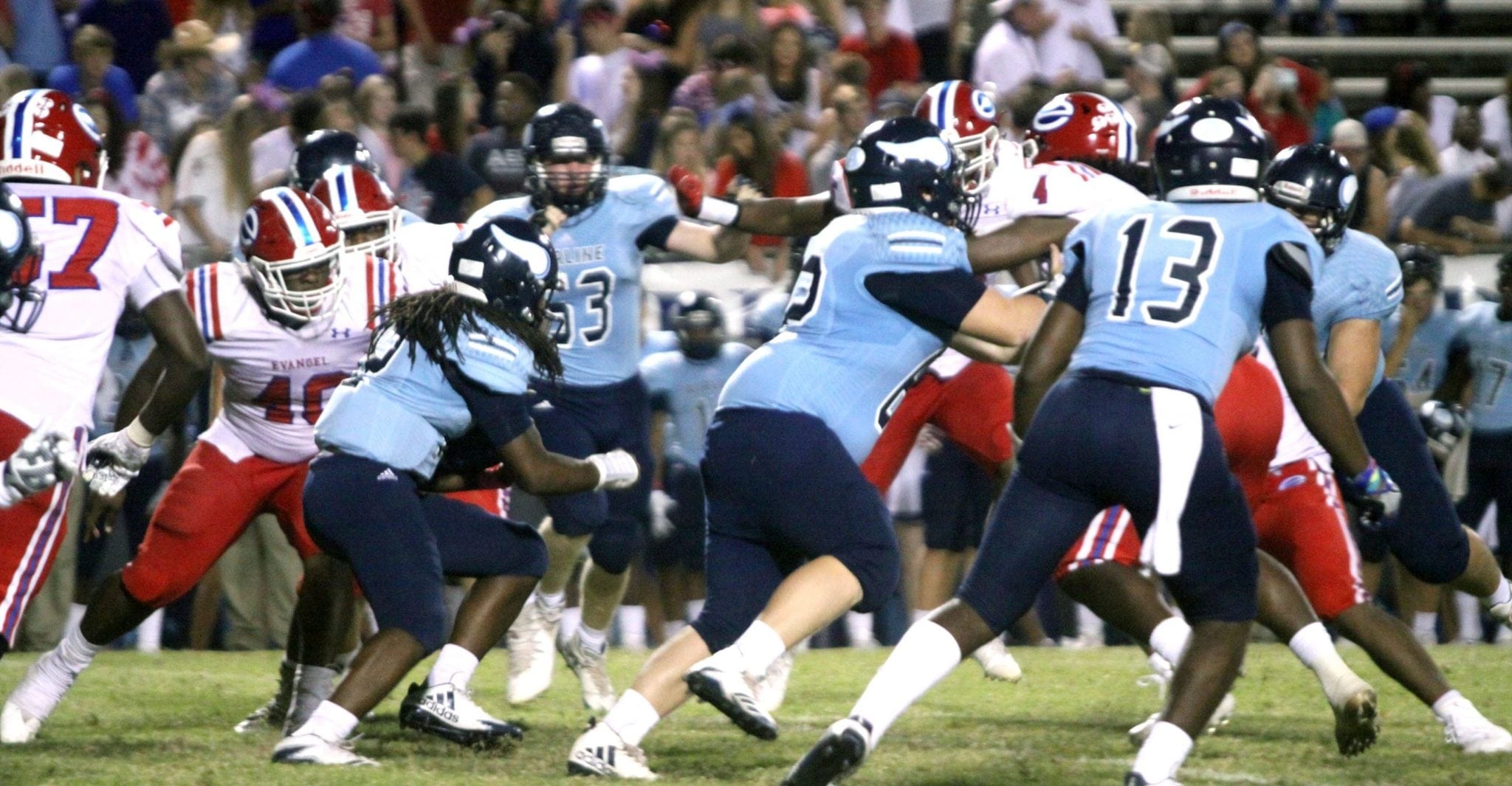 The Airline Vikings lost to the Evangel Christian Eagles 44-7 in a District 1-5A game Friday night at M.D. Ray Field at Airline Stadium.

But the score doesn’t come close to telling the story of the game.

Airline went toe-to-toe with the defending district and Division I state champions for the better part of two-and-a-half quarters. But in the end, the Eagles simply wore the Vikings down with their smothering defense.

“We played really well on defense, especially in the first half,” Airline coach Bo Meeks said. “We just couldn’t put anything together offensively. We didn’t take advantage of the few opportunities we had. We didn’t create very many.

“A lot of that is them, but a lot of it is us, too. I’m disappointed in our offensive performance tonight but really pleased with the defense.”

The Vikings scored their lone touchdown of the game in the second quarter on Brian Marshall’s 80-yard interception return. That tied the score at 7.

The Eagles took the lead for good with a TD with 13 seconds left in the half.

Evangel extended the lead to 16-7 on a safety, the result of a punt snap sailing over the kicker’s head, in the third quarter.

The passing of Blake Shapen and the running of Ar’Darius Washington and Taumage Sloan began to take its toll on the Vikings late in the third quarter.

Airline junior quarterback Brad Fream left the game with an injured left (non-throwing) shoulder midway through the third quarter and was replaced by Jordan Gladney. The Eagles picked off a Gladney pass and returned it for a touchdown.

“The second half it kind of got away from us,” Meeks said. “It was one of those deals. We fought hard. I thought we maintained our composure in what was a pretty tenuous situation. I’m really proud of them. We’ll learn from it and get prepared to go beat North Webster next week.”

Meeks said he hopes to learn more about the extent of Fream’s injury this weekend.

“Jordan is going to have to be ready to go,” he said.

The Vikings travel to Springhill on Friday to play North Webster. The Knights (2-4) lost to defending Class 1A state champion Logansport 38-26 Friday night.

Things couldn’t have started better for Bossier. Kevin Daniels hit Daniel Moore for a 65-yard touchdown on the game’s first play. The conversion attempt was no good.

The Griffins quickly answered and took a 7-6 lead.

Bossier regained the lead on Decamerion Richardson’s 5-yard TD run. But things went downhill for the Bearkats from there.

North DeSoto scored two more touchdowns in the first quarter and added three more in the second for a 43-12 halftime lead.

“It was a tough loss after a great start,” Bossier coach Michael Concilio said. “The team didn’t quit and lay down in the second half. They kept pushing. We’ve got to get ready to play BTW during the fall break.”

The Bearkats played without sophomore quarterback Isaiah Wallace-Blair, who started the first five games of the season.

Jonesboro-Hodge 32, Plain Dealing 13: The Lions suffered their first District 1-1A loss Friday night on the road