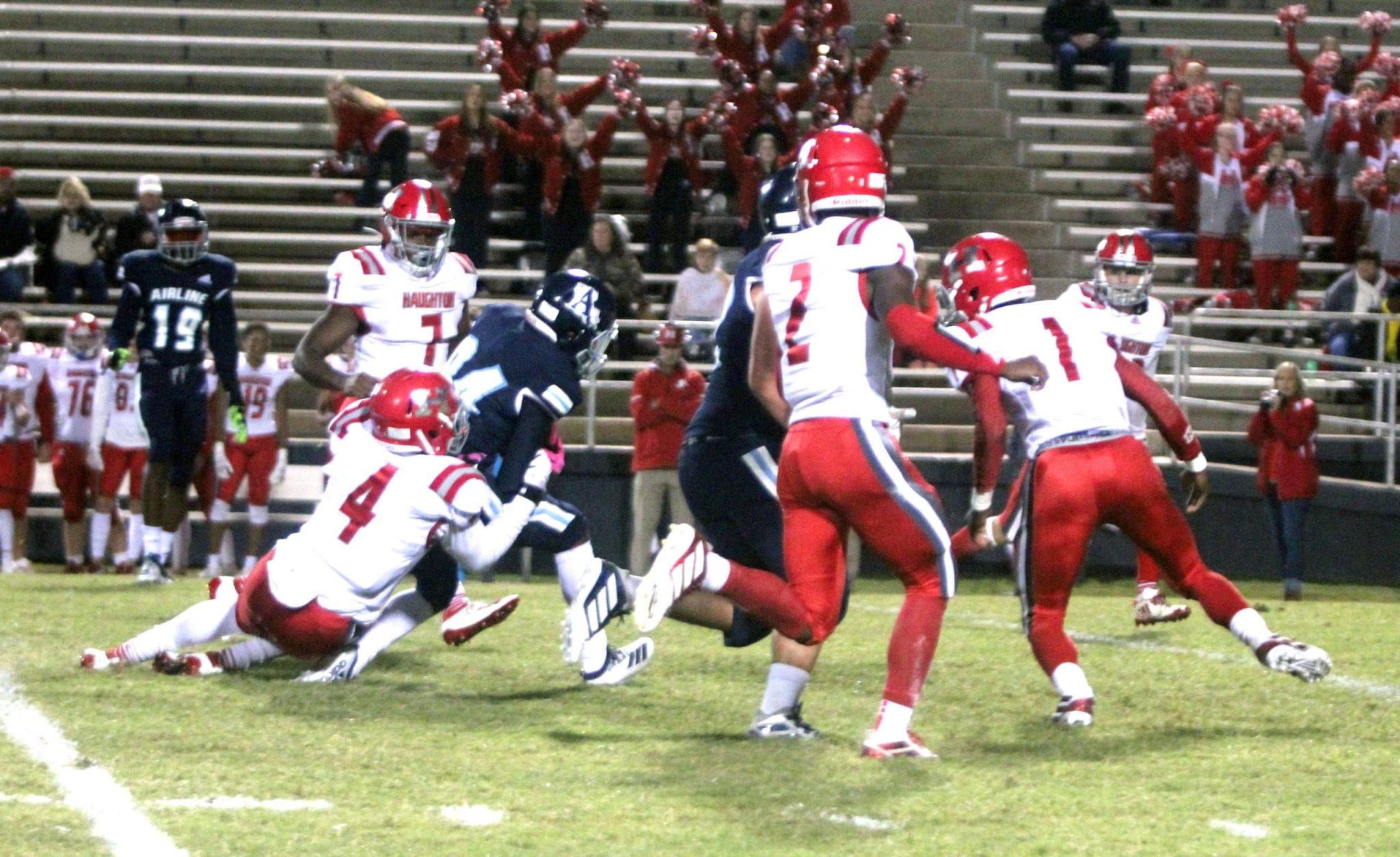 Here is a quick look at Friday’s first-round playoff games involving Bossier Parish teams. All games kick off at 7 p.m.

No. 25 Southside (6-4) at No. 8 Airline (8-2): Southside is located in the Lafayette Parish town of Youngsville. It opened in 2017 but this is the Sharks’ first year of varsity football.

Southside finished 3-4 in District 3-5A, which includes No. 1 seed Acadiana. Two other teams in the district made the playoffs.

The Sharks allowed 60 or more points three times in district play but also scored 63 points once.

Airline, the District 1-5A co-champion, is back in the playoffs after a one-year absence. The Vikings had made the playoffs in Bo Meeks’ previous seven seasons as head coach. Two years ago, they reached the quarterfinals.

Airline is led by junior quarterback Alex Garcia, who has passed for 2,250 yards and 24 touchdowns. Big-play receiver Daniel Smith has caught 50 passes for 870 yards, an average of 17.4 yards per catch, and 14 touchdowns.

The Vikings averaged 25.7 points in the regular season. They scored at least three touchdowns in all but one game. Airline allowed 17.1 points per game with a high of 49 against Ruston in a Week 3 loss.

Last year, the Lions lost in the second round of the playoffs.

Haughton was the only Bossier Parish team to make it past the first round last year. The Bucs lost to John Ehret in the second round.

The defense has played well all season. The Bucs have allowed just 14.2 points per game and only two opponents have scored 20 or more.

Acadiana won District 3-5A with a 7-0 record. The Wreckin’ Rams, who utilize an option offensive attack, are averaging 49.4 points per game and allowing 17.1. In district play, they averaged 58.9 points per game. Acadiana scored 82 in one game and 70 in another,

The Wreckin’ Rams’ closest game was a 28-20 victory over Ruston in Week 2. Their closest district victory was 35-21 over Comeaux in Week 6.

Benton is in the playoffs in its first year in Class 5A. The Tigers lost in the first round of the Class 4A playoffs last season.

After a tough midseason stretch, the Tigers finished strong, winning two of their last three. They also had Airline on the ropes in Week 9.

Sophomore quarterback Caleb Cassidy has steadily improved since taking over at midseason and was instrumental in last week’s 18-15 victory over Natchitoches Central that earned Benton the playoff berth.

The defense, led by middle linebacker Ashur Hall, has played well in the stretch run. Hall got a chance to run the ball last week with leading rusher Cameron Barnett out with an injury.

The Pirates closed the regular season with a four-game winning streak, including a 47-40 non-district victory over Lake Arthur last week. They averaged 36 points per game during the streak.

Bossier is in the playoffs for the first time since 2012. The Bearkats’ last playoff victory was in 2011.

Two Bearkats — Decamerion Richardson and James Davis — rushed for more than 1,000 yards during the regular season. The Bearkats averaged 36.8 points per game.

Delta Charter lost in the first round of the playoffs last year.

Plain Dealing also lost in the first round last season. The Lions are looking for their first playoff victory since 2016 when they reached the quarterfinals.

Plain Dealing quarterback Ken Gay and receiver Darrien Perry were one of the top pass-catch combinations in the regular season. Gay passed for 2,013 yards and 24 touchdowns. Perry caught 70 passes for 887 yards and 10 touchdowns.

Gay has also rushed for 345 yards and six touchdowns.

Ladavious Scott was the Lions’ top rusher in the regular season with 533 yards.