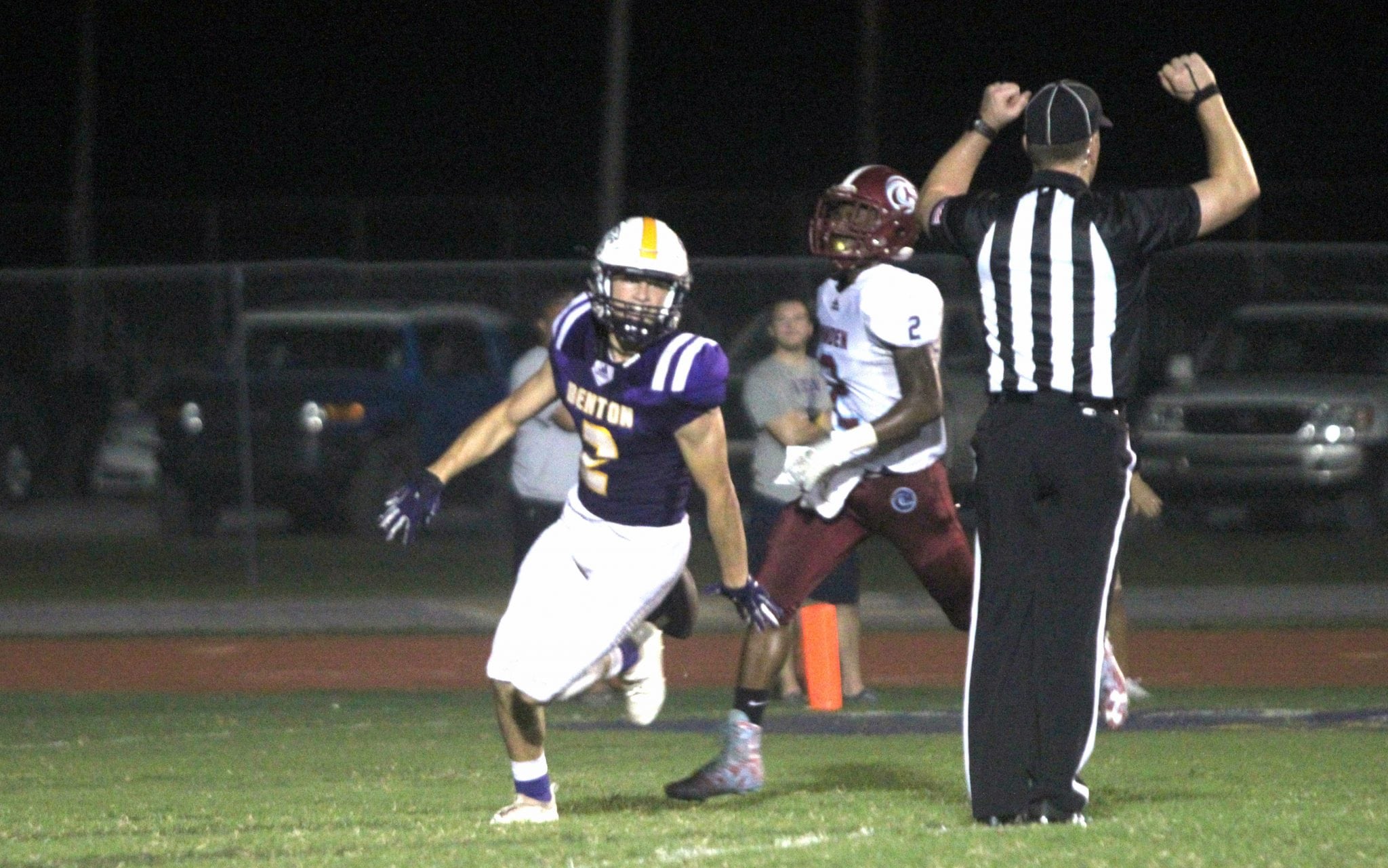 Unlike the 28-27 loss to Northwood in Week 5, the Tigers came all the way back this time. Sophomore Clint Lasiter completed two touchdown passes to Legend Denler in the final five minutes of the game to lift Benton to a 27-23 District 1-4A victory Friday night at Tiger Stadium.

Lasiter’s final touchdown pass to Denler over the middle came with 1:18 left. It was set up by an interception by Jayree Anderson at the Minden 39. Trent McLaughlin was under a heavy rush when he threw the ball across the field.

Lasiter completed two passes to Denler to the 17. On first down, he rolled to his left and was chased by several Minden players as he looked to get rid of the ball. He was hit, the ball fell to the ground and Minden jumped on it. The Tide celebrated what they thought was a fumble recovery.

But the officials ruled Lasiter’s arm was going forward and therefore it was an incomplete pass.

After the game, Minden coach Spencer Heard told the Minden Press-Herald after watching the play live and on video he thought it was a bad call.

Moore said from what he could see from the sideline, it was close.

“Thought it was bang-bang,” he said. “I know his arm was coming forward. I just don’t know where the ball was.”

Moore understood Heard’s frustration, having been in his shoes in similar situations in the past.

Minden took a timeout after the play with 2:14 left. After Lasiter ran for 2 yards, Benton called timeout with 1:24 remaining. On the next play, Lasiter drilled the pass to Denler for the score.

The Tide still wasn’t out of it. A Benton interception was nullified by pass interference. Another interference call moved the ball to the Benton 38. But the Tigers came up with two sacks, including one on fourth-and-14 with 29 seconds left.

Moore said the idea of “Benton Tough” has been key to both of Benton’s rallies the past two weeks.

“(Assistant) coach (Scott) Reeder talks to all of guys in the weight room about being Benton tough, about what that means, the Tiger pride,” he said. “They showed that tonight and I’m real proud of them.”

Denler caught three touchdown passes, including a 35-yarder to get the Tigers within three with 4:54 left to play. He also scored the Tigers’ first TD on a 41-yard catch.

Denler was Bossier Parish’s leading receiver in passing yardage in the regular season last year. But he had been somewhat quiet this season with just 10 catches for 110 yards and one TD coming into the game.

He made a lot of noise Friday night, finishing with six catches for 126 yards.

Benton sophomore receiver Jackson Illingworth made one of the biggest plays of his short career early in the third quarter. He caught a short pass near the Benton sideline and broke loose for a 64-yard touchdown to give his team a 13-10 lead.

Minden then put together its only long drive of the game, going 72 yards for a touchdown to go ahead 17-13.

Later in the quarter, Benton went for it on fourth-and-one at its 43. The Tide’s AJ Lister scooped up a fumble in the backfield and raced 35 yards for the TD to give Minden the 23-13 lead.

Benton missed a couple of scoring opportunities in the second half, failing on fourth-down attempts at the Minden 24 and 25.

The first half was dominated by defense. Minden didn’t get a first down until early in the second quarter. The Tide’s lone touchdown was a 7-yard interception return. An interception also set up a 39-yard field goal on the final play of the half.

Lasiter more than made up for those mistakes in the second half. According to stats kept by Mark Chreene’s Minden radio crew, Lasiter completed 18 of 31 passes for 280 yards and the four touchdowns.

On the 35-yard touchdown pass, he scrambled to his left then had to reverse field before firing to Denler across the field.

“When he got over here to this sideline and rolled back the other way to his right, threw that ball probably over 60 yards there,” Moore said. “Legend came back to it. That was incredible. You just watch that, it’s pretty impressive.”

Bubba Osby had six catches for 59 yards. He also played defensive back most of the second half after four-year starter Sam Simmons was injured on an interception return.

Moore praised the play of the entire defense, which limited the Tide to 142 total yards. He was especially pleased with the play of Jeremy Hall after Simmons went down.

“We gave up an interception return for a touchdown, a fumble return for a touchdown,” he said. “Our defense really played outstanding especially in the second half when we were without a four-year starter right there. Hopefully we’ll get him back next week. I can’t say enough about them, just the resilience, just to stay in there and fight. It’s really cool for these kids.”