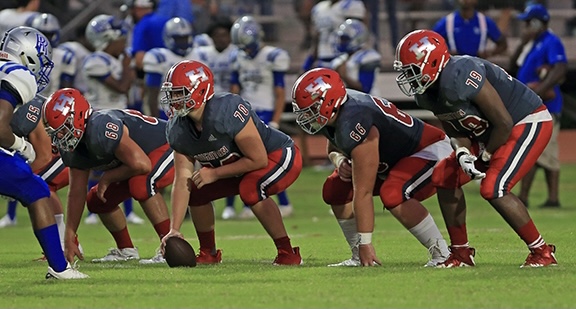 With about eight minutes to play in their season opener against Class 2A Red River Friday night, the Class 5A Haughton Bucs were down 15 and they didn’t have the ball.

It looked like a big upset was going to happen at Harold E. Harlan Stadium.

But the Bucs had other ideas. After struggling on defense the entire game against a talented Red River offense, Haughton came up with three big stops.

The Haughton offense, which did not struggle, scored three touchdowns and the Bucs pulled out a 55-49 victory over a game Bulldogs squad.

The final TD came on a 14-yard throwback from Jalen Lewis to quarterback Colin Rains with 1:15 left. Haughton then recovered a fumble on the kickoff and ran out the clock.

“The kids kept fighting and playing hard,” Haughton Head Coach Jason Brotherton said. “I’m very, very proud of that. But we’ve got a long way to go to get where we need to be.”

Haughton had to replace nine starters on defense. Three starters missed Friday’s game because of either COVID-19-related issues or injury.

“You get a game where it’s an absolute shootout; you got people cramping up,” Brotherton said. “There  ended up being people in that game playing that you look up and you’re like, man, I never would’ve thought that guy would’ve got into the game tonight.”

But Brotherton isn’t into making excuses. He had high praise for Red River.

“They played great,” he said. “They gave us their best shot. They were definitely a formidable opponent. They probably deserved to win the game truth be known.

Smith completed 16 of 26 passes for 400 yards and six touchdowns. He also rushed for 85 yards.

Red River also had a pair of tall receivers that proved to be a challenge.

“Basically, any time they got in the open field they just about scored,” Brotherton said “We couldn’t tackle them. We couldn’t even slow them down.”

Rains and the Haughton offense were just as impressive. The Bucs racked up 458 total yards, and Rains had a hand in seven touchdowns.

Joshua Sewell caught eight passes for 98 yards. He had touchdown catches of 31 and 23 yards in the fourth-quarter comeback.

Lewis had five catches for 56 yards. John Ecot had only one catch, but it was for 72 yards and a touchdown on the first play of the game.

Dexter Smith rushed for 63 yards on 14 carries and scored one TD. He also caught three passes for 39 yards.

The Bucs executed the hook-and-lateral play to perfection for their final TD of the first half. Rains passed to Sewell for eight yards to the Red River 21. Sewell lateraled to Smith who took it the rest of the way.

Haughton moves up a couple of classes in competition next week. The Bucs face Class 4A Northwood on Friday at Jerry Burton Memorial Stadium. The Falcons lost their opener to Benton 12-7 Thursday night.