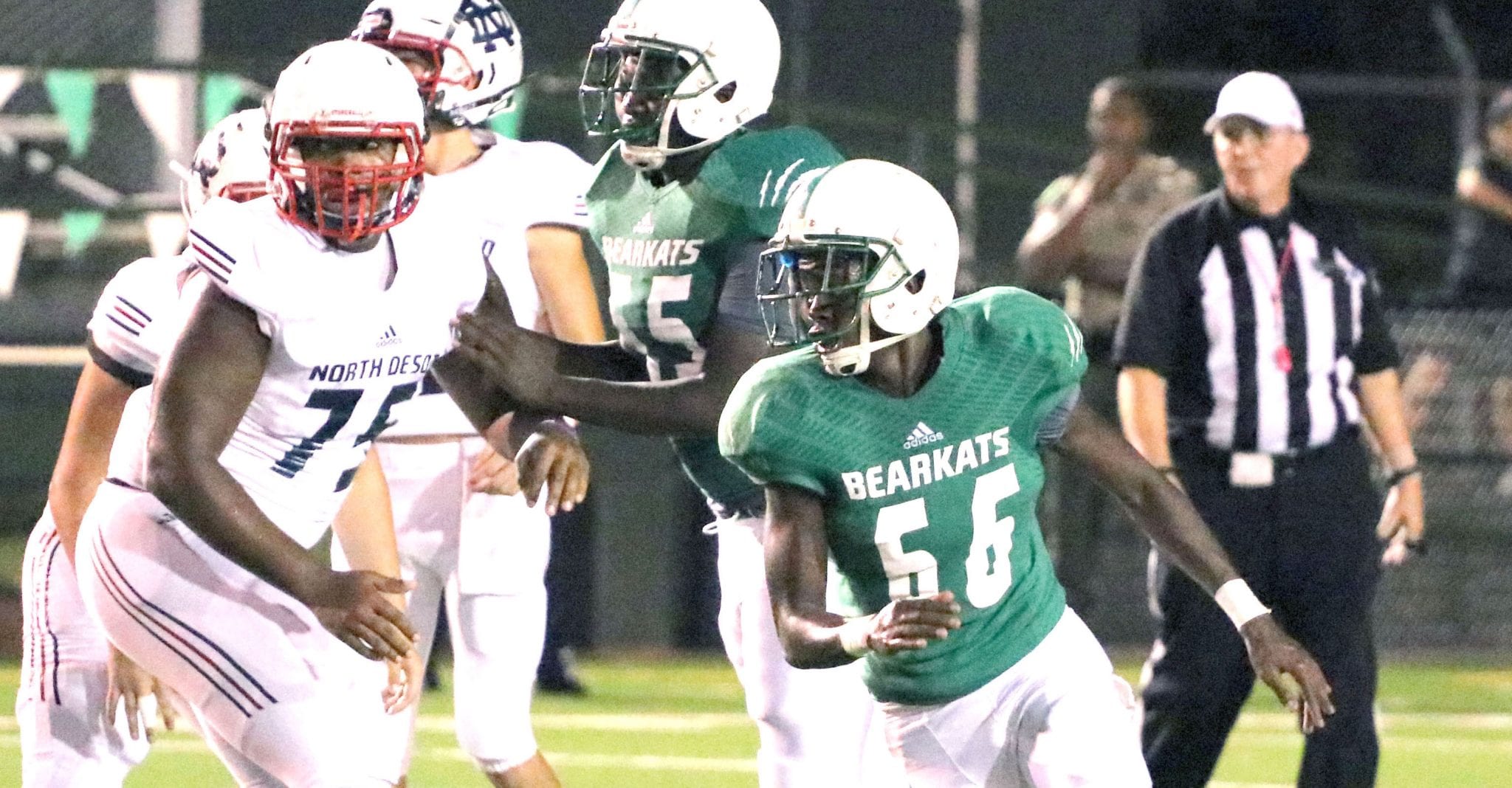 When Bossier High senior Fred Moise was a little boy growing up in Haiti, soccer, known as football there, was — and still is — the country’s most popular sport by far.

But when his family emigrated to the United States, it didn’t take long for Fred to become acclimated to the American version of football.

When he was a sixth-grader at Rusheon Middle School, a coach noticed that Moise had some athletic ability during a P.E. class.

The coach suggested he try out for football his seventh-grade year.

“I came out to the tryouts and ran 40s (40-yard dashes), and there were some of the drills I never knew about because back home we play soccer,” Moise said.

He made the team.

“I was surprised because I was not that good,” he said. “But I guess he saw something in me. I just started learning the game and I started liking it.”

Now, five years later, Moise is about to enter his senior season as a player at Bossier. Despite lacking the size of players that usually play the position, he was a lineman on both sides of the ball the last few seasons.

This season, head coach Michael Concilio said Moise will play there some again, but defensive back will be his primary position.

It’s there that Moise made his biggest impression during spring practice and summer workouts — big enough to earn a scholarship offer from Louisiana College.

“Fred just fit what they wanted,” he said. “They weren’t looking for the best athlete. They were looking for somebody to come in and be a good locker room guy, a leader, which he is for us.”

“It means a whole lot,” he said. “I thank God first, always. He has blessed me with the opportunity to play college ball, getting this offer from Louisiana College. It’s been a rough ride, going to sleep wondering if high school is going to be it, am I going to get a chance to play football in college because that’s always been my dream.”

Of course, Moise is focusing on this season first. Bossier has been struggling recently. The Bearkats, who went 1-9 last season, have moved down to Class 3A from 4A.

Moise strongly believes Bossier has what it takes to turn things around. In District 1-4A, the Bearkats competed with teams that typically had two to three times more players. District 1-3A will still be tough, but the number of players will generally be closer to equal.

“This is our year,” he said. “We’ve worked for it. It’s been three years we’ve been in the classification with more players. They’ve had numbers on their side. I feel like coming into this new classification, it feels like a league we can play in. I have faith in this team.”

Whatever obstacles Moise and Bossier face, they won’t be anything like what his family had to deal with in Haiti, a country of about 11,000,000 that shares an island with Hispaniola in the Caribbean.

Moise said his family emigrated when he was “about 9 or 10” not long after a major earthquake killed, according to some estimates, more than 200,000 and left more than 1,500,000 homeless.

“That was very hard for us, a lot of months sleeping in the tent,” he said.
Moise said Haiti was a prosperous country when his parents were younger, in the 1960s and 70s, but political strife and other factors eventually made it unstable and resulted in challenging economic conditions.

Moise’s father was an engineer who worked for large corporations involved in construction. His mother also has a strong educational background.

Just before the family emigrated, Moise said thieves broke into his father’s two-story house. To escape, he had to jump off a balcony, which resulted in a broken ankle.

Moise was living with his grandmother at the time, a few miles from the house. He said his mother drove to the house around 4 a.m. while the thieves were still there, found his father hiding and in pain, and took him to the hospital.

“I really look up to my mother for that,” Moise said. “She’s very brave.”
Doctors were able to repair the damage and his father began recuperating. But he still had debris inside the ankle from crawling to the hiding place and more surgeries were needed, Moise said.

There was some concern his father might lose the foot and more surgery was needed. The decision was made to go to Miami for further treatment.
The family stayed in Miami for a few months for follow-up treatment.
Before the incident with his father, Moise said the family had often travelled to the U.S.

After returning to Haiti, the family decided it would be best to return to the U.S. for good because his father still needed follow-up treatment.
The economic and political situations in Haiti were also reasons for the move, Moise said. The family believed it would have a better chance to prosper in the U.S.

After a stint in Miami, Moise and his family settled in Northwest Louisiana.
But Haiti still has a prominent place in his heart.

“At the end of the day, I love Haiti and I always will,” he said. “This playing ball, my love for my country I channel it through sports and when I grow up I can come back and give back to my people,” he said.

“I know they’ve been through a lot. The Haitians are a strong-willed people. I show that a lot through my playing. If I’m hurt or if there is something bothering me or I can’t go anymore I think about people back home. That just gives me the extra fuel.”

Based on what he’s seen of Moise the past few years, Concilio believes he has what it takes to achieve his goals.

One way he leads is by example.

“Fred hasn’t missed a day in the summer workouts in two years,” Concilio said. “We offered 26 days this summer and Fred didn’t miss a day and he didn’t miss a 7-on-7.”

Concilio said Moise is “extremely proud” of his native country, but he’s made the most of his time living in the U.S.

“It’s just phenomenal for a kid who’s spent half his life in America to understand American values and manners,” he said. “Some kids live here all their life and they still can’t act right.”

It’s been awhile since Bossier has had a player receive a scholarship offer before his senior season.

“I don’t know if I’ve been more excited about a kid getting this offer than Fred,” he said.

Bossier principal David Thrash said Moise is “one of the greatest leaders on our campus.”

“He has all the attributes you look for in a young man,” he said. “He loves his school and is a great representative of what Bossier High is all about — relationships and respect.”

Moise said he has loved his time at Bossier.

“It’s a big family,” he said. “Everybody knows everybody. There’s big support. You feel welcome. That’s what I love about it.”