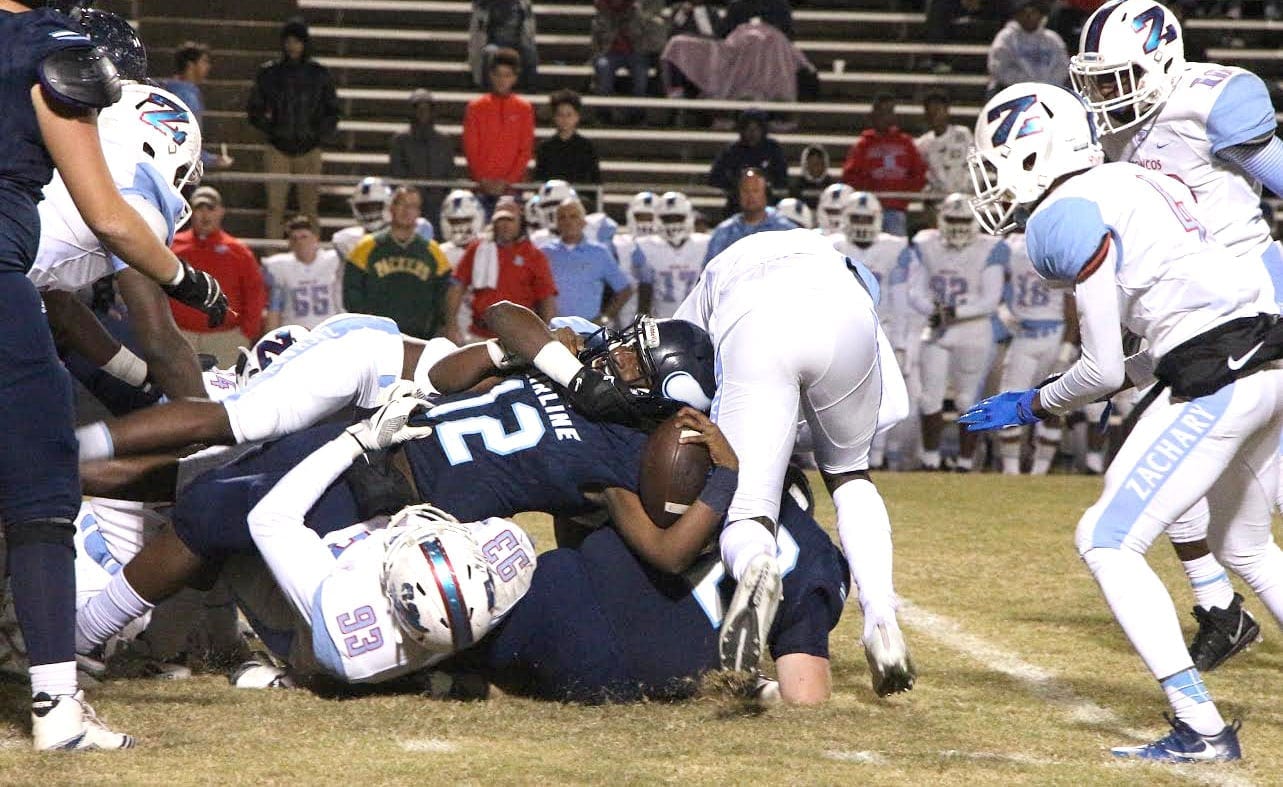 After three quarters Friday night at M.D. Ray Field at Airline Stadium, it looked like the Airline Vikings just might be on their way to another upset in the Class 5A playoffs.

Airline, the No. 12 seed, had scored 14 straight points against the No. 4 Zachary Broncos to turn a 24-10 halftime deficit into a tie game.

The large crowd on the home side of the stadium was hyped and momentum was on the Vikings’ side.

But it wasn’t meant to be.

Starting at their own 10, the Broncos drove to a 45-yard field goal by Martell Fontenot. Zachary then picked off a Jordan Gladney pass and drove 34 yards for a touchdown with 3:27 left to extend the lead to 34-24.

That would be the final score of the quarterfinal game.

The Vikings had a six-game winning streak snapped. The Broncos won their eighth straight.

Airline turned in a gutsy effort against a Zachary team that outscored its first two playoff opponents 76-0 and allowed just 13 points in the previous six games.

“I’m proud of our guys,” Airline coach Bo Meeks said. “I told ’em after I couldn’t be more prouder if they had one. We dug a hole and battled back against a great football team. They’re very good. We couldn’t make the plays in the end. Just really proud of the guys and the way they battled and what they did for our program.”

Airline’s nine wins were the most since the Vikings won 10 in 2012. That was also the school’s last quarterfinal appearance.

Meeks said the seniors deserve a lot of credit for that success.

Airline was victimized by three long pass plays for touchdowns in the first half.

Zachary sophomore quarterback Keilon Brown hit Trea Shropshire for 53 and 50 yards and R.J. Allen for 55. Fontenot kicked a 32-yard field goal to give the Broncos a 10-0 lead.

Airline took advantage of a muffed punt for its first points, a 26-yard field goal by freshman Jackson Tinkis early in the second quarter. C.J. George caught a 33-yard pass in the drive.

The Vikings cut the Broncos’ lead to seven on a 47-yard pass from Gladney to Nate Fullilove with 11:01 left in the second quarter.

Zachary answered with the 52-yard pass to Shropshire for the 24-10 halftime lead.

“We didn’t execute well on offense,” Meeks said. “Both of those instances, offensively and defensively, had a lot to do with them. A combination of things. But we came in at halftime and kept our poise and came out ready in the second half and battled back. They had a great drive to get that 3 when we tied it up and we turned it over there just trying to make a play.”

After the second one, the Vikings drove 77 yards for a TD.

Senior Coby McGee went 28 yards with a screen pass and ran for a first on fourth-and-2. Gladney converted a fourth-and-3 on a run and scored from 2 yards out.

The Vikings tied it with 15 seconds left in the third quarter on Brandon Marshall’s 40-yard interception return and Tinkis’ PAT.

Gladney, a junior who replaced injured starter Brad Fream in the sixth game of the season, completed 21 of 33 passes for 246 yards.

McGee, one of the top performers in the area this season, caught nine passes for 80 yards.