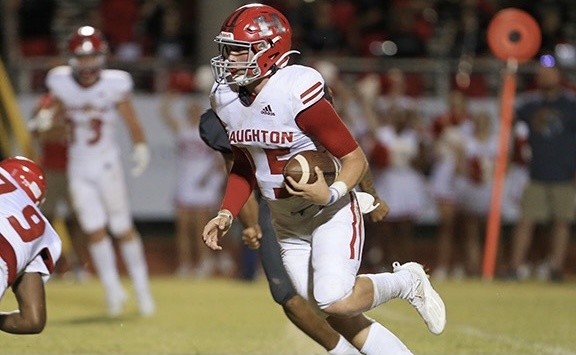 The Haughton Buccaneers lost to the Northwood Falcons 27-20 Friday night at Jerry Burton Memorial Stadium, but there was a silver lining.

“The one thing I try to sell our kids on is it’s no fun to lose and it hurts worse than it did last week, but I told them we’re a better football team right now than we were last Friday night,” said Head Coach Jason Brotherton.

“You got a different result on the scoreboard, but as far as where our team is I thought we improved a lot from last week to this week so that’s the positive that we’ll take out of it and we’ll get back to work this week.”

The Bucs (1-1) opened the season with a 55-49 victory over Class 2A Red River, avoiding an upset with three unanswered touchdowns in the fourth quarter.

Missed opportunities, including two dropped passes and an overthrow that would’ve likely been touchdowns, cost Haughton against Northwood (1-1), Brotherton said.

“I think we had three different plays if we catch them they’re walk-in touchdowns, long touchdowns too,” Brotherton said. “So those things you go back and you look at that (and) you say, man, if we make those three plays you win for sure.

“Truth be known probably if you make two of them you win and you may win if you make one of them. But that’s the way it goes sometimes. We haven’t had a lot of games where we didn’t make those plays recently so that was new for us.”

The Bucs also failed to score after putting together some impressive drive. On its first possession, Haughton tried a fake field goal that didn’t work.

In the third quarter, the Falcons ended another long drive with a fourth-down stop. At that point, the Bucs led 14-13.

Northwood gained the momentum and scored twice to go up 27-14 with 4:55 left in the game.

The Bucs recovered an onside kick but Rains was sacked three straight times and Haughton couldn’t convert a fourth-and-18.

Northwood scored on all three of its second-half possessions, but Brotherton was pleased with the progress his inexperienced defense made over Week 1.

“We never could get a stop defensively but we did eliminate the big plays,” he said. “They really didn’t get any big plays against us. We got down to some third downs and had a chance to stop them. We  just didn’t get it done.

Rains completed 13 of 23 passes for 189 yards. He threw a 54-yard touchdown pass to Coleman Stafford.

Rains also led the Bucs in rushing with 79 yards on 16 carries. Jalen Lewis had four catches for 54 yards.

The Bucs had 294 yards total offense.

Union Parish 43, Airline 20: The Vikings couldn’t dig out of a 23-0 hole in the first half in the loss to the Farmers in Farmerville.

The Vikings close non-district play at Ruston on Friday. The Bearcats (0-1) face Oxford, Miss., in The Battle on The Border on Saturday at Independence Stadium.