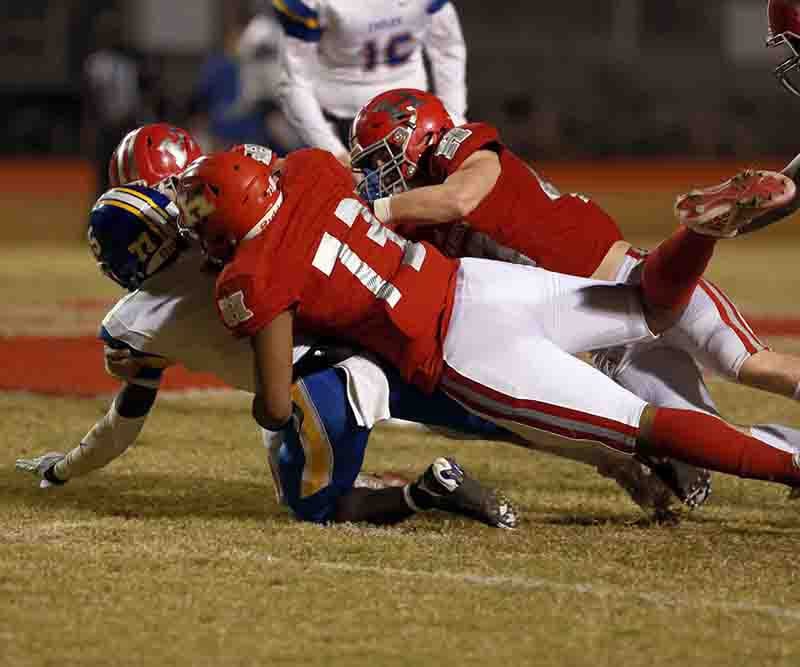 Haughton may not have played a flawless game against Live Oak in the first round of the Class 5A playoffs Friday night, but the Bucs came mighty close.

“We played well. We really did,” Haughton head coach Jason Brotherton said. “We had a good plan the coaches put together. Pretty good execution by the kids. I thought we played pretty good in pretty much every facet of the game. I’m going to have to watch the film. I’m sure there is some stuff we need to improve and get better at. But for the most part we played pretty well everywhere.”

Here are a few examples of that.

— The Bucs didn’t have a turnover.

— The Bucs were penalized only twice for 20 yards.

— The Bucs punted just once.

— Live Oak drove 70 yards for its field goal; the Eagles had 25 the rest of the game.

Even though it felt like Haughton was in control, the Bucs led just 10-3 at the half.

For all intents and purposes, Haughton put the game away in the third quarter, scoring on their first two possessions.

After Carter Jensen boomed kickoffs into the end zone, the Eagles started on their 20. Haughton forced two three-and-outs. The Bucs then took advantage of short fields each time.

Colin Rains threw a pass to Joshua Sewell in the flat and he went down the visitors’ sideline 11 yards for a touchdown. Dexter Smith ran 12 yards for a score. Jensen’s third PAT made it 24-3.

The Bucs had five possessions in the second half. They scored on three, including a 35-yard pass to Elijah Rochon on third-and-18. They ran out the clock with backups on the field on their final possession.

“We felt good at halftime even though the game was close,” said Brotherton, whose team has won seven in a row. “We’ve said all year our kids are comfortable playing close games. I know that ended up not being close but it was a close game for the first half. We’ve grown accustomed to that. We feel comfortable playing in those games.”

Rains completed 11 of 17 passes for 164 yards and two touchdowns. He also ran for 62 yards on 17 carries, including a 4-yard run for the Bucs’ first touchdown.

Smith, like Rains a sophomore, ran for 65 yards on 17 carries. He picked up up a lot of yardage after taking a hit.

Brotherton was impressed by his performance.

“We forget that kid’s still a sophomore,” he said. “He’s getting better. And he’s going to get bigger and get stronger. I thought these last two weeks really he’s made some good, tough runs. He’s been harder to tackle, broken more tackles. Just really excited about what he’s doing.”

“He made some big plays,” Brotherton said of East. “We converted a bunch of third downs, some big third-down completions that kept drives going. I thought that was key to the game. Go back and look at some of those third downs. You keep the drive going, then you score. You forget about the one the third down plays but those are huge.”

The game was Haughton’s third straight at home in the first round of the playoffs. The Bucs have won all three.

“It’s big for our program. It really is,” Brotherton said. “This group of seniors has gone through here having won a playoff game every year. I don’t know if this is accurate but somebody told me earlier after the game that there are only eight teams in 5A that have won a playoff game three years in a row.

“I’m excited about the mentality of the program. They expect to win. We’re going to go next week and nobody’s going to give us a chance. But we’re going to roll up with 70 players that are all going to expect to win that game. I think that’s half the battle sometimes when you’re dealing with high school kids.”