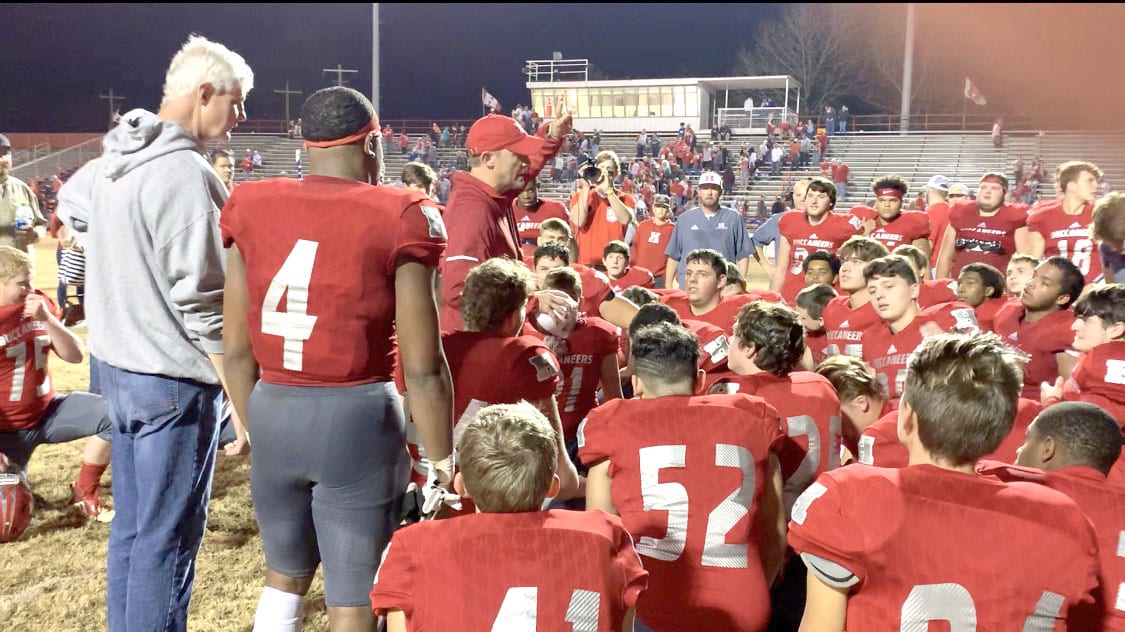 Way back in early September, after the Haughton Bucs routed Red River in their season opener, head coach Jason Brotherton let his team know he wasn’t happy with its somewhat sloppy performance.

In his postgame speech, he said going 7-3 and losing in the second round of the playoffs wasn’t going to cut it for the 2019 Buccaneers, who entered the season with high expectations.

Flash forward almost three months and, despite a few bumps in the road, it’s obvious the Bucs took their coach’s words to heart.

Haughton, the No. 11 seed, is one victory away from playing for the Class 5A state championship after defeating No. 19 Mandeville 34-14 in the quarterfinals before a large and enthusiastic crowd Friday night at Harold E. Harlan Stadium.

Haughton is in the semifinals for the first time since 1990 when the Bucs were in Class 3A. It will be the school’s first appearance in the 5A semifinals since moving up to the LHSAA’s highest class in 2011.

“We didn’t finish the season great,” Brotherton said. “We had some injuries and some things happened. But we talked about when the playoffs start to be able write our legacy over the next four or five weeks. And they put themselves in good company. I think 1990 was the last time we played in the final four and never in 5A. So we say we’re in the game to get to the game. And we’re excited about that.”

Haughton junior quarterback Peyton Stovall passed for two touchdowns and ran for two. He completed 11 of 18 passes for 188 yards.

“It’s awesome,” Stovall said of reaching the semifinals. “It’s been decades since we’ve been in the semifinals. It’s awesome to lead this team and play with this group of guys and play under these types of coaches. It’s a blessing and a dream come true. It’s something I’ll always remember for the rest of my life.

“But we have practice this week and we’re not done yet. We’re not stopping right here.”

CJ McWilliams caught four passes for 54 yards and rushed for 29 on four carries.

Matthew Whitten caught two passes for 55 yards, including a big 41-yard reception. Elijah Rochon had two catches for 44 yards and Tristan Sweeney had three for 35.

The Bucs got off to a fast start. Stovall’s 36-yard touchdown pass to McWilliams and Carter Jensen’s extra-point kick gave Haughton a 7-0 lead midway through the first quarter.

Later in the first quarter, Stovall scored on a 26-yard run and Haughton led 14-0.

The Bucs extended the lead to 20-0 early in the second quarter on a 1-yard run by Stovall.

Mandeville cut the lead to 20-7 on a 7-yard run by quarterback Devon Tott with 5:27 left in the half.

One of the game’s key sequences came in the final 1:02 of the half.

The Skippers went for it on fourth-and-1 from their 20. The Bucs stopped them. On the next play, Stovall connected with Rochon for a 21-yard touchdown,

That enabled Haughton to take a 27-7 lead into the locker room.

“We did want a quick start,” Brotherton said. “We got it. Our guys were ready to play. It was a good week of practice. It’s a tradition we play well here and that proved to be the case again tonight.”

Mandeville recovered an onside kick to start the second half. The Haughton defense came up big again, forcing at turnover on downs at the Bucs 34.

The Skippers cut the lead to 13 with 7 seconds left in the third quarter on a 5-yard pass from Tott to Will Sheppard.

“They’re a good, tough, physical, hard-nosed, well-coached team,” he said. “We talked about it all week. We thought we had a lot of advantages athletically, but they’re always in the right spot. They don’t give up a lot of big plays. That’s a testament to what they do and their staff.”

With Mandeville looking to further cut into Haughton’s lead, Dylan Turner made one of the game’s biggest plays. He intercepted a tipped pass and returned it 46 yards for a touchdown, giving the Bucs the 34-14 lead with 10:11 left to play.

“I saw the tipped ball and I saw I had the opportunity on it so I sprinted and grabbed it, caught a few blocks from my teammates and just took off,” Turner said.

Turner and the Haughton defense held Mandeville’s running attack in check throughout the game. Jack Henderson, who rushed for more than 100 yards in the first two playoff games, had 44 yards on 11 carries.

The Skippers finished with just 63 yards rushing, per Haughton stats. Tott completed 20 of 35 passes for 182 yards.

Mandeville had a final chance to make it a two-score game late in the fourth quarter, driving inside the Haughton 10. But the Bucs forced an incompletion on fourth down.

After driving to near midfield, Haughton punted. Jonathan Stephens then picked off a pass and the celebration began.