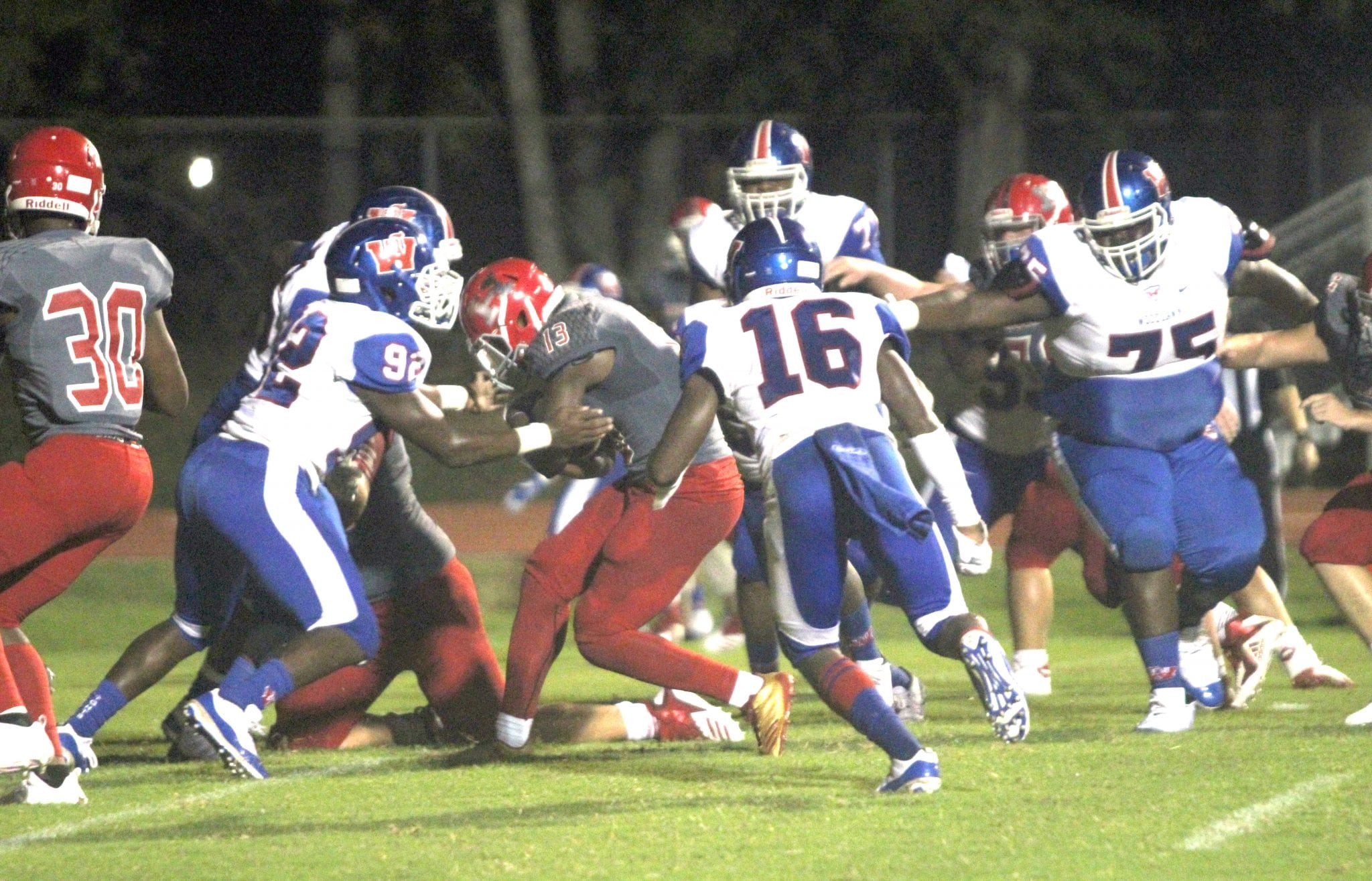 Haughton coach Jason Brotherton has yet to see his team play a complete game this season, but he has seen the Buccaneers win three straight.

Haughton defeated the Woodlawn Knights 43-34 in a shootout on a extremely humid Friday night at Harold E. Harlan Stadium.

The game started about 30 minutes late because of lightning in the area. A storm that rolled through at halftime resulted in a lengthy delay. The second half didn’t start until about 10:45 and the game ended around 11:30, about 4.5 hours after its scheduled start.

The Bucs avenged a 32-24 loss to the Knights last year.

While Brotherton is obviously happy to be 3-0, he wasn’t thrilled with the all aspects of the game.

“It was sloppy,” he said. “We played sloppy. That’s frustrating as a coach. But we’re playing a bunch of young kids who haven’t played much, and the weather wasn’t good on top of that.

“The conditions from the get-go last night were not ideal. You don’t want to make an excuse but they were pretty sloppy, too. It was just kind of a sloppy game all around.”

Even with the less-than-ideal conditions, Haughton’s offensive was virtually unstoppable. The Bucs rolled up 30 points in the first half. The problem was the Knights (1-2) matched them touchdown for touchdown and scored 27.

The difference was the Bucs were successful on two two-point conversions and two PATs by Carter Jensen. The Knights made three PATs but Haughton blocked one.

There were several momentum swings in the first half.

Woodlawn set up a touchdown with a fumble return as Haughton was threatening the score. After taking a 23-20 lead on Keyshawn Davis’ 53-yard run, the Bucs recovered the ensuing short kickoff when the Knights couldn’t control it. Tristan Sweeney scored from 1-yard out in the wildcat formation.

Woodlawn, though, regained the momentum at the end of half, scoring on the final play after an interception.

“We were at a point where we thought if we got one at the end of the half I thought we could put the game away, kind of bury them,” Brotherton said. “Instead we throw the pick and then they get one and it’s a three-point game, and then we were kicking off to them to start the third quarter so that just kind of gave them life. Sometimes you’ve got to be happy with what you’ve got. We got kind of greedy.”

Haughton began to slow the Knights’ big-play offense down in the second half, limiting them to just one TD.

“Offensive and defensively, really, the game was cleaner in the second half which is crazy,” Brotherton said. “After the storm and after the rain, everybody calmed down and the game was a lot cleaner on both sides of the ball I thought for both teams.”

Haughton rolled up 476 yards total offense. The Bucs had 285 yards rushing and 191 passing.

“He played great,” Brotherton said. “We got into a situation late in the game where we were up two scores and we kind of changed our gameplan to keep the clock moving. So we asked him to run the ball a lot. He took some big hits and kept bouncing back up. He took some shots and kept getting up and playing well.

“That was probably what I was most pleased with. You know what, our quarterback is young but he’s tough. Your team can rally around a guy at quarterback if they know he’s tough. I think he proved that last night.”

McWilliams finished with four catches for 121 yards, according to Haughton stats on digitalscout.com. He also scored both two-point conversions, the first on a run and the second on a pass from Stovall.

Davis went over 100 yards rushing for the third straight game, gaining 146 on 20 carries.