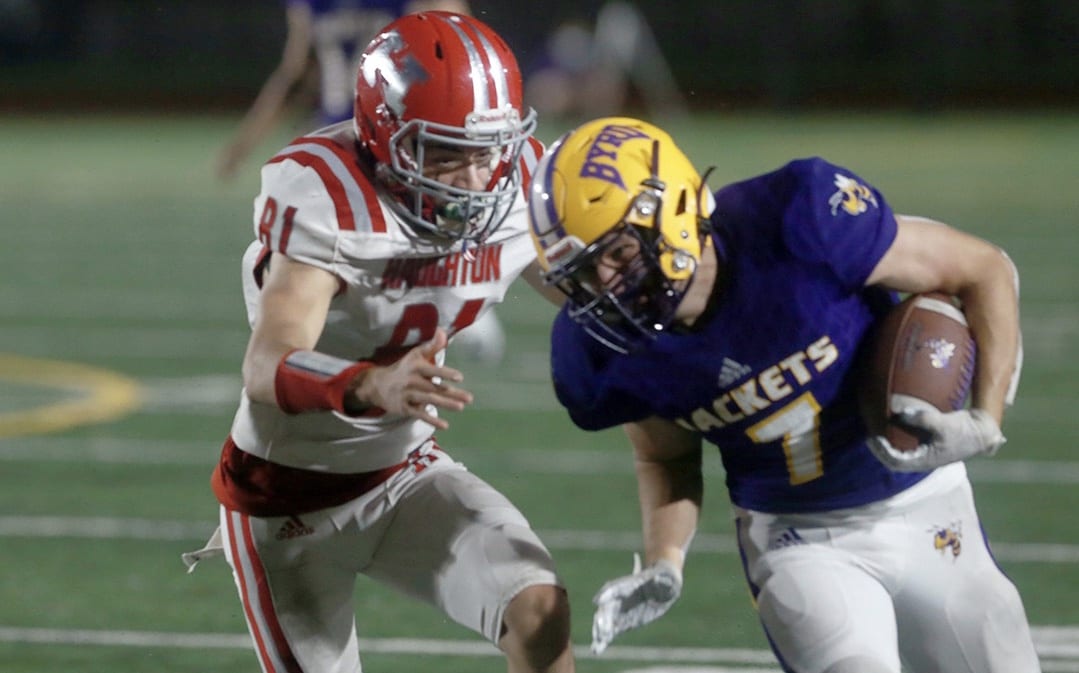 With only one returning starter at receiver and none in the backfield, Haughton head coach Jason Brotherton knew there might be some growing pains for his offense early in the season.

That was the case Thursday night in a 28-10 loss to the Byrd Yellow Jackets in a District 1-5A opener at Lee Hedges Stadium.

The Bucs let a couple of scoring opportunities slip away in the first half that might’ve made it a close game at the end.

Brotherton said inexperience in those types of situations against a quality opponent like Byrd, which has 25 seniors on its roster, was a factor.

“I think that’s definitely a big part of it,” he said. “Normally you get a scrimmage and a jamboree and two or three non-district games before you have to play somebody like Byrd. Especially this year with all the young kids we’ve got it’s tough.

“We hung in there. The kids fought, didn’t give up and battled. We had some chances to score, especially early in the game that could’ve changed the whole outcome of it. Couldn’t get it done.”

Haughton dropped to 1-1 overall. Byrd improved to 2-0. The Bucs had won three in a row in the series.

Haughton reached the Byrd 19 and 30 twice in the first half and came away with just three points, a 38-yard field goal by Carter Jensen that gave the Bucs a 3-0 lead.

Jensen’s field goal came after an incomplete pass on third-and-8.

The first trip to the 30 ended when the Jackets stopped a run for a 1-yard loss on fourth-and-1.

The drive started at the 9. Sophomore quarterback Colin Rains completed passes of 23 and 22 yards.

The second trip to the 30 ended on a interception in the end zone. Rains, scrambling to his left, completed a 43-yard pass to put the Bucs in scoring position.

Byrd’s Charles Grieder made the interception. Grieder had all three of Byrd’s interceptions. The Bucs stopped the Jackets after the other two.

While the Bucs had some success through the air, they got little going on the ground. Haughton finished with minus-3 yards thanks to team losses of 32.

“The inability to run the football makes it hard to score,” Brotherton said. “We hit some good plays but we couldn’t score on them.”

The Haughton defense had a hard time keeping Byrd’s veer-option offense in check after having some success early.

The Jackets rushed for 361 yards on 55 attempts, per Haughton stats. Byrd got 114 of those on two plays, a 66-yard run by William Berry for their first touchdown and a 48-yard run by Jason Little.

The Jackets did put the ball on the ground four times but it mostly bounced their way.

Byrd took control of the game late in the first half and early in the second. The Jackets took about four minutes to drive 80 yards. Berry swept left for the 11-yard TD with just 6 seconds left in the half, giving Byrd a 14-3 lead.

The Jackets then took the second half kickoff and drove for another touchdown.

Haughton reached the Byrd 22 in the third quarter. But an errant snap helped the Jackets hold.

The Bucs got on the board late in the fourth quarter on a 23-yard pass from Rains to Rochon.

Haughton visits Benton next Thursday. The Tigers (0-1) are scheduled to play Parkway on Friday night.

“You go back to the drawing board and try to clean some of that stuff up, get it fixed for next week,” Brotherton said.