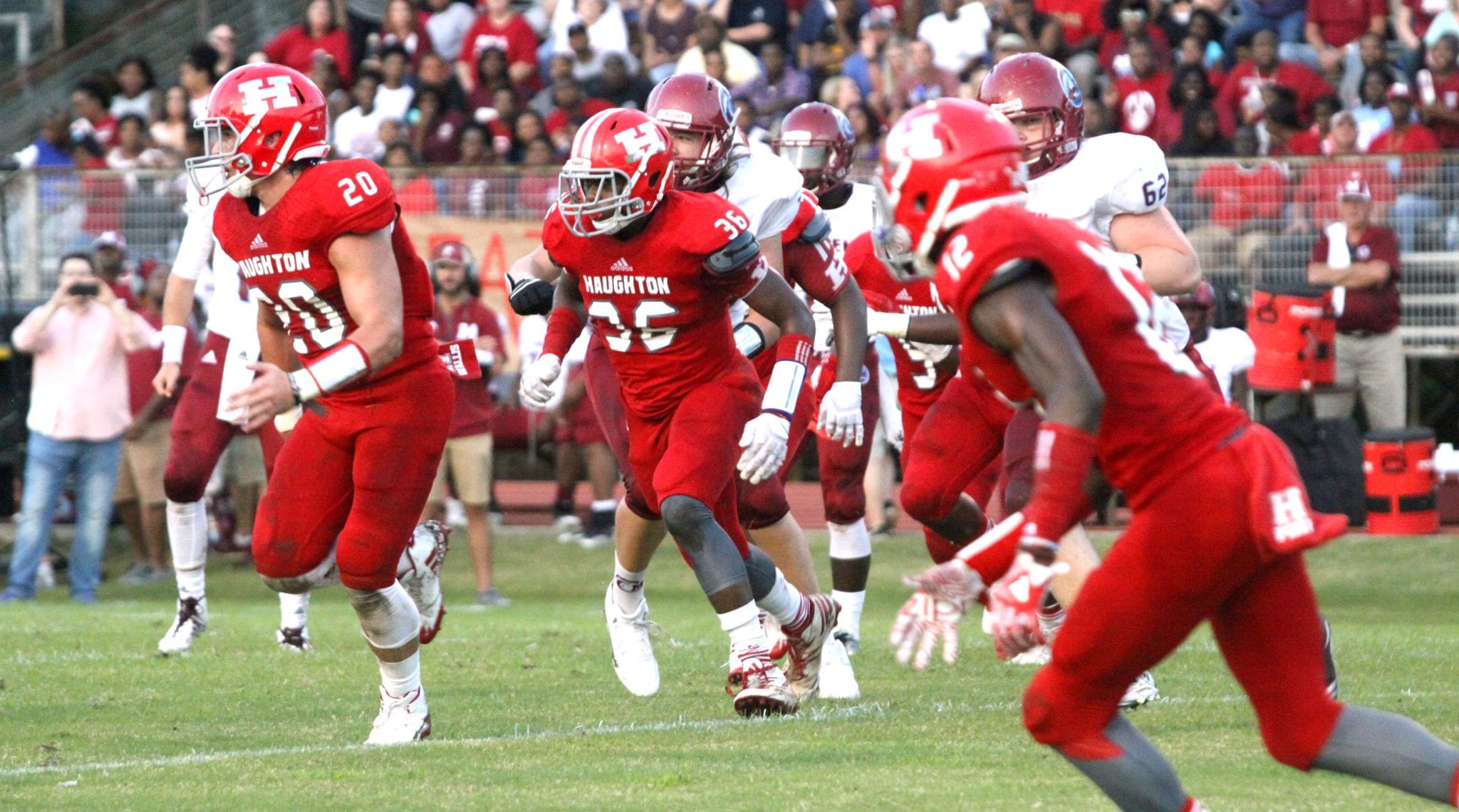 Things couldn’t have gone much better for senior Cameron Townsend in his debut as the Haughton Buccaneers’ quarterback.

Townsend completed all 12 of his pass attempts for 156 yards and three touchdowns in the Bucs’ 42-7 rout of the Minden Crimson Tide on Friday night at Harold E. Harlan Stadium.

“He played great,” Haughton coach Jason Brotherton said. “I think he was 11 of 11 at halftime.”

The Bucs had a commanding 36-7 lead at the half.

Haughton dominated in all phases of the game. The Bucs had 366 total yards, including 210 rushing, and held Minden to 152 (per Haughton stats).

“Our defense played great,” Brotherton said. “That’s what I was worried about. They’ve got (running back/receiver) Patrick Heard and he’s just as good as anybody around here. He never really got loose. I think he had one run of about 20 yards. Other than that we kept him penned up, strung everything outside sideline to sideline and did a good job tackling.”

Haughton speedster Lavonta Gipson rushed for 77 yards on 12 carries and scored on runs of nine and 29 yards. Townsend added 43 yards on five carries.

Emile Cola caught five passes for 76 yards, including touchdowns of 16 and 27 yards. Kynan Hayes caught a 30-yard touchdown pass and had another 18-yard reception.

Derion Phil went 19 yards for the Bucs’ lone touchdown of the second half.

“We blocked well up front,” Brotherton said. “Everything on offense was pretty good.”

Defensively, Hayes had four solo tackles to go with his TD catch, per Haughton stats. Riley Wallis had two solo tackles and three assists. Harrison Voigt had three solo tackles, including 2.5 for loss, and an assist.

Haughton was coming off a 19-0 loss to Airline in the jamboree, and Brotherton liked the improvement he saw. One thing he didn’t like, though, was the yellow flags thrown against his team. The Bucs were penalized 19 times for 134 yards. Brotherton said penalties have been an issue in the preseason scrimmages and jamboree.

“We got way too many penalties still,” he said. “Other than that we played pretty good.”

Haughton hosts Booker T. Washington on Friday. The Lions fell to Parkway 35-8 in their season opener.