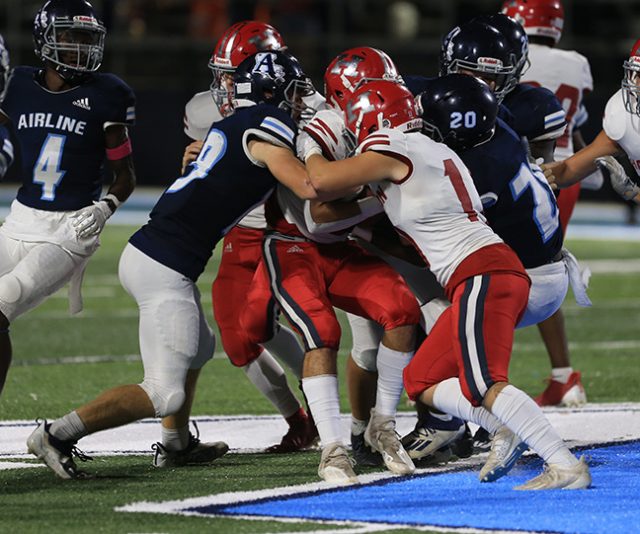 The Haughton Bucs held off the Airline Vikings 10-7 Friday night in a District 1-5A game at M.D. Ray Field at Airline Stadium.

The game wasn’t pretty especially for those who like offense, but it didn’t lack drama.

The Vikings then recovered an onside kick. Haughton sacked Taylor three straight times. But the Bucs were penalized for running onto the field prematurely thinking the game was over.. Airline got an untimed down.

“It was a Hail Mary jump ball,” Haughton Head Coach Jason Brotherton said. “They had a shot. It got pretty dicey there.”

But the ball fell incomplete and the Bucs could celebrate for real.

It was Haughton’s first victory over Airline since 2014 and Brotherton’s first win over the Vikings as a head coach after going 0-4.

“That was a really big win for our program,” Brotherton said. “From the adversity our kids have been through this year to not winning at the same rate we’ve become accustomed to. For it to be a hard-fought, close game, that makes it mean even more.”

Airline won by three points in 2018 and 2019 with PATs proving to be the difference.

“Every year they have found a way to pull it out in the end,” Brotherton said. “So to hang on and win a close game against those guys, that means a lot because our seniors have been through all those games and our coaches. That’s the first time I’ve ever beaten Airline as a head coach. Big win for all of us.

“Our defense played great. First time really in a while we created a bunch of turnovers, kept the ball away. Just a great effort all night.”

But the Bucs couldn’t capitalize until late thanks to a strong performance by the Airline defense.

Airline starting quarterback Ladarius Epps was injured in the second quarter after hitting his head hard on the turf. He did not return, but Meeks said his condition improved as the night went on,

“Hat’s off to Haughton,” Meeks said. “They had a great game plan. They shut the run down and gave us some problems and then they found a way to punch one in. We didn’t make enough plays to win. That’s kind of been the story of the year. Working to get better. Working to improve. We’ll get back to it on Monday and be able to play our best next Friday.”

Meeks was pleased with the way his team battled to the end.

“Ben stepped in there and moved us down the field without very much time left and then a great onside kick by Ben Jump and got it back and got a chance to throw it up. Very  low percentage there but very proud of the way we fought at the end. But we’ve got to play more consistently as a team and quit shooting ourselves in the foot. We are just not stringing together enough plays to win games.”