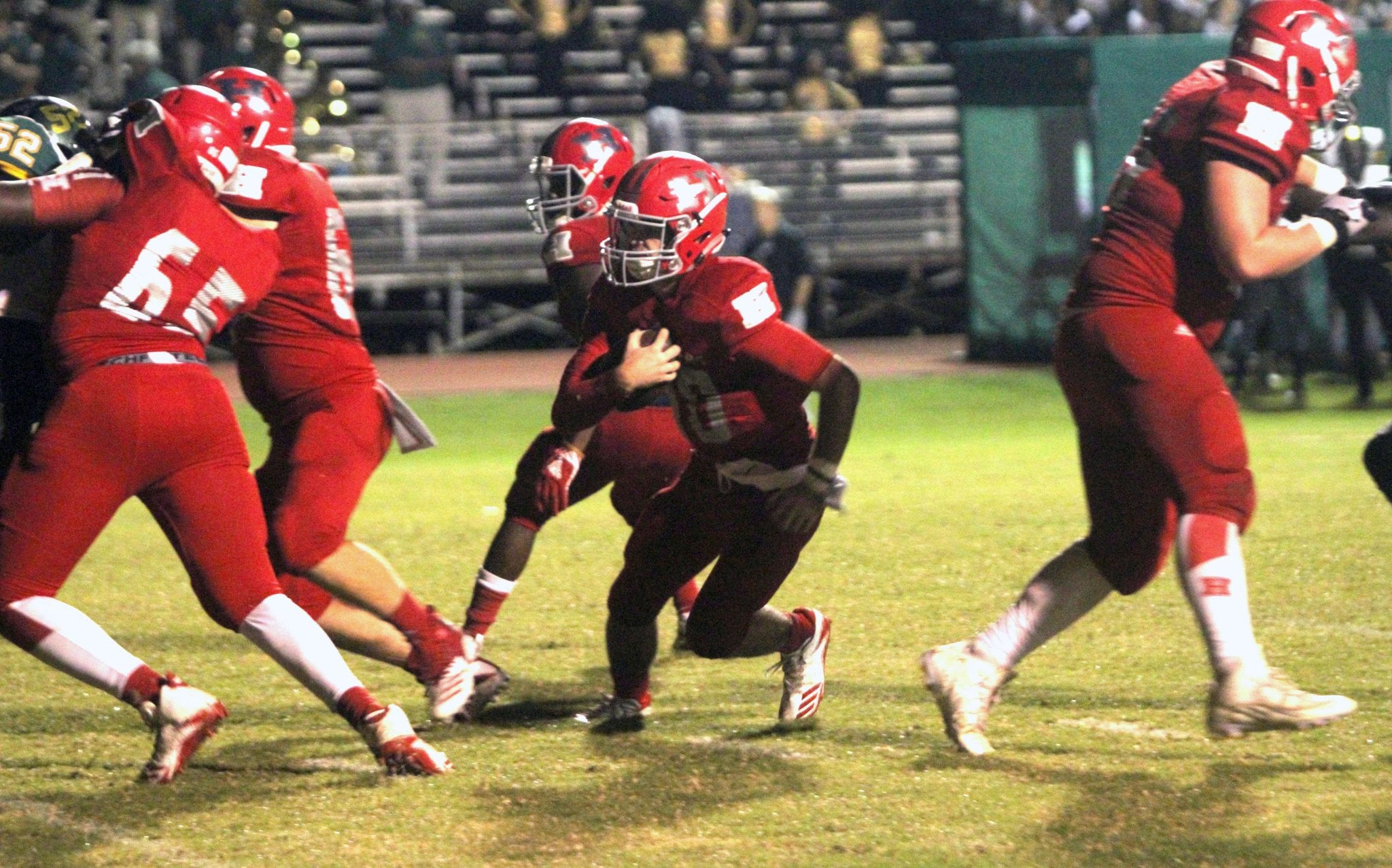 After building a four-touchdown lead through three quarters, the Haughton Buccaneers gave their fans a bit of a fright Thursday night at Harold E. Harlan Field in Haughton.

Captain Shreve scored three touchdowns in the fourth quarter to get within seven with 1:36 to play. But the Bucs recovered the onside kick as they had after the two previous TDs.

“In the end you try to get out of here and survive and advance to the next game,” Haughton coach Jason Brotherton said. “We were able to do that and so we’re excited with the win.”

The Haughton defense played well for three quarters before giving up some big plays, including two long runs, in the final quarter.

“It wasn’t fun at the end,” Brotherton said, praising Shreve’s talent and effort. “Both of those backs are good. The quarterback makes plays. They’re big up front. When they get that thing rolling it’s hard to stop it. I think we let off the gas a little bit and they got some momentum and you look up and you’re hanging on for dear life at that point.”

The Bucs did come up with one very big defensive play in the third quarter, stuffing a run on fourth-and-2.

Stovall had perhaps his best game in a remarkable sophomore season. He accounted for six touchdowns, passing for four and running for two. All but one of those came in the first half as the Bucs built a 35-14 lead.

For good measure, Stovall had a pooch punt downed at the Shreve 1 in the third quarter that set up Haughton’s final TD.

But with just over five minutes left in the game and the Bucs facing a third down inside the Shreve 10, Stovall was sacked by a Gator who burst through the line. He landed on his right (throwing) shoulder. In obvious pain, he walked off the field with a little assistance and later sat on the bench with an ice pack on his shoulder.

On Friday, Brotherton said Stovall was diagnosed with a Grade 2 AC joint sprain and will be going to rehab every day next week. The Bucs host Southwood Friday night.

Through the first six weeks of the season, Stovall led Bossier Parish in passing yardage and was second in rushing behind teammate Keyshawn Davis.

Davis led the Bucs on the ground with 75 yards on 22 carries. He also had two catches for 100 yards.

In the first half, Stovall connected with Matthew Whitten for touchdowns of four and 26 yards. He also ran 14 yards for a score and completed a 61-yard TD pass to Davis.

With just 13 seconds left in the half, he tossed a 27-yard TD pass to Tristan Sweeney (six catches, 89 yards). CJ McWilliams, who caught five passes for 41 yards, scored a two-point conversion on a run.

The touchdown came after Shreve scored to get within 13 with 2:17 left. After getting good field position following the kickoff, Brotherton had to decide between trying to put more points on the board or taking a two-touchdown lead to the locker room. The Bucs had scored on every possession to that point.

“We decided to try to score and get one in and it ended up being a big one,” he said.

Stovall’s final TD, a 7-yard run with 2:00 left in the third quarter, also turned out to be a big one.

The Bucs’ ability to recover the onside kicks in the fourth quarter was another key to the victory in a game that went from a rout to a nailbiter.