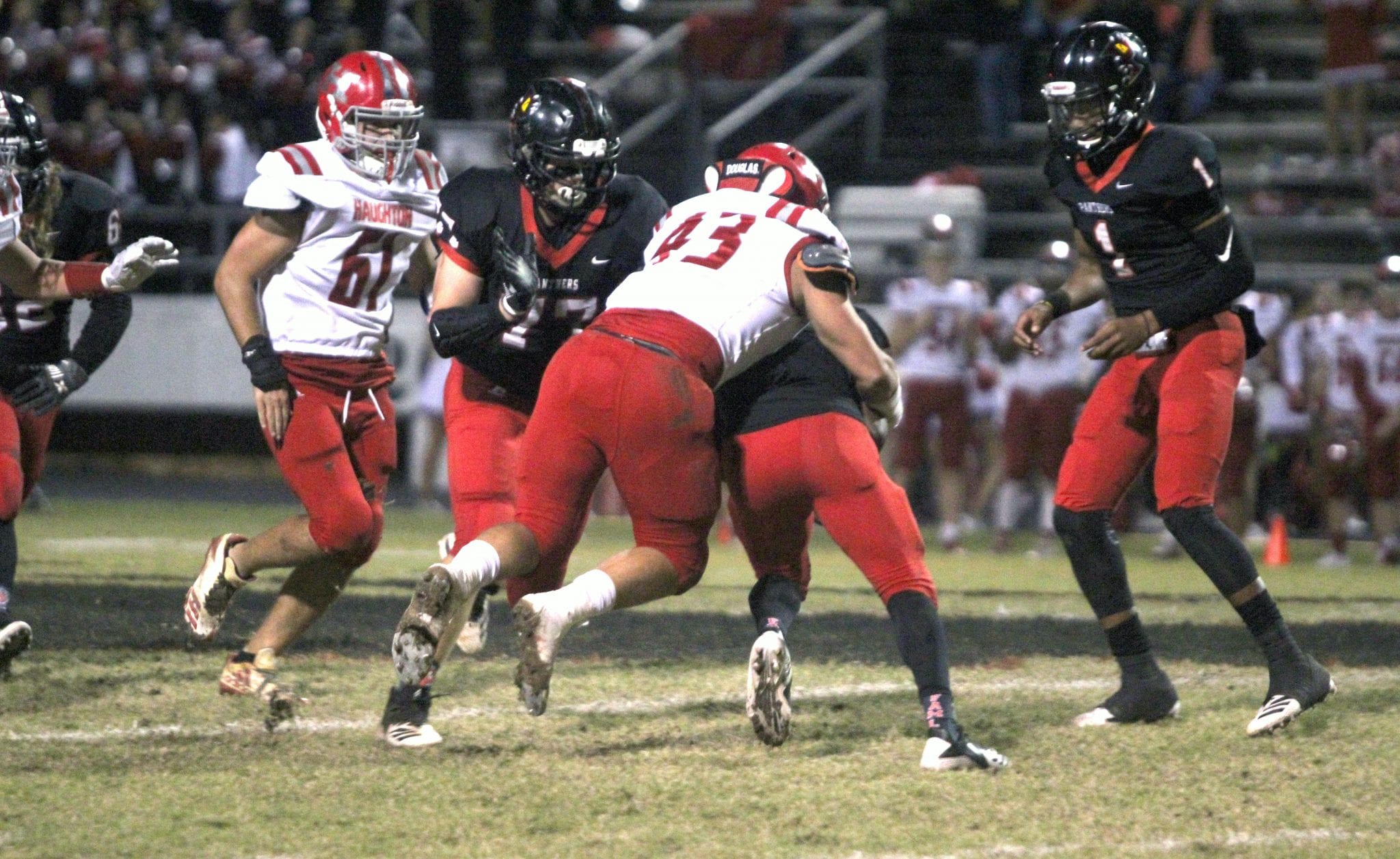 It was obvious with the way they celebrated that the Haughton Buccaneers’ didn’t consider their 26-23 victory over the Parkway Panthers on Friday night just another victory.

To say the least, the Bucs were fired up after defeating their parish rivals at Bobby Marlow Field at Preston Crownover Stadium.

“That’s a big game,” Haughton coach Jason Brotherton said. “That’s a big rivalry. They’re all friends with those guys. They do a great job. I always say when you get real excited it’s a compliment to them so that’s how I hope they take that. That’s a big win for us.”

That is how Parkway coach Neil May took it. He watched both teams leave everything on the field. It would be hard to imagine a game played with any more intensity this season.

“I’m just proud of our guys’ effort. Haughton’s a good football team. They’re 8-1 for a reason. We practiced hard all week long, prepared all week long. We had a great plan. We just came up short. The thing is I was so proud of our defense tonight. The effort those kids gave tonight has got to be recognized.”

In his postgame speech, it didn’t take long for Brotherton to get to one of the main reasons the Bucs came out on top.

One of Haughton’s touchdowns came on a kickoff return. Another was set up by a blocked punt. The Bucs also scored after a snap sailed over the Parkway punter’s head.

“He puts in the time,” he said. “He has them ready every week. We always play well on special teams. That was the difference. We got a blocked punt that led to a touchdown. We got a kick return for a touchdown. Just proud of the effort.”

May acknowledged that was a big difference in the game.

“We had some special teams breakdowns tonight,” he said.

Defenses dominated the first 19 minutes of the game. After Parkway turned back two scoring threats, the Panthers scored first on a 26-yard Luis Espino field goal. Quarterback Gabe Larry (36 yards) and running back Alijah Barnett (34) both had big runs in the drive.

But the lead was short-lived. Tristan Sweeney took the kickoff and raced down the Haughton sideline 91 yards for a touchdown. Carter Jensen’s PAT gave Haughton a 7-3 lead with 2:56 left in the half.

The blocked punt came on Parkway’s next possession. Dylan Turner blocked it and Khaylon Chapple recovered it at the Parkway 20.

But Parkway wasn’t done. On the final play of the half, Chase Turner went up high in the front of the end zone and hauled in a Larry pass for a 40-yard touchdown. The PAT failed and Haughton led 13-9 at the break.

A Kentravious Morris interception set up a Parkway touchdown in the third quarter. On fourth-and-10 from the Haughton 21, Larry hit Peyton Lewis for 11 yards. Larry made his way into the end zone on third-and-goal from the 1. Another failed PAT left the Panthers with a 15-13 lead.

Parkway extended the lead to 17-13 on a safety when McWilliams was called for intentional grounding while in the end zone.

Haughton’s Logan Wilkerson then made one of the biggest plays of the game for his team, intercepting a pass and returning it 29 yards to the Parkway 20.

A run followed by a penalty moved the ball to the 6. One second-and-goal from the 5, Sweeney lined up at quarterback and hit McWilliams for a touchdown. Jensen’s kick gave Haughton a 20-17 lead.

On Parkway’s ensuing possession, the snap over the punter’s head occurred, giving the Bucs a first down at the Panthers 18. One play later, McWilliams scored from a yard out. The PAT failed and Haughton led 26-17 with 2:00 left in the third quarter.

Parkway then drove 60 yards for a touchdown. A pass interference penalty and a 12-yard pass to Turner were among the key plays. Jamall Asberry made a tackle-breaking 16-yard run for the touchdown. After a penalty on Haughton, the Panthers went for two but a pass fell incomplete. Parkway trailed 23-20 with 11:39 left in the game.

The teams then traded punts on consecutive possessions before Parkway had its best chance to take the lead. A 44-yard pass from Larry to Turner put the ball at the Haughton 36.

After Asberry was tackled for a 4-yard loss, Larry threw two straight incompletions. On fourth-and-14, the Panthers tried a handoff to Turner, who was stopped for no gain with 2:50 to play.

Haughton sealed the victory on a 32-yard pass from McWilliams to Sweeney on third-and-12.

“We’ve played well on offense all year and we didn’t have it tonight,” Brotherton said. “Just other people stepped up. The defense played great. Team effort right there.”

Keyshawn Davis, Bossier Parish’s leading rusher, had eight carries for 46 yards, leaving him one yard short of 1,000 for the season.

“The quick passing game is something we tried to take advantage of tonight and Gabe did a good job with that,” May said. “Then we were able to beat them deep a couple of times. It was real tough to run the ball on them. They’ve got a great defensive front, great linebackers, big ol’ D linemen. We were able to run on them a little bit but it wasn’t enough.”

Morris and Ted Nelams were in on nine tackles each. Kyle Scott was in on eight. Kaybien Smallwood was in on six and Alexavier Mitchell five.