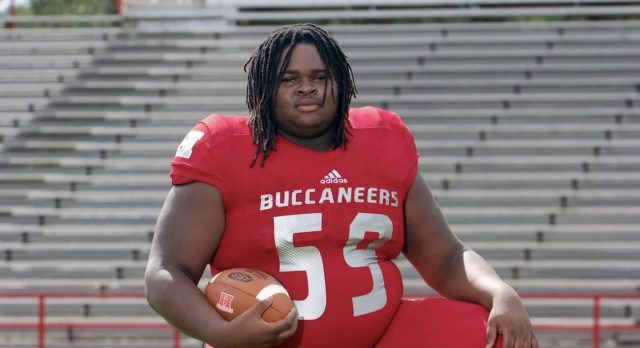 The Haughton Bucs defeated the Booker T. Washington Lions 40-0 Friday night at Harold E. Harlan Stadium. But that wasn’t what the night was about.

It was about honoring senior defensive lineman Christian Smith, who passed away suddenly Monday night.

Head Coach Jason Brotherton and the rest of his staff wore shirts with Smith’s jersey No. 59 on them. For the rest of the season, the 50-yard line will be the 59-yard line. The numbers 5 and 9 in Haughton red outlined in white are painted on each side of the 50-yard stripe on both sides of the field.

Before the Haughton players ran onto the field, two Bucs walked toward the bench area carrying a red banner emblazoned with 59.

After they came onto the field, the players formed a circle around the 59, knelt on one knee and bowed their heads. Their coaches stood behind them as Smith was honored and remembered with a moment of silence.

“It was pretty tough,” Haughton Head Coach Jason Brotherton said. “I told somebody awhile ago that kind of hit me like a ton of bricks. You go through the whole week and you’re trying to stay focused and dialed in. Everything is happening so fast. It’s all kind of a blur and then … that moment kind of hit hard. Not a lot of dry eyes in that circle for that moment of silence for sure.”

The game then began. Haughton took a 13-0 halftime lead and pulled away in the second half in front of a large homecoming crowd.

“It’s tough but you get through it and at least you win the game,” Brotherton said. “It would’ve made it worse to not win.”

Brotherton was particularly pleased with his defense for getting the shutout. The Bucs (2-1) held the Lions (1-2) to 166 total yards.

“We played really good on defense,” he said. “I think they got one big play that was a 20-yard plus play, but for the most part we limited the big plays and were able to eliminate the run game, put pressure on the quarterback and create a few turnovers. So the defense played great. They’re getting better every week so we’re excited about that.”

Haughton rolled up 364 yards total offense, including 310 on the ground.

“Offensively we were kind of sluggish,” Brotherton said. “I don’t know that we completed a lot of balls down the field, but we were able to run the ball and completed some stuff at the line of scrimmage. The quick game wasn’t bad, but we definitely got to get better in that department next week.

Junior running back Dexter Smith had his first 100-yard game of the season with 101 on 21 carries. He scored on runs of four and 19 yards.

Rains completed a 14-yard pass to Coleman Stafford for Haughton’s first TD of the second half.

Note: Services for Christian Smith will be Saturday, Sept. 25, at 11 a.m. in the Haughton gym. Visitation begins at 10.

A GoFundMe account has been set up to help Christian’s family with expenses. To view the GoFundMe, visit: https://gf.me/v/c/hqll/2fq7sx-help-with-funeral-expenses