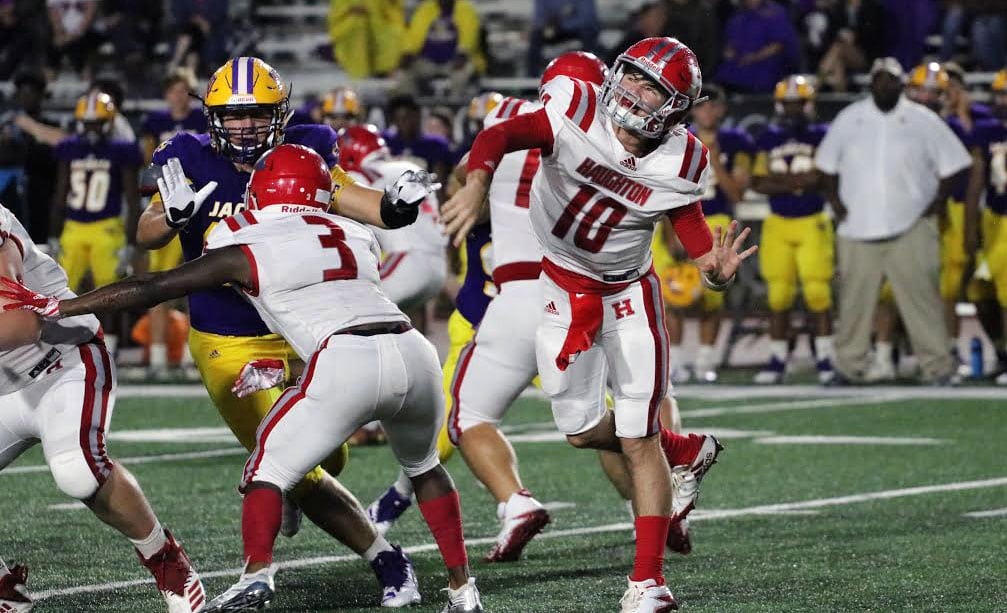 Last year, the Haughton Buccaneers defeated the Byrd Yellow Jackets for the first time since moving up to Class 5A in 2011.

Needless to say, that victory was a sweet one for head coach Jason Brotherton and the Bucs. Friday night’s 42-21 victory in a District 1-5A opener at Lee Hedges Stadium may have even been sweeter though.

Byrd came into the game 3-0. After a couple of so-so seasons, the Jackets look like they’re again playing the type of football that earned them a share of the District 1-5A title in 2015.

“This may have been our biggest road win since we’ve been in 5A,” said Brotherton, whose team improved to 4-0 overall. “It’s hard to get wins on the road in our league. Everybody’s good. When you get one on the road against a good team that means a lot.”

Brotherton got a congratulatory phone call from former longtime Haughton head coach Rodney Guin, now Calvary’s head coach, after the game. He said they discussed how difficult it had been for the Bucs to stay with Byrd in the past.

“It was like we never were going to beat those guys,” he said. “They just always physically beat us up bad. To get one last year was big. If you can get two in a row you feel like you’ve gotten your program to that level where you can compete with them. That’s exciting to us.”

Haughton scored 21 unanswered points after the game was tied at 21 in the third quarter.

The Bucs took the lead for good when Matthew Whitten ran 36 yards for a touchdown on fake punt with just 18 seconds left in the third quarter.

Keyshawn Davis sprinted 81 yards up the middle to give Haughton a two-touchdown lead with 8:06 left in the game. Peyton Stovall completed a 19-yard TD pass to Tristan Sweeney for an insurance touchdown with 2:29 left.

“You always talk about good teams win in the fourth quarter,” Brotherton said. “We were able to do that tonight so we were proud of that.”

While Byrd’s option offense controlled the ball much of the game, the Haughton offense came up with some big plays and the defense got key stops.

Stovall connected with CJ McWilliams on a 73-yard touchdown pass less than two minutes into the game. After Byrd tied it, Stovall hit Sweeney on a bubble screen and he turned it into a 63-yard TD as the first quarter was winding down to put the Bucs back on top 14-7. That’s how it stood at the half.

The Jackets tied it on a short run by Charlie Barham midway through the third quarter. The Bucs went back on top on Stovall’s 3-yard TD run with 5:00 left in the third.

Brotherton said one key was getting the two-touchdown lead on Davis’ long run in the fourth quarter.

“You get them out of what they like to do,” he said. “They started trying to throw the ball a little bit. That’s not really their game.”

In the first half, Haughton struggled in the running game. But the Bucs began having success in the second half.

“They switched from a four-man front to a three-man front to try to stop the pass,” Brotherton said. “Then we were able to line up and run it. Keyshawn Davis had some big runs and Peyton also. They took away what we were doing and that kind of changed our philosophy. We were able to run and throw it. If you can do that you usually come out on top.”

While Byrd put together some long drives, the Jackets didn’t get any huge plays, which was another key to the victory, Brotherton said.

“They got some 15-yard runs and maybe a 20 but we forced them to run a bunch of plays and take a long time, go on long drives,” he said. “When you can do that it’s hard for an offense like that to sustain 15- and 16-play drives. Then if you ever get them where they’re having to throw it, they definitely don’t like doing that. That was a key.

“We knew if we could just tackle and not give them any big plays we’d have a chance to slow them down. I don’t know if you ever stop that. Just kind of slow them down enough to hang in there and take the punch and we did. I’m proud of our kids. We played well.”

Davis rushed for more than 100 yards for the fourth straight week, gaining 175 on 16 carries. Sweeney had his best game of the season, catching four passes for 119 yards. McWilliams continued his outstanding season, making four grabs for 77 yards. He also had a 47-yard kickoff return.

Stovall, who has been efficient all season, completed eight of 12 passes for 196 yards with no interceptions. He also rushed for 56 yards on nine carries.

Haughton hosts Evangel Christian on Friday. The Eagles (1-3) opened district play with a 56-20 home victory over Parkway on Friday.

Evangel has won or shared the district title every season since moving up in 2015. The Eagles have dominated the last two seasons.

“It doesn’t get any easier, but we’re going to enjoy this one,” Brotherton said.