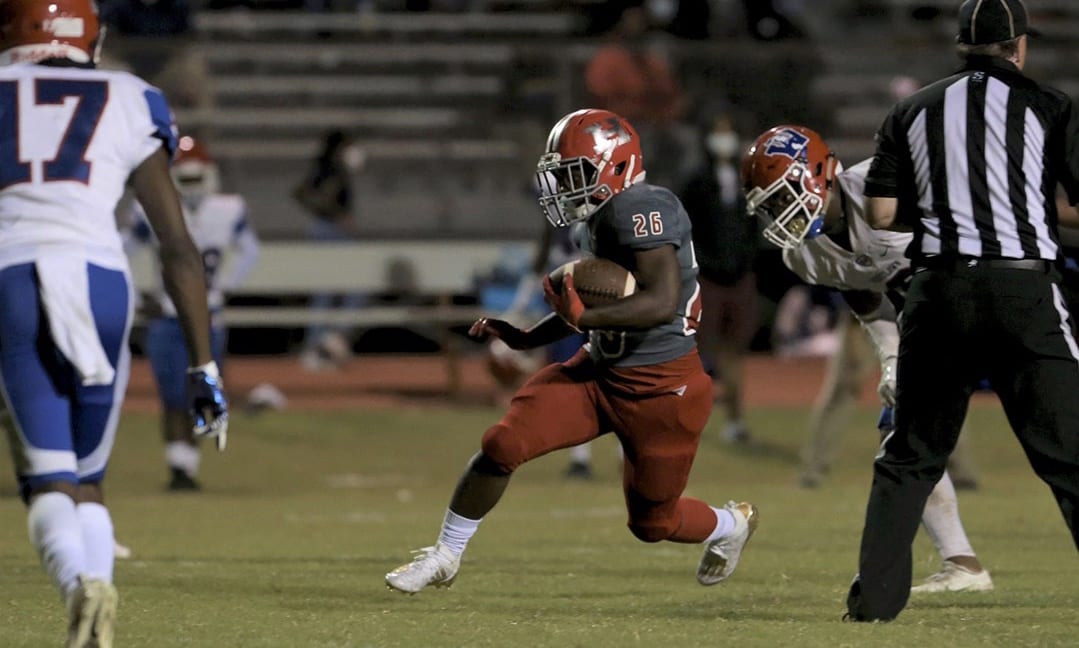 Down by 13 in the second quarter, the Haughton Buccaneers scored 38 unanswered points en route to a 51-26 victory over the Woodlawn Knights in a season opener Friday night at Harold E. Harlan Stadium.

“It wasn’t pretty but we’ll take it,” Haughton head coach Jason Brotherton said. “I told the kids we’re not going to apologize. We’re going to take them any way we can get them.”

Woodlawn didn’t look like a team coming off a one-win season early in the game. The Knights put together a couple of nice touchdown drives.

Mistakes in the kicking game cost the Bucs in the second quarter and allowed Woodlawn to take the 13-point lead.

But Haughton, which had little trouble moving the ball from the start, dominated the rest of the game. The Bucs scored with a minute left in the half to get within seven and then outscored the Knights 24-0 in the third quarter.

“We didn’t play bad,” Brotherton said. “We were bad on special teams. They got two special teams touchdowns. Take those out of it the game wasn’t even close.

“We missed two extra points. It was a special teams disaster for us. We’ve got to get a lot better in that phase of the game. We’ll get to work on that this week and fix a lot of those problems I hope.”

Haughton running back Dexter Smith had an impressive debut, rushing for 162 yards on 22 carries, an average of 7.4 yards per carry. He scored on a 13-yard run.

Sophomore quarterback Colin Rains also turned in an outstanding performance. He completed 10 of 16 passes for 128 yards and two touchdowns with no interceptions.

Rains also rushed for 104 yards on 10 carries. He scored the Bucs’ first TD on a 20-yard run and two others on 1-yard sneaks.

His touchdown passes went to Coleman Stafford, who made a nice run after the catch, for 48 yards and to Elijah Rochon for five.

“He played well,” Brotherton said of Rains. “Probably got more out of him in the run game than we expected to so that was a nice surprise. He’s commanding the offense well and playing well, doing the things we’re asking him to do, getting the team in and out of the huddle, all the small things a quarterback has to do that people don’t see or don’t know about. He’s doing a good job taking care of that stuff.”

Rochon, the only receiver who saw significant playing time last season, had three catches for 54 yards.

Carter Jensen kicked a 32-yard field goal, and the defense got a safety late in the game with a tackle in the end zone.

The Bucs spent much of the first half chasing Woodlawn’s scrambling quarterback. The Knights put the ball in the air 38 times. They completed 20 for 183 yards.

“He made some plays,” Brotherton said. “He’s a good athlete. We chased him all over the doggone field. He’d make a play. They’d get open when he scrambled. They’re going to win some games this year I believe.”

Haughton opens District 1-5A play Thursday against Byrd at Lee Hedges Stadium. The Yellow Jackets opened with a 35-27 victory over Calvary Baptist.