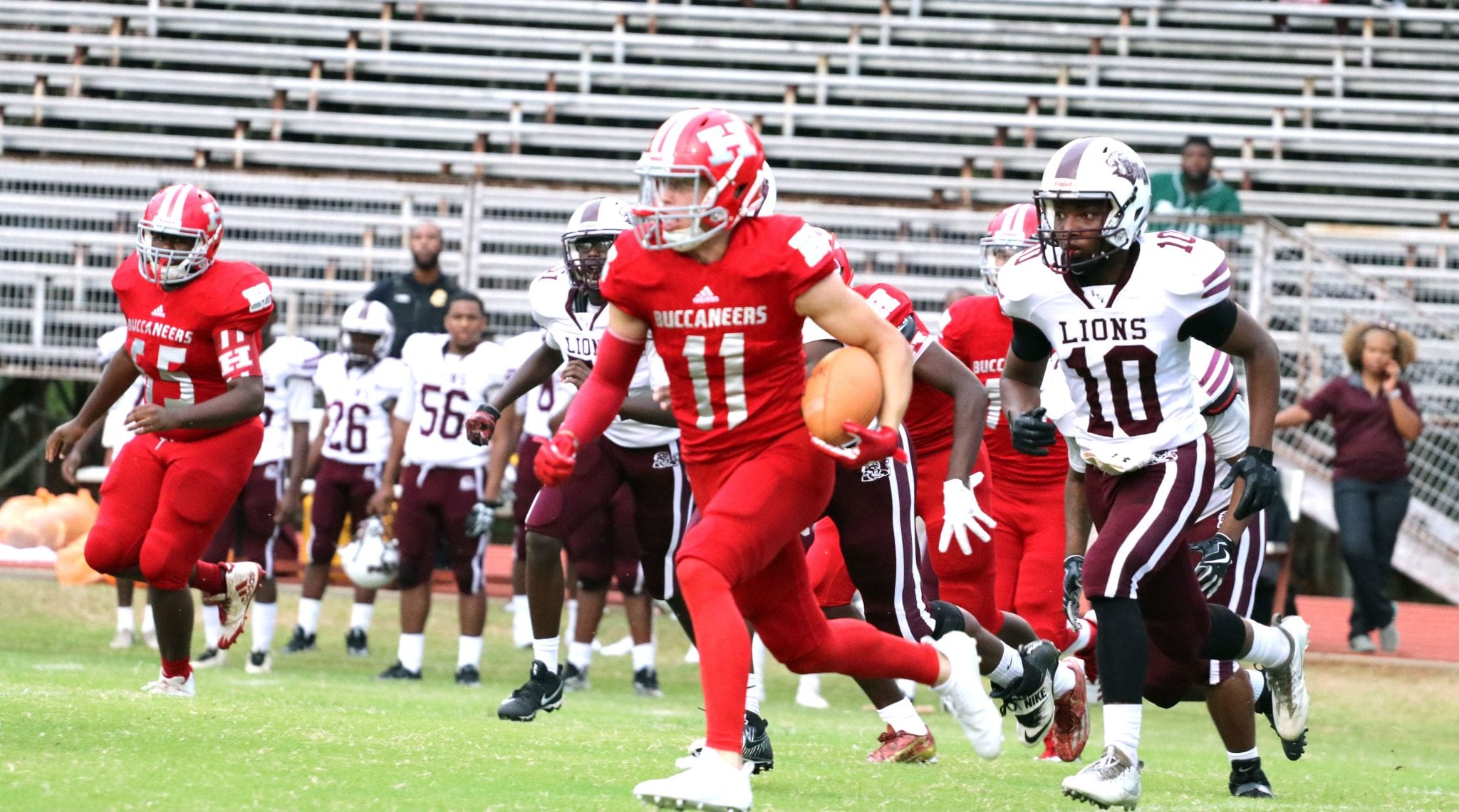 Sophomore quarterback Peyton Stovall passed for a pair of touchdowns to junior CJ McWilliams and ran for one as the Haughton Buccaneers rolled past the Booker T. Washington Lions 40-14 Friday night at Harold E. Harlan Field.

The Bucs improved to 2-0 for the second straight year. The Lions fell to 0-2.

Haughton played an almost flawless game offensively. The Bucs didn’t punt or have a turnover. They rolled up a whopping 595 total yards, including 407 on the ground.

“We played well offensively,” Haughton coach Jason Brotherton said. “Our quarterback threw the ball well, and we caught it. The running backs had good games. I was very pleased the offense. We were very sharp.”

Junior Keyshawn Davis rushed for more than 100 yards for the second week in a row. He gained 120 on just 12 carries and scored on a 9-yard run to give the Bucs a 34-6 lead in the third quarter.

Stovall completed eight of nine passes for 176 yards. His TD passes to McWilliams covered 14 and 42 yards. He ran 20 yards for a TD in the final minute of the first half to put Haughton ahead 22-6. Stovall finished with 38 yards rushing on just two carries.

Carter Jensen started the scoring for Haughton with a 25-yard field goal in the first quarter. Sean Hardison had a 7-yard TD run in the second quarter.

Derion Phil scored the Bucs’ final TD from 2 yards out late in the third quarter.

BTW kept the game relatively close in the first half. The Lions cut the Haughton lead to 10-6 on a 72-yard TD pass late in the first quarter. They also had a long drive that ate up much of the second quarter, but the Bucs kept them out of the end zone.

“That kind of slowed us down a little bit and they had a good plan,” Brotherton said. “They kept the clock running and did the things they had to do.”

The Bucs pretty much shut down the Lions in the second half, though. BTW’s lone TD came on a 65-yard run in the fourth quarter.

Logan Wilkerson led the defense with six solo tackles and one assist, according to Haughton stats. Matthew White had four tackles and three assists. Trenton Seets had two solos and four assists. Dylan Turner had three solos and two assists. Jacob Stephens was in on six tackles, including five assists.