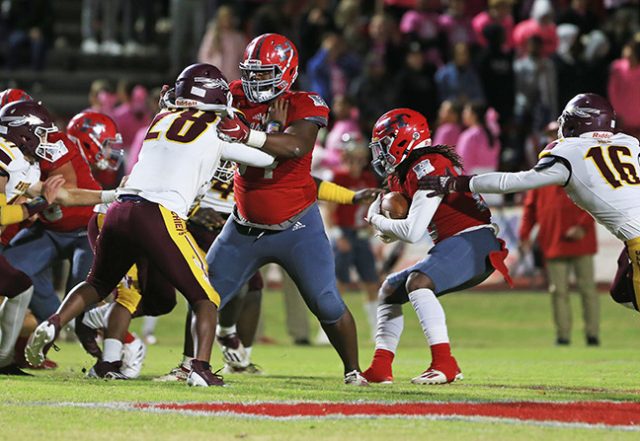 But Brotherton also knew the Bucs had a good shot at knocking the Chiefs out of a share of the District 1-5A lead.

Haughton did just that, winning 35-7. While it may not be a huge shock Haughton won, the Bucs’ level of dominance was.

“We felt good about it,” Brotherton said. “We thought we matched up pretty well with them and we had a great week of practice. That’s one of the first games all year I feel like where we’ve caught some breaks early in the game. We were able to take advantage of that, kind of got the momentum at that point.”

“That’s when it’s fun,” he said. “That’s what we just said in the office. It’s fun to win a game when nobody expects you to win it.”

Haughton improved to 5-4 overall and 3-3 in district. More importantly, the Bucs jumped to No. 21 in the Class 5A rankings, according to GeauxPreps.com, heading into Friday’s regular-season finale against Parkway (5-4, 3-3) at Bobby Marlow Field at Preston Crownover Stadium.

“That’s a big win.” Brotherton said. “They had seven wins there. We feel like that for sure gets us in the playoffs.”

Natchitoches Central dropped to 7-2 and 4-2. The Chiefs dropped to No. 17 in the power rankings.

“The defense played great,” Brotherton said. “Their quarterback (Brian Young, shoulder injury) didn’t play. That probably hurt them a little bit because he’s a really good player. I’m sure that probably took a little of their fight out of them coming into it.”

But where the Bucs really dominated was on offense.

“We possessed the ball and were able to line up and just run it and churn out first downs,” Brotherton said. “Just kind of kept the ball away from them as it was.”

“A lot of big, tough physical runs throughout the game,” Brotherton said.

Quarterback Colin Rains also scored rushing touchdowns of 1 and 19 yards. He completed nine of 16 passes for 83 yards, including a 6-yard touchdown to Tyson Kizzia that put Haughton up 21-0 in the second quarter.

Natchitoches Central’s Caylin Demars continued his outstanding season, rushing for 161 yards on 26 carries. But the rest of the Chiefs’ offense accounted for only 30, per Haughton stats.