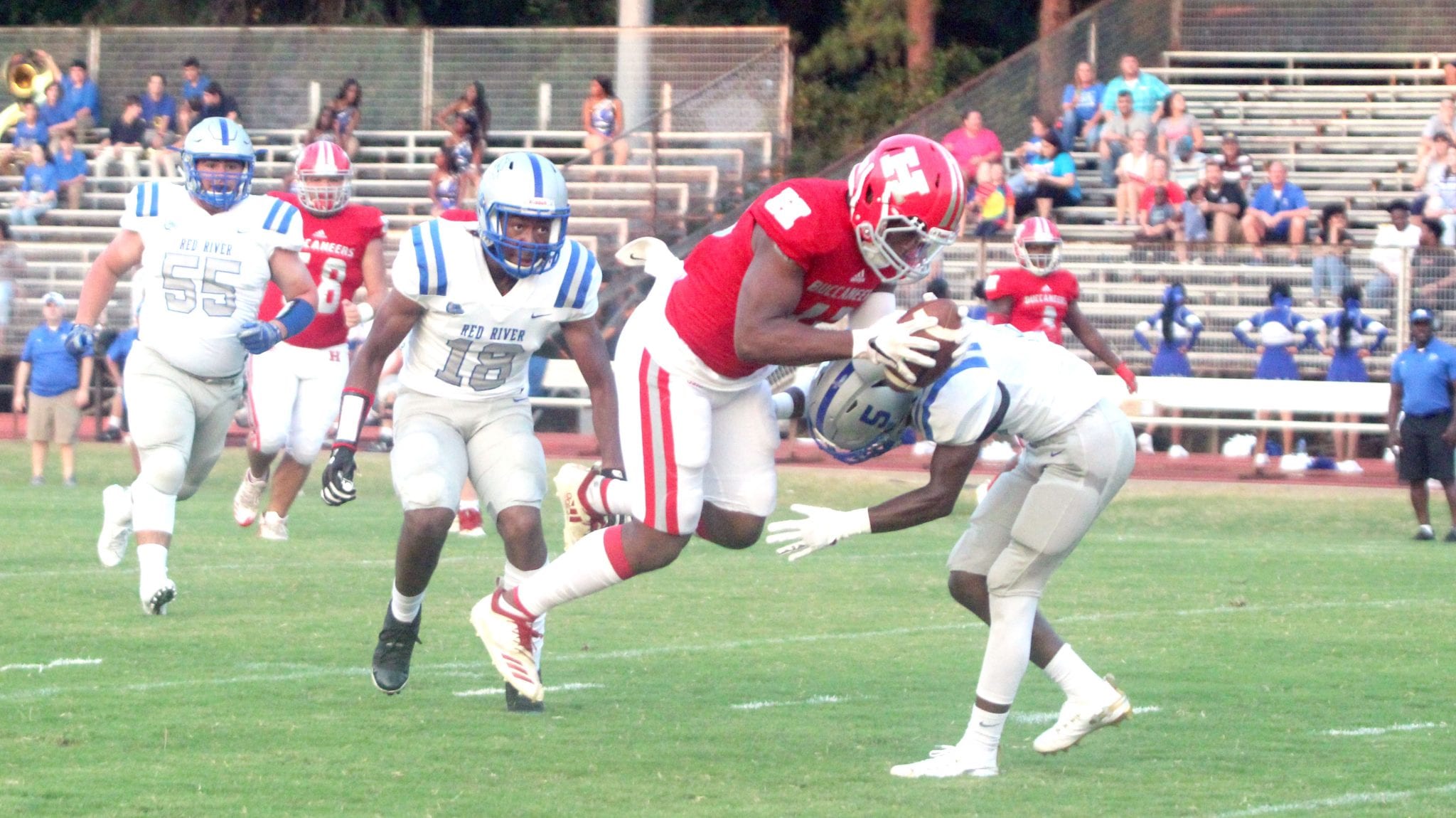 The Haughton Buccaneers came into Friday’s season opener against the Red River Bulldogs as the heavy favorites and they didn’t disappoint.

Haughton rolled to a 25-0 halftime lead en route to a 46-7 victory at Harold E. Harlan Stadium.

“Get a win and we got out healthy,” he said.

Brotherton said Stovall’s status for this Friday’s showdown against East Ascension, ranked No. 6 in the LSWA Class 5A preseason poll, is “wait and see.”

East Ascension knocked off No. 5 Zachary 40-31 in its season opener.

As he did the last three games of the 2018 regular season and two playoff games when Stovall was injured, senior CJ McWilliams stepped in at quarterback.

McWilliams was the Offensive MVP on the All-Parish team and he showed why. A Louisiana Tech commit, he ran for one touchdown and passed for two. He and the rest of the Bucs starters gave way to substitutes about halfway through the third quarter.

McWilliams completed eight of 14 passes for 107 yards. He also rushed for 36 yards on five carries.

McWilliams dashed 18 yards for Haughton’s first touchdown after the Bucs took advantage of a penalty against Red River on fourth and long.

Tristan Sweeney then hauled in a 45-yard TD pass, working hard to get into the end zone. Carter Jensen’s PAT made it 13-0 with 1:39 left in the first quarter.

The Bucs took over at the Red River 2 after a bad punt snap. But the Bulldogs made a good defensive stand and Jensen booted a 19-yard field goal to make it 16-0 early in the second quarter.

Keyshawn Davis, who rushed for 74 yards on 14 carries, scored his first TD of the season on a 8-yard run.

Khaylon Chapple’s third sack of the first half set up a safety with Leshaun Davis making the tackle in the end zone.

Haughton scored on its first drive of the second half with McWilliams hitting Sweeney for a 20-yard score.

The Bucs’ second TD in the second half came on a pass by Jensen. After a snap went awry, he picked up the ball and threw it toward Matthew Whitten, who made the catch and completed the 9-yard scoring play.

Haughton added a final touchdown on a fumble recovery by Zach Haley.

Needless to say, Brotherton liked what he saw from his defense.

“They tackled well,” he said. “We got good penetration, excellent pass rush every time they threw a pass. Just kept the pressure on them. It was 11 people flying to the ball every play.

“They had good enough athletes that they could break a long touchdown at any point. We kept that from happening. One or two long touchdowns early in the game then it’s a different game. Defense got on ‘em early and did a great job.”

Brotherton said there are still a few issues to iron out with the offense. In addition to failing to score a touchdown from the 2, Haughton lost two fumbles, including one inside the 10.

“We’ve got a lot of work to do offensively,” he said. “The talent’s there. That’s what’s so frustrating. You know how good it could be. We’ve got playmakers everywhere. We’re just not real sharp right now. We’ve got to get that fixed before Friday night.”