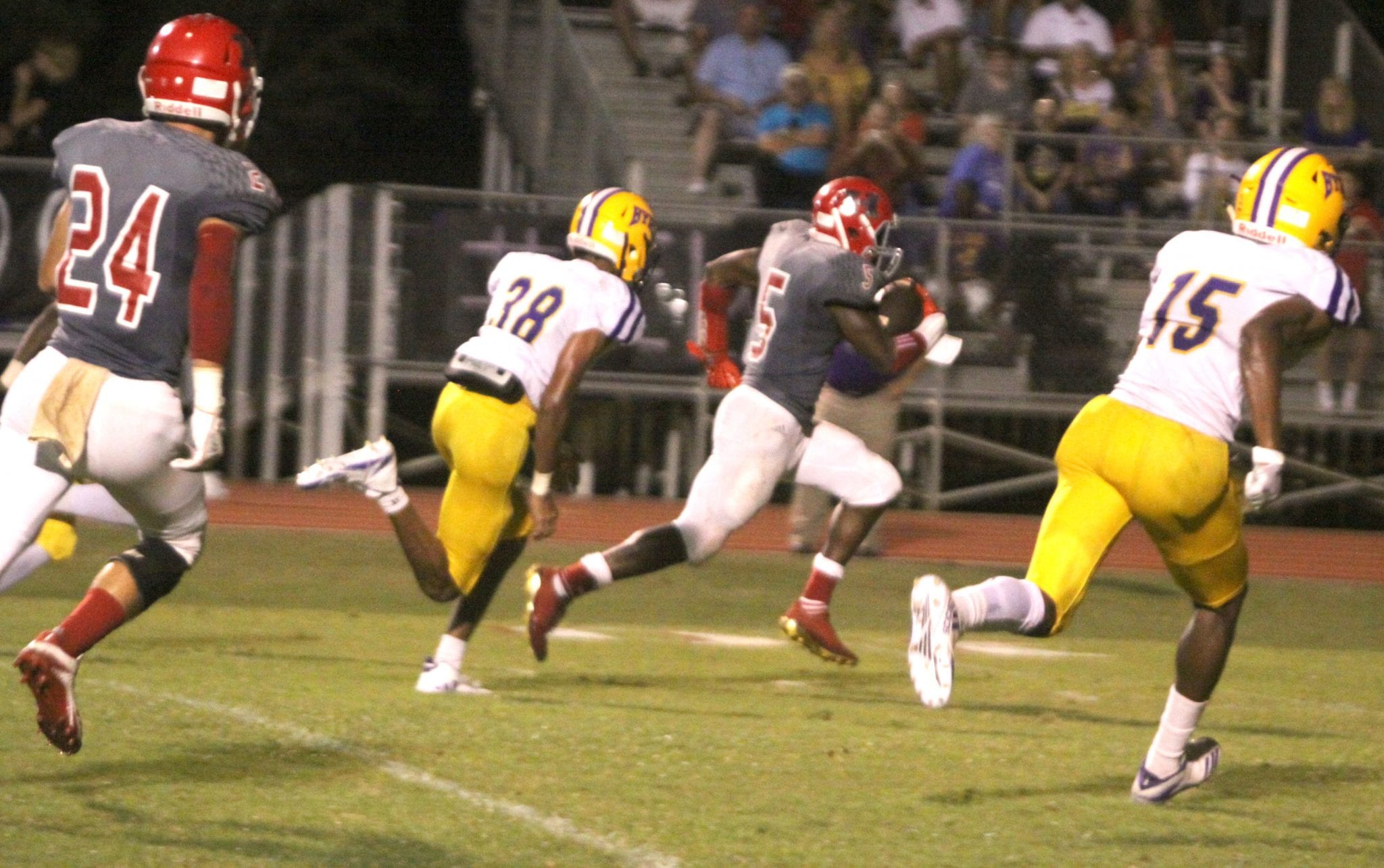 With his team leading by 21 at the half Friday night, Haughton coach Jason Brotherton knew the Byrd Yellow Jackets wouldn’t go down quietly.

The Jackets didn’t. Byrd scored two touchdowns to cut a 28-7 Bucs’ lead to 28-19 with still almost a full quarter left to play.

Brotherton had seen it before. Last season, his first as a head coach, Haughton played outstanding football in the first half of several district games, including Byrd, only to have things go south in the second half.

So how did the Bucs respond this time? They stopped a two-point conversion attempt first. Then, after a Byrd onside kick failed to go 10 yards, Lavonta Gipson went 48 yards for a touchdown.

Haughton went on to win the District 1-5A opener 44-19 at Harold E. Harlan Stadium.

“That was probably what I was most proud of,” Brotherton said of the Bucs’ second-half response. “We were prepared, and when they made the run to stick with it and keep playing well that was something we didn’t do last year, so that was good.”

It was Haughton’s first win over Byrd since moving up from District 1-4A in 2011 and first period since 1984. Haughton and Byrd played only four previous times before the Bucs moved up to Class 5A.

“That is a big one for us,” Brotherton said. “It’s been a long time trying to beat those guys.

“Good team win. Good win for our program. Those are the teams we’re trying to beat. We want to get to their level so we hope tonight was a step in that direction.”

Haughton, coming off a tough 32-24 loss to Woodlawn, improved to 3-1 overall. Byrd dropped to 2-2 with its second straight loss.

Gipson was just one of Haughton’s heroes. Behind some tremendous blocking by the offensive line, he rushed for 175 yards on 23 carries and scored three other TDs on runs of 1, 31 and 2 yard.

Cameron Townsend completed 12 of 13 passes for 101 yards and two touchdowns, all in the first half.

“He’s been sharp all year and kind of continued along with that,” Brotherton said. “He’s exceeded expectations and we’re proud of what he’s done.”

Townsend’s TD passes went to Tristan Sweeney (13 yards) and tight end Matthew Whitten (9 yards). The latter came after a penalty and 3-yard loss pushed the Bucs back after a first-and-goal at the 1.

Korbin Schmidt closed Haughton’s scoring with a 37-yard field goal late in the game. He also was five-for-five on extra-point attempts.

The Haughton defense forced four turnovers, including interceptions by D.J. Monroe and Greg Phil in the second half. The Bucs turned both of their first-half fumble recoveries into touchdowns.

“We played well on defense,” Brotherton said. “We created some turnovers and really didn’t give up any big plays. They had a chance for a couple of big plays. They dropped some big passes that could’ve hurt us, but we just kind of stuck with it and didn’t give up the big play and made them drive the length of the field.”

Jalob Walker had five solo tackles and one assist, per Haughton stats. Khaylon Chapple had three solos and four assists.

Riley Wallis had one solo and seven assists. Harrison Voigt had three solos and three assists. Gavin Roe and Trenton Seets were both in on six tackles.

Whitten was in on five tackles and Blake Nyswarner four.

Haughton continues District 1-5A play at defending champion Evangel Christian on Friday. The Eagles (2-1) won their district opener 52-0 at Parkway on Friday night.

Brotherton, though, wasn’t thinking about Evangel after Friday’s win.

“We’re going to enjoy this one tonight,” he said.