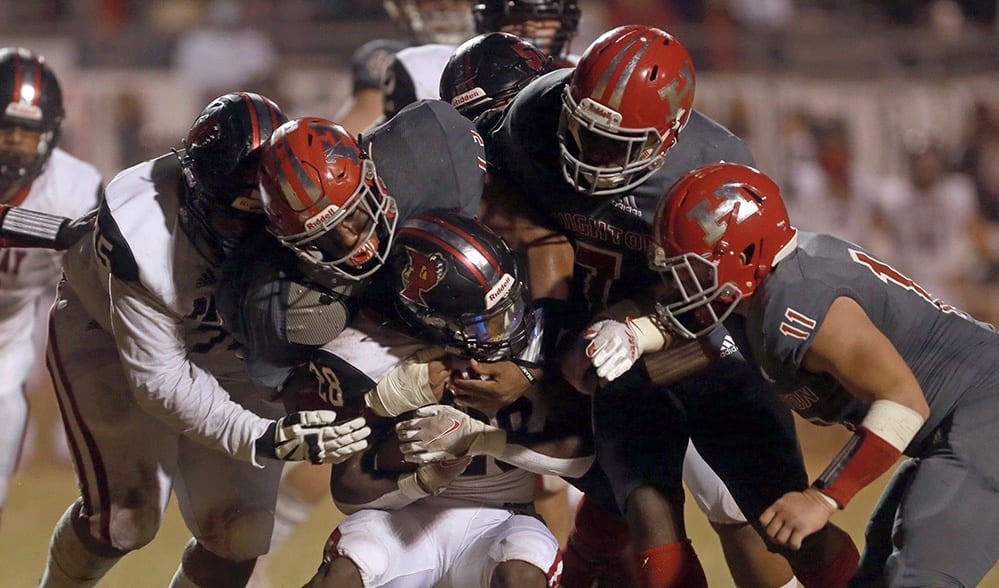 By Dylan Brosette, Special to The Press-Tribune

Two touchdown runs from Haughton sophomore quarterback Colin Rains and timely defensive stops overcame a strong offensive effort from visiting Parkway, as the now 7-1 Bucs turn their attention to the first round of the playoffs this coming Friday following a 33-13 win Friday night at Harold E. Harlan Field.

In a bout billed as the “Brotherton Bowl,” pitting Haughton head man Jason Brotherton against younger brother and Panther head coach Coy Brotherton, it was not offense that decided the affair, rather missed opportunities for Parkway, while the Bucs took advantage of some timely miscues.

The Panthers let two sure touchdowns slip through their fingers, while the Bucs’ defense forced one interception and a fumble off Parkway junior quarterback Cannon Link, also sacking Link once.

Haughton rolled up only 255 yards of total offense for the affair against Parkway’s 387 but was able to punch the ball in near the goal line all night.

“That’s the way we’ve been all year,” said Haughton’s Brotherton. “We’re not super explosive on offense. We know that. But we’re going to be great on special teams, be great on defense. We’re going to be opportunistic and score when we get the chance. That’s been our formula all year long. It’s not flashy. It’s not fancy. But we’ve ridden that to seven wins now.”

It was Parkway who opened the scoring early, as sophomore running back Jaylan White scored the first of his two touchdowns on the ground at the 5:46 mark of the first quarter, converting a Rains interception on the Bucs’ second passing attempt of their opening possession into a TD from 3 yards out and a 7-0 lead.

White would finish as the game’s leading rusher, tallying 125 yards and two scores on 24 carries.

That would be the last time the Panthers would taste the end zone until late in the fourth quarter, as Haughton fed the Panthers a steady diet of sophomore running back Dexter Smith for most of the second and third quarters as he totaled 60 first-half yards.

The Bucs built a 23-7 halftime lead on a 6-yard Rains run late in the first quarter, and back-to-back scoring drives in the second quarter, capped with short plunges by both Rains and Smith.

Senior kicker Carter Jensen also got on the act, nailing a 40-yard field goal at the halftime horn.

“We knew they were going to be good on defense; passing wasn’t there so we had to go to the run,” Rains said of the Panther defense. “They couldn’t really stop our run, so we kept pounding it and it worked out for us.”

The Panthers’ woes continued late into the affair, when midway through the third Haughton senior corner Jaden Walton jumped in front of a Link pass and rumbled 93 yards to the goal line before fumbling through the endzone.

Buc senior linebacker Jack Edwards also turned a Panther fumble with 10 ticks remaining in the contest into a 70-yard return.

“I hate it for our seniors,” said Coy Brotherton. “They’ve gone through so many changes in the last three years. The season didn’t finish how they wanted it to with the three wins, but they helped set a foundation and we’ll be able to look back and thank them for what they did.”

Link would end the night 15-of-27 passing for 193 yards and one interception. Parkway receiver Jalun Reed finished with eight receptions totaling 91 yards, while Brady Norcross pitched in three snags for 68 yards.

Smith paced the Bucs’ attack, toting 22 times for 93 yards and one score. Rains capped his big night at 14 carries for 54 yards and the two scores, while also going 4-of-12 in the air for 78 yards and one interception.

The Bucs will now await the Sunday announcement of their first-round opponent in the 5A non-select playoffs, while the Panthers will begin prep for the 2021 season.