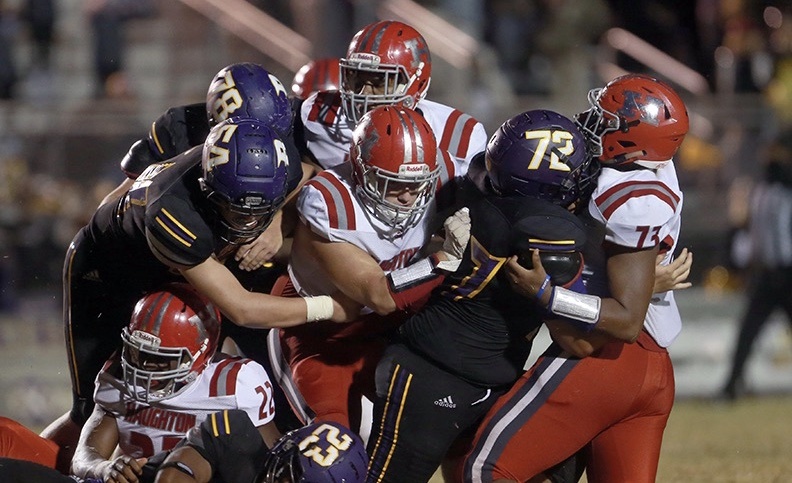 For the second week in a row, the teams played on a wet field. While not quite as bad as Week 2, there was intermittent light rain throughout the game. It was also chilly and windy.

Haughton improved to 2-1 overall and 1-1 in district. Benton fell to 1-2 and 1-1. All three of the Tigers’ games have been decided by seven points or less.

Haughton scored the winning touchdown in the fourth quarter on an 89-yard pass from Colin Rains to Gage East, who caught the ball around midfield racing down the sideline in front of the Bucs bench.

“We got the one big play and that’s the difference in the game,” Brotherton said. “It was a play we had kind of set up earlier in the game. We thought we had it. It was just when were we going to run it. It worked out like we wanted. The quarterback made the throw.”

Benton head coach Reynolds Moore could find no fault with his defense’s performance throughout the game. He said the TD was “kind of a busted play.”

“You go back and look at the stats and we gave up some chunks of yards here and there, but the defense played lights out the entire time,” he said. “It was kind of a busted play right there, crazy stuff right before it. A series of events. It’s just kind of unfortunate a game played so well defensively by both teams was decided by that kind of play.

“It kind of stinks. But they made a play and we didn’t and that’s kind of what it came down to. Our defense stood tall all night long.”

The TD came one play after the Tigers thought they had recovered a fumble. But the Bucs retained possession.

Benton senior linebacker Ashur Hall continued to be a playmaker, intercepting a ball in the end zone in the third quarter. The Bucs also threatened on their next possession but couldn’t convert a field-goal attempt.

Haughton also missed a field goal that could’ve iced the game in the fourth quarter.

Brotherton was also proud of his team’s defensive effort. And he liked the way the Bucs ran the ball after struggling last week against Byrd.

Haughton picked up a big first down late on a run that allowed the Bucs to run out the clock.

“I don’t know what the time of possession was in the second half but we ran it, bled the clock out, got some big first downs,” he said. “That’s big to us to know you have to run it, they know you’re going to run it, and you churn out some first downs and finish a game like that. That’s something we have at times struggled to do that was good to see.

“With the field being wet and raining it just kind of became run the football, play field position and try not to make a big mistake.  We played well in the second half, felt like we dominated the half. But every time we got down there their defense came up with a big play.”

Per Haughton stats, the Bucs finished with 158 yards passing and 155 rushing.

East had all but eight on the Bucs’ receiving yards on six catches.

Last season, the game was dubbed the Battle of the Wooden Hippo. The Bucs won it and now will get to keep it for another year.

“Right back in his home spot,” Brotherton said “He’s home where he needs to be. We’ll let him sit there and hang out in our office for another year.”

Haughton hosts Airline next Friday. The Vikings (1-1, 1-0) were scheduled to play Southwood on Friday night.

Moore knows that a few plays here and there have kept his Tigers from beginning the season 3-0.