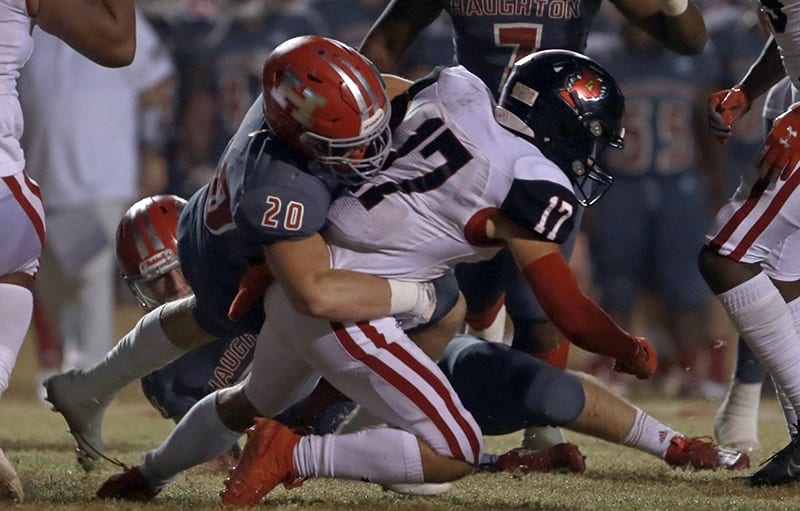 By Dylan Brosette, Special to the Press-Tribune

As Haughton senior linebacker Jake St. Andre tracked Parkway running back Jaylan White on a pitchout to the left of the Panther offensive line during the fourth quarter of the Bucs’ 33-13 victory Friday night, St. Andre was on a collision course with Buccaneer history.

When St. Andre at last collided with White near the left 30-yard hash mark and drove the Panther ball carrier into the turf, he recorded career tackle 331 and cemented his place in Haughton’s history books as the school’s all-time career leading tackler.

“I’m getting emotional right now talking about it,” said Haughton head man Jason Brotherton in presenting the game ball to St. Andre after the win. “He worked for this. He worked and worked. I’ve had a chance to coach a lot of great guys, and he’s (St. Andre) a great worker, great guy and great representative of our program.”

St. Andre is the leader of a Buc defense that allowed 6.8 points per game over its last five games and limited a powerful Parkway offense to just seven points before the starters came out Friday night. Parkway came into the affair posting 22 points per contest.

“I couldn’t believe it,” St. Andre said of setting the record. “It’s a tremendous honor to be able to hold that title. It’s awesome to be able to come out here and handle business tonight. We knew we needed to stay prepared and our coaches did a great job getting us ready.”

St. Andre, the brother of former Haughton quarterback James David Almond, is rated as a 4-star recruit according to Louisiana Gridiron Football, and was named to Haughton’s All-Decade football team this spring.

He recorded 145 tackles as a junior in 2019, helping lead Haughton to an 11-3 record and appearance in the semi-finals of the 5A non-select playoffs.