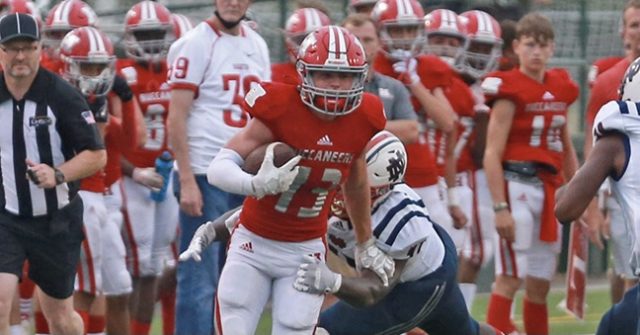 Reynolds Moore has a vivid memory of his first Bossier City Lions Club Jamboree as head coach of the Benton Tigers in 2013.

He was kneeling with his son RJ, then a fourth-grader, beside him. The Tigers were getting ready to play a Parkway team quarterbacked by Brandon Harris in the finale. Despite the jamboree running late, there was still a big crowd. That year, the parish schools’ bands combined for a performance and they were waiting to go on.

“There’s this huge excitement and and RJ is like, ‘Dad, this is real football.’ He got like, there’s a lot of people here and it’s a big deal, even at that age.”

Moore had previously been the head coach at Bolton in Alexandria. At Monday’s coaches’ dinner, he said that was the first time he’d seen a crowd that big at a high school event.

Now RJ is a senior and a key member of his dad’s team at receiver and kicker. He and his Tigers kick off the 68th Lions Club Jamboree and the local high school football season against Parkway on Friday at 5:45 p.m. at M.D. Ray Field at Airline Stadium.

Plain Dealing faces Bossier at 7:15 followed by Airline vs. Haughton at 8:45.

The jamboree is the first since 2019. Last year’s was canceled because of the COVID-19 pandemic.

This isn’t the first time the jamboree is being played a year after being canceled. In 2016, two days of rain before the event was scheduled caused the cancellation because of concerns about field conditions.

That won’t be the case this year. The jamboree marks the debut of the new artificial turf field at M.D. Ray Field at Airline Stadium. Severe weather, which has impacted past jamborees, is the only thing that could derail Friday’s event..

“I think it’s kind of a landmark event for our community, getting it back,” Reynolds Moore said. “It’s definitely the one time of the year when the most fans are gathered.”

The jamboree is also a big deal for reasons other than the action on the field. Each school has a jamboree queen. At past jamborees, dancelines have performed. Some schools’ cheerleaders were on hand at last week’s scrimmages but this will be the first time for others.

“I think it symbolizes as much as a return to normalcy as anything else because for football that was kind of the first thing to go last year,” Moore said. “It’ll be fun. It’ll be hot at 5:45 but we’re excited about it.”

For players, the jamboree is a chance to play in front of what will likely be the biggest crowd of the season. Coaches get an opportunity to work out some kinks before next week’s season openers without having to worry about it counting on their teams’ records.

“It’s such a great experience for our kids just to be able to play in front of that type of a crowd against a parish rival,” Airline head coach Bo Meeks said. “And fortunately on a night where the score doesn’t count. Just a great opportunity to compete and get better again in front of so many hometown people. It’s exciting. We love it too and we’re looking forward to it.”

Last year, scrimmages were allowed but teams didn’t have another chance to fine-tune things before their openers because of the jamboree’s cancellation.

Haughton head coach Jason Brotherton is glad his Bucs will have that chance this year.

“Last year we scrimmaged then had to play a game the very next week,” he said. “To get the scrimmage week then basically you get another glorified scrimmage next week that will be a little more gamelike but still doesn’t actually count, it is kind of good.”

Airline and Haughton may be a little more fired up than usual. They didn’t get the opportunity face off last season because of the pandemic. Parkway and Benton played one of the most exciting games of the 2020 regular season with Benton rallying for a 32-26 victory in overtime.

The jamboree will have special significance for new Bossier head coach De’Aumante Johnson, who will be leading the Bearkats against his alma mater.

Johnson played in four jamborees at Plain Dealing, all against Bossier.