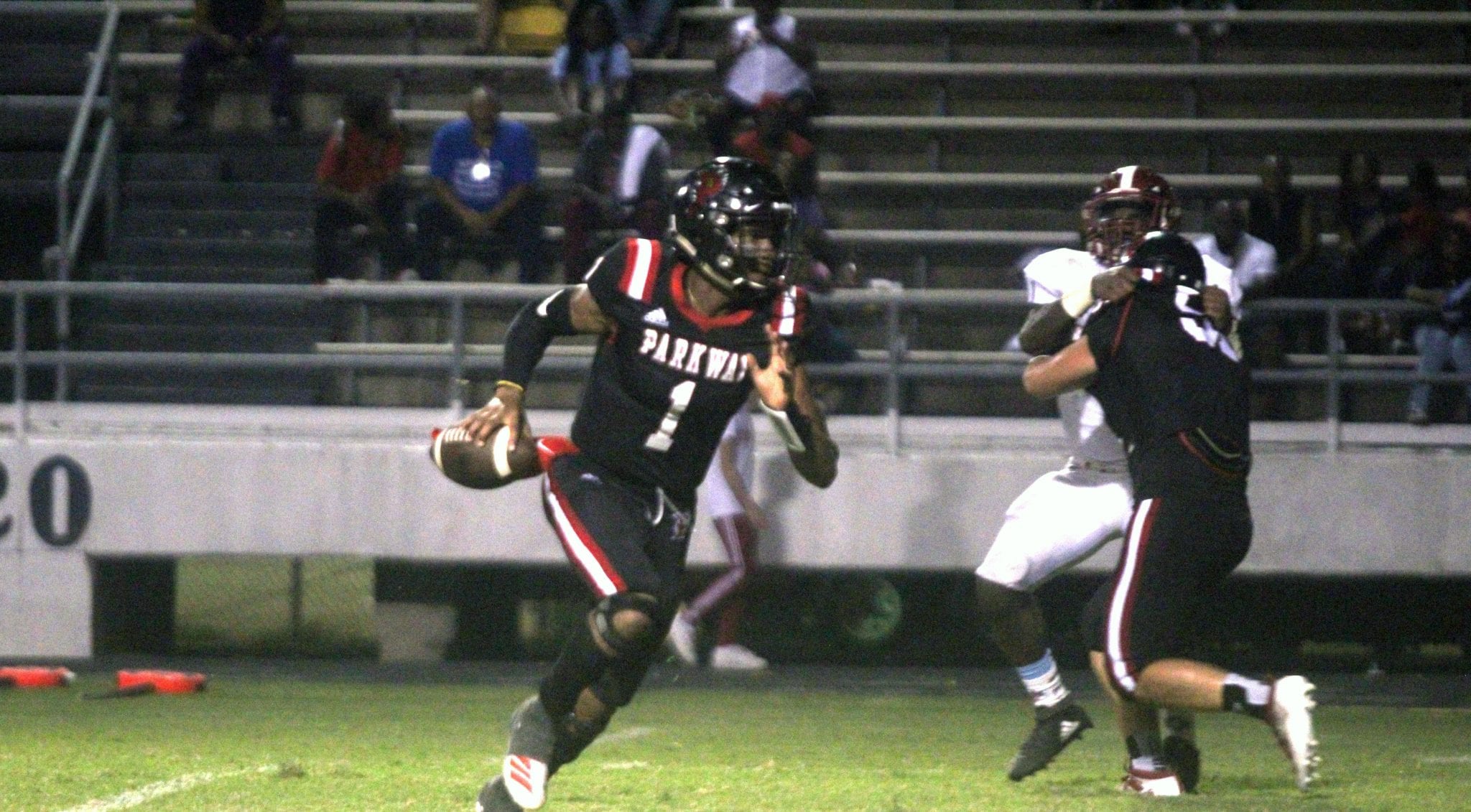 “I thought Gabe was everything we’ve been expecting him to be,” Parkway coach Neil May said. “We knew going into this summer that Gabe was going to come into his own this year and I think he proved that tonight.

“The kid’s got an arm. He’s got legs. He’s got some great offensive guys around him. I’m so proud of our offensive coaching staff. They did a heckuva job tonight.”

That statement was that the Panthers will be a force to be reckoned with this season.

Defensively, the Panthers gave up a few big plays and Minden had some impressive yardage. But Parkway forced five turnovers, including three interceptions by Dariusz Patterson.

Parkway couldn’t have gotten off to a better start. The Panthers rolled to a 27-0 lead. But the Tide returned a kickoff for a touchdown and Trent McLaughlin passed for one to cut the lead to 27-14 at the half.

Early in the third quarter, the Tide had a 55-yard touchdown run called back because of a block in the back. But Minden still was set up with a first down at the Parkway 20.

A defensive holding penalty gave the Tide a first-and-goal at the 10.

On first down, David Bennett and Terrence Murray combined for a tackle for a 2-yard loss. On second down, Trenton Defatta made the tackle after a 5-yard gain to the 7.

Connor Norcross came up with a big play on third down, making a tackle for a 4-yard loss. The Tide elected to go for a field goal which sailed wide right.

Two plays later, Larry hit Peyton Lewis with a short pass over the middle and Lewis turned it into a 55-yard touchdown. Larry and Lewis then connected again for the two-point conversion and Parkway led 35-14.

“We had a big defensive stop there in the third quarter,” May said. “They were driving. They were pushing and our defense got down here and got a stop and I thought that was the turning point in the game.”

“That was one of the statements we really made, just stopping them there in the red zone,” he said. “That was so great. I think that showed what our defense is made of.”

Like the rest of Friday’s area games, the Parkway-Minden game was played on a very hot night.

Parkway running back Jamall Asberry, who gained 75 yards on 13 carries, appeared to get a leg cramp in the third quarter. But otherwise the Panthers seemed unaffected.

“I didn’t even feel it,” Johnson said. “It felt like a regular day. Every day we go 27 periods of practice. We’re out there until 5:15. We just get used to it. We’re acclimated.”

In between those, Gnoble Peterson recovered the ball in the end zone after Asberry fumbled at the four.

Larry’s third TD pass of the first half was a 13-yarder to Asberry.

Larry scored on runs of 6 and 32 yards in the second half.

Per Parkway stats, Bennett led the defense with 12 total tackles, four solo and eight assists. Ty Shelton was in on eight tackles and Murray seven. Norcross and Johnson were both in on six.