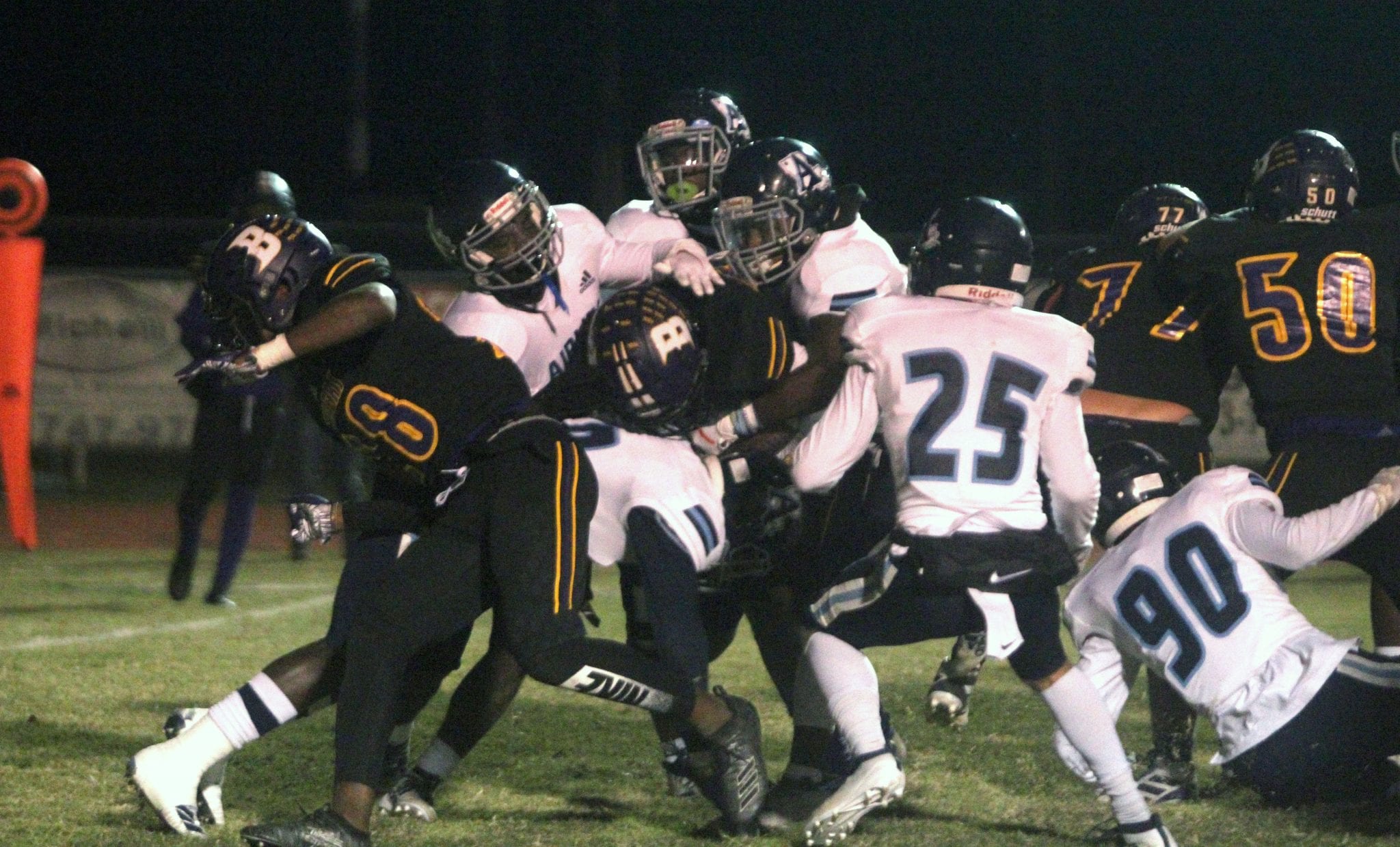 Down 16-7 with just over six minutes to play, the Airline Vikings rallied for a 29-16 victory over the Benton Tigers in a District 1-5A game Friday night at Tiger Stadium.

But with 2:16 left to play in the final quarter, the outcome of the game didn’t really seem to matter.

After catching a short pass, Benton senior running back Cameron Barnett collided with an Airline player making the tackle.

Barnett didn’t get up and the crowd went silent. The game was delayed for about 25 minutes as Barnett was stabilized on the field and then taken by ambulance to the hospital.

He got a big cheer as he waved to the crowd on a stretcher on his way to the ambulance.

He is not expected to play in the Tigers’ final regular-season game against Natchitoches Central, but that is secondary, Moore said.

On the play he was injured, Barnett fumbled, which is hardly a surprise considering the forceful contact that resulted in the injury.

“He was worried about fumbling, but we told him not to worry about that,” Moore said.

In fact, Barnett was a big reason the Tigers were able to take a 9-0 halftime lead. He was a workhorse, finishing the game with 117 tough yards on a whopping 34 carries.

The game was the first meeting on the football field between the Tigers and the Vikings. And it was a hard-fought battle from start to finish on a very chilly night.

Airline improved to 7-2 overall and 5-1 in district. A year after finishing 3-7 and barely missing the playoffs, the Vikings can earn a share of the district championship with a victory over Captain Shreve (8-1, 6-0) in the regular-season finale Friday at Lee Hedges Stadium.

Benton dropped to 4-5 and 1-5. The Tigers close the regular season at Natchitoches Central (3-6, 2-4) with a shot to make the playoffs in their first year in Class 5A.

Benton went into Friday’s game as a big underdog. Until the last six minutes, it looked like the Tigers were going to pull the upset.

Airline quarterback Alex Garcia is also the team’s punter. One fourth down in punt formation, Garcia attempted a pass in the right flat intended for Brian Marshall. Jaden Miller read it perfectly, picked it off and sprinted 45 yards to the end zone.

Garcia then made amends for the interception. On perhaps the game’s key play, he somehow escaped after getting hit by at least two Tigers and shoveled a pass to Daniel Smith, who sprinted down the sideline deep into Benton territory.

The Vikings got within two on Garcia’s 9-yard pass to Rovelle Young and Jackson Tinkis’ PAT with 5:58 left in the game.

The Vikings then forced a punt. Garcia hit Kevin Pouncy in the left flat. He got a few blocks and broke free for a long gain.

Garcia then passed to Thomas Williams for a 9-yard touchdown. The Vikings went for two and got it on a pass from Garcia to Bryson Turner. They led 22-16 with 3:49 left.

Garcia threw his third TD in the final six minutes a few minutes later, connecting with Smith for 28 yards.

“So proud of the ways our guys finished,” Airline coach Bo Meeks said. “Alex Garcia, Kevin Pouncy, Dan Smith, those guys willed us to a win in the second half. The offensive line stepped up when we needed them to and the defense was fantastic the second half. Just a great team win.”

Moore was equally as proud of his team’s effort. After Miller’s interception return, he thought for sure the Tigers would pull off the upset.

With Benton struggling in District 1-5A, there were some who thought the Tigers wouldn’t even be in a position to win in the fourth quarter. Moore wasn’t one of them.

“I talked to our guys all week,” he said. “I liked our plan. I liked their attitude. I liked their effort in practice. And I really, really believed in what was going to happen and our guys did too. And they came out and played that way and they gave us everything they had and I can’t ask for anything else from those guys.”

With Barnett doing most of the damage, Benton took a 7-0 lead early in the second quarter. He scored on a 5-yard run and RJ Moore added the extra point.

The Tigers got a safety on the ensuing kickoff when Marshall, zigging and and zagging while trying to make something happen, ran back and was tackled in the end zone.

Airline had a first-and-goal at the 3 in the first half after a penalty. But the Tigers forced an 18-yard field goal attempt that was missed.

Benton also missed a field goal in the first half.

In the third quarter, the Vikings drove 80 yards for a touchdown, getting good yardage on runs and screen passes. On third-and-5, Garcia completed a 27-yard touchdown pass to Smith.

The Vikings defense also clamped down hard in the final two quarters. Until a couple of pass completions from Caleb Cassidy to Malik Antwine late, Benton’s only two first downs came on penalties.

“Defensively, in the second half, we didn’t let them do anything,” Meeks said. “I was really pleased with our effort.”

Meeks was also very complementary of the way Benton played.

“Hats off to Benton,” he said. “They came to play. They have a really good football team, played extremely hard. In a rivalry game, you have to be ready to go. I don’t think we were at our best early and again, a lot of that had to do with Benton.”