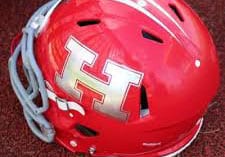 Haughton head coach Jason Brotherton couldn’t have predicted his Bucs’ second-round Class 5A playoff game would end like it did.

But he’s certainly happy with the outcome.

After a CJ McWilliams’ punt pinned the Comeaux Spartans at their 2-yard line, Brian Feaster sacked Tre’ Harris in the end zone for a safety with 1:39 left in the game.

The Bucs then recovered the onside kick and ran out the clock for a 23-21 victory on a rain-soaked night in Lafayette.

“It’s huge for our program,” Brotherton said. “To be playing in the final eight teams in 5A, that’s a big deal for us. That’s hard to do. It’s tough to win playoff games. It’s a step we wanted to take. We didn’t hit our first goal which was to win the district but our second goal was to practice during Thanksgiving and we’re going to get to do that. That’s big.”

In the fourth quarter, the Bucs were fighting to keep their season alive.

But Haughton answered with a long drive mostly on the ground capped by quarterback Peyton Stovall’s 2-yard run with 8:41 left in the game. Carter Jensen’s extra-point kick tied it at 21.

With 4:12 left in the game, Haughton took possession at its 17 after a punt. The Bucs drove to their 48 and faced a fourth-and-5.

McWilliams then booted the punt that set up the safety.

“I don’t know that I’ve ever been in a game where that happened,” Brotherton said of the unusual finish.

With rain coming down off and on throughout the game, Haughton kept the ball mostly on the ground. Comeaux was also able to control the clock.

The Bucs had only two possessions in the first half but still came away with an 8-7 lead.

Stovall scored from 4 yards out and McWilliams ran in a two-point conversion with 1:39 left in the first quarter.

“Comeaux did a great job,” Brotherton said. “They controlled the line of scrimmage and kind of controlled the ball. We didn’t have many possessions and that puts some pressure on you. That made it tough for us.”

The Bucs stretched the lead to 14-7 early in the third quarter on a spectacular 42-yard touchdown run by Keyshawn Davis. He made a couple of great moves to avoid tacklers en route to the end zone.

But a few minutes later, Harris completed a 55-yard touchdown pass to Sean Malveaux and it was tied at 14 with 7:48 left in the third.

A big gamble paid off for the Spartans later in the quarter. The converted a fourth-and-2 at their 38.  Aided by a 15-yard penalty, Comeaux regained the lead on a 5-yard run by Harris a few minutes later.

Davis followed up his stellar game against Ouachita Parish in the first round with 148 yards on 16 carries, an average of 9.3 yards per carry.

With the Bucs opting to pass sparingly in the rain, Stovall completed six of 10 passes for 46 yards. He also gained 40 yards rushing on 12 carries.

McWilliams had 36 yards rushing on five carries and three catches for 15 yards. He also punted twice for a 44.5 average, including, of course,  the key one at the end of game. He had a 19-yard punt return.

Elijah Rochon had a 22-yard catch.

Both teams were hurt by penalties. Haughton had seven for 75 yards and Comeaux 10 for 109.