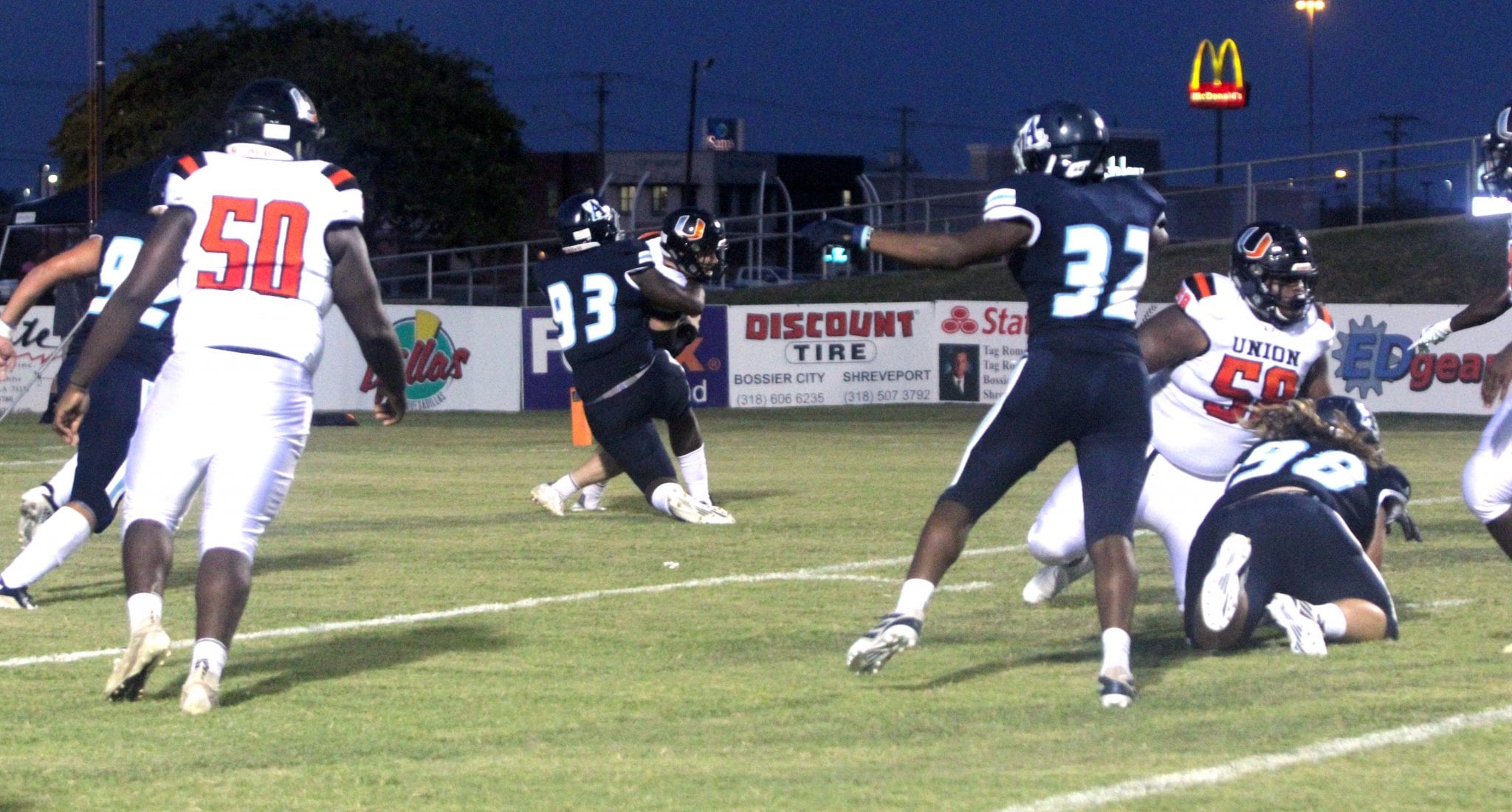 After taking a 16-0 lead in the first quarter, the Airline Vikings looked like they were well on their way to a big win against the Union Parish Fightin’ Farmers on Friday night at M.D. Ray Field at Airline Stadium.

But Union Parish didn’t go away. The Fightin’ Farmers seized the momentum in the second quarter, and it appeared Airline’s lead was going to be just 16-12 at the half.

Up stepped Brandon Marshall. As he has been so many times in his career, the senior defensive back was in the right place at the right time.

He intercepted a tipped pass and returned it 48 yards for a touchdown with just 7 seconds left in the second quarter.

Jackson Tinkis’ PAT made it 23-12 and the momentum was squarely back with the Vikings.

“They’re trying to make a play before the half,” Airline coach Bo Meeks said. “The ball got tipped up. If it’s tipped there’s a good chance one of the Marshalls is going to find it. Brandon found it and ran it back and completely gave us some momentum going into the second half.”

On the first play of the second second half, Airline’s Kevin Pouncy bent down to catch a pass in the right flat, twisted around and raced 51 yards down the sideline untouched for a score.

The Vikings’ defense took over and Airline indeed finished with a big victory, 36-12, over the visitors from Farmerville.

“Those two scores really put it away right there,” Meeks said. “But they kept fighting and we kept having to fight them off. Tremendous effort from our guys, our coach coaches and players tonight.”

Union Parish (1-1) came into the game ranked No. 5 in the Louisiana Sports Writers Association Class 3A poll.

“Just really proud of us as a team tonight,” Meeks said. “They (the Farmers) are always very physical and very talented. But I thought we came out and played physical. We got on them early, then hit a little lull. But we battled back and put the game away when we needed to.”

“There are some things to grow on. But when you can grow on ’em with a win that’s a whole lot better.”

Airline’s defense set the tone early, stopping the Farmers on third-and-short twice and forcing punts. Then Willie Sanders made the first big play, intercepting a Trent Ginn pass at the Union Parish 12.

The Vikings made the mistake hurt with Rovelle Young scoring on a 1-yard run with 5:45 left in the first quarter.

Airline caught a break late in the quarter when Union Parish was called for unsportsmanlike conduct for jumping the center on a missed field goal attempt.

The penalty gave the Vikings a first down at the 8 and Alex Garcia hit Daniel Smith for the touchdown. Tinkis’ PAT made it 14-0 with 1:23 left in the first.

On the ensuing kickoff, the Farmers misplayed the kickoff and the Vikings made the tackle at the 2.

Airline defensive lineman Triveon Wilkins then broke through and tackled Ginn in the end zone for a safety and a 16-0 lead with 1:10 still to play in the first.

Union Parish put together its only real sustained drive of the game in the second quarter for a touchdown. But Airline stopped the two-point conversion attempt and still led by 10.

Garcia made his only real mistake of the game later in the quarter, throwing an interception that gave the Farmers a short field. Union Parish capitalized, but the Vikings stopped the two-point conversion attempt again.

That set up Marshall’s heroics.

Pouncy’s touchdown was the only one of third quarter. Airline’s final TD came on a 26-yard run by Young.

The Airline defense dominated the second half. Union Parish’s lone scoring threat ended with a turnover on downs at the Vikings 27.

“Couldn’t be prouder of the defensive effort tonight,” Meeks said. “Coach (Seth) Stowell, Coach (Brian) Taylor, Coach (Schirra) Fields, the job they did with those guys, having them ready, and the guys executing the gameplan beautifully. Really proud of the way they played against a very explosive team tonight.”

Garcia had his second solid game, completing 13 of 31 passes for 225 yards.  Pouncy finished with four catches for 87 yards. Smith had five for 77.