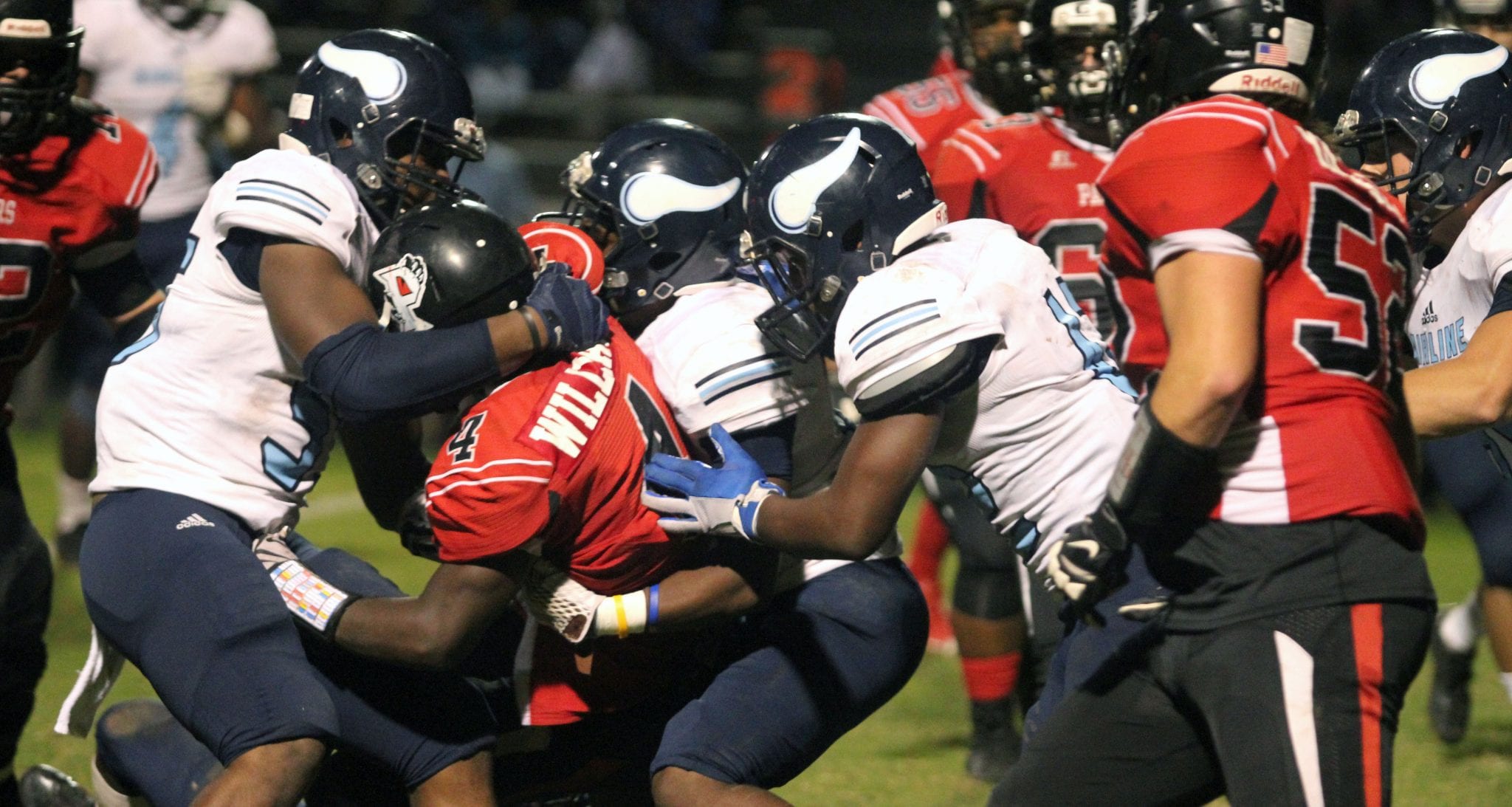 When Airline took the second-half kickoff and drove it straight down the field for a touchdown, the Vikings trailed the Parkway Panthers by just three points.

But Parkway answered with a touchdown followed by a defensive stop and another touchdown to take control en route to a 55-38 District 1-5A victory at Preston Crownover Stadium.

Parkway closed the regular season 9-1 overall and 5-1 in District 1-5A. The Panthers finished second to Evangel Christian. Parkway can claim the unofficial non-select school championship, though, with a 5-0 record.

Airline finished the regular season 6-4 overall and 3-3 in district. The Vikings tied with Byrd for third.

Parkway and Airline are both headed to the Class 5A playoffs. According to Louisiana Sportsline, the Panthers were No. 5 in the power rankings through Friday’s games and will host a first-round game. Airline was No. 21 and will be on the road.

Official pairings will be announced Sunday.

When Justin Rogers hit Robert McKnight with a 12-yard shovel pass for a touchdown to give Parkway a 48-31 lead late in the third quarter, it represented a 34-point turnaround.

Airline led 10-0 less than two minutes into the game. The Vikings got a 25-yard field goal from Noah Sheets. Zylon Newson then scored on a 4-yard run after Parkway failed to get a punt off.

One play after the kickoff, the Vikings recovered a fumble at the Parkway 29. Six plays later Cameron Davis scored and Airline led 17-0 with 5:57 left in the first quarter.

Things then began to turn in Parkway’s favor. On the first play after the kickoff, Robert McKnight raced 83 yards for a touchdown. He had a 76-yard TD run in the second quarter.

“Very impressed with way we fought back,” Parkway coach David Feaster said. “It’s nice to get hit like that and have all those bad things happen and we come to the sidelines and our guys aren’t panicking. We’ve gotten to the point from playing teams like Lufkin and Evangel and so forth that it’s not just a shock if we turn the ball over on the 1-yard line and they score and go ahead. Our defense knows there are going to be times like that when you have to go out and play. So we were a lot calmer on the sideline.”

McKnight, a senior who has helped the Panthers win a lot of games, accounted for 292 yards. He rushed for 205 yards on 11 carries. He also caught three passes for 87 yard and two touchdowns.

The game as a whole was dominated by the offenses. According to Parkway’s officials stats, the Panthers had 534 yards and 27 first downs and Airline had 385 and 26.

Davis and senior Brian Fielding, who has missed significant playing time because of an injury, both had nice games. Fielding capped the Vikings’ TD drive to start the second half with a 22-yard run. He also scored the TD that got the Vikings within 10 in the third quarter.

“I was proud of our kids in general,” Airline coach Bo Meeks said. “I thought we battled. The two things we preach are turnover margin and explosive plays and we lost those. But at the same time Parkway has a great football team. We knew we were going to have to play really well. We weren’t always as sharp as we could be execution-wise but effort-wise I was really proud of our kids the way they fought. Offensively, it was the best we’ve played all year.

“I think we’ve got to be encouraged and have some confidence, the way we fought and the way we played offensively. That’s the best we’ve run the ball all year long so that’s really encouraging. Brian back was good for us. It’s just about us continuing to grow. We’re running out of time but we showed great progress tonight and hopefully we carry that over into next week.”

Feaster was impressed with Airline, saying he wouldn’t want to play the Vikings again in the playoffs.

Taking advantages of some breaks, Parkway scored three unanswered touchdowns in the final eight minutes of the first half to take a 34-24 lead.

After Davis scored on a 17-yard run set to give Airline a 24-13 lead, McKnight promptly got Parkway back within four with his 76-yard run.

With Parkway facing a fourth-and-25 from its 23, the Vikings were penalized for roughing the punter, giving the Panthers an automatic first down.

A few players later, Rogers and McKnight hooked up for a 49-yard score, giving the Panthers their first lead of the game at 27-24.

With just less than two minutes remaining in the half, the Panthers forced a fumble on a sack and Parkway’s Nick So’oto recovered at the 15. Rogers ran it in from there and Chase Hill added the PAT, making it 34-24.

Rogers completed 15 of 24 passes for 219 yards and four touchdowns. He hit Terrace Marshall Jr. for 39 yards for the Panthers’ second TD. He also passed 16 yards to tight end Kendal Brown for a score after Airline had cut the lead to 34-31.

Airline put a lot of pressure on Rogers throughout the game. He had 65 yards in losses with most of that coming on sacks in the first half. In the second, Rogers was able to escape the rush and scramble for several big gains and finished with 15 net yards.

He scored the final touchdown on a 3-yard run on fourth-and-goal, rolling left to avoid the rush and dashing to the corner of the end zone.

“I think we got a little tired of chasing him to be honest with you,” Meeks said. “We got great pressure on him. He’s a phenomenal athlete, a phenomenal player, and you’ve got to keep those guys hemmed up. They’re going to get away some. He got away a lot in that second half. Hats off to Parkway. They played really well.”

Eric “EJ” Williams also had a good game, rushing for 113 yards on 11 carries.

According to Parkway stats, Joey Cook and David Morales were both in on 10 tackles for the Panthers. Trace Schmid was in on nine. Stoney Butler and Malcolm Banks were in on eight each. Tony Beckwith and So’oto were in on seven each.