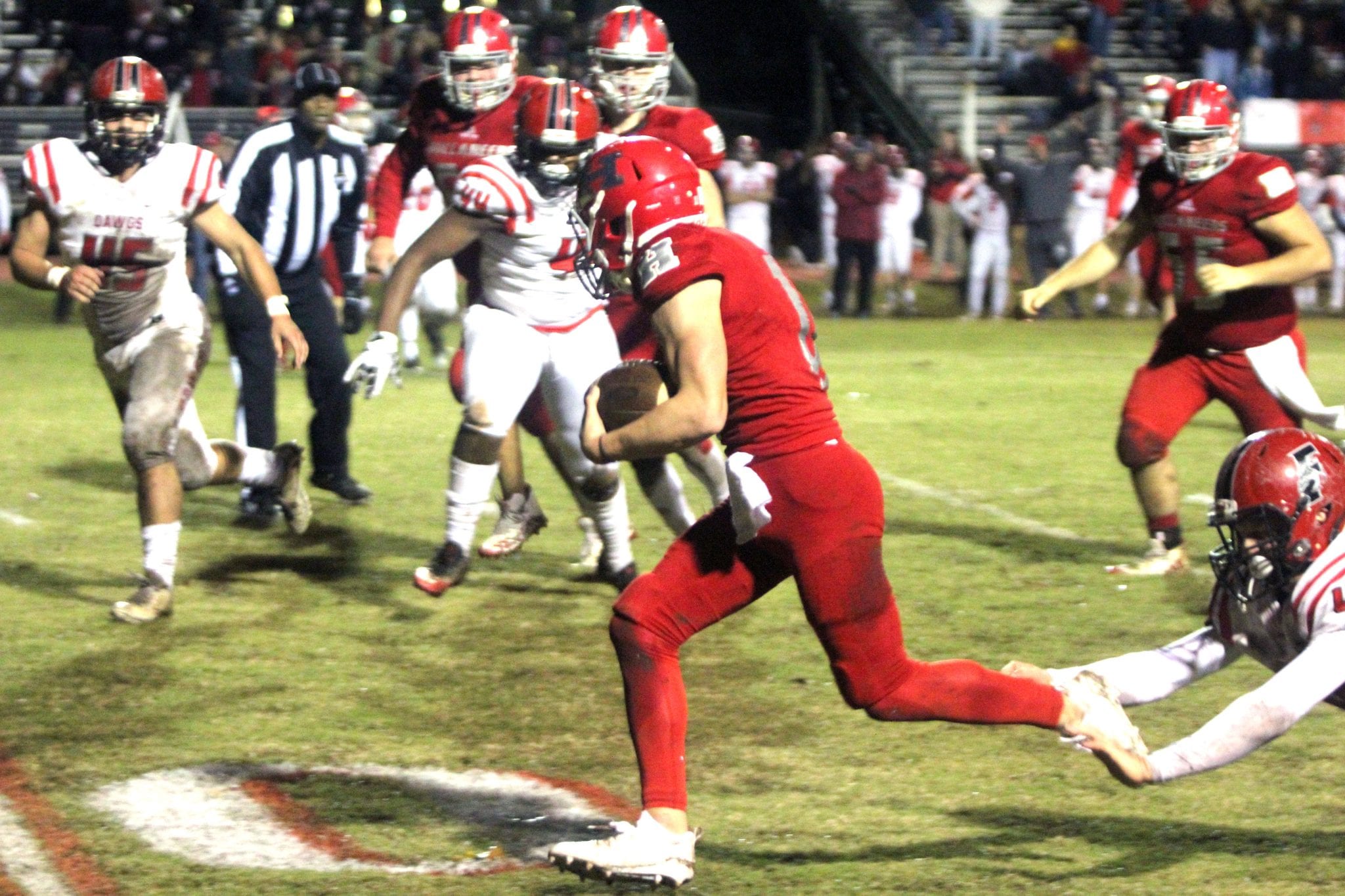 When the Fontainebleau Bulldogs scored two quick touchdowns early in the second half to tie the game, the Haughton Buccaneers didn’t panic.

Fontainebleau, which made the long drive from Mandeville, closed its season 6-5.

Haughton coach Jason Brotherton was pleased but not really surprised at the way his Bucs responded after Fontainebleau tied it. The Haughton offense had been virtually unstoppable all night.

“They got it back even and we played well, kind of put the foot down again,” he said. “What can I say? We played well on offense all night.

“Our kids have responded all year when that’s happened. We play in these kind of games all the time. Our district is tough and it prepares us for that.”

Quarterback CJ McWilliams, a junior, accounted for seven touchdowns. He scored on runs of 17, 1, 20 and 28 yards in the first half. McWilliams finished with 176 yards on 19 carries, an average of 9.3 yards per carry.

He also completed six off 11 passes for 209 yards and three touchdowns, ran in a two-point conversion and returned a punt 27 yards.

Tristan Sweeney had four catches and three of them went for touchdowns covering 78, 29 and 36 yards. The final one came on a fourth-and-10 with 2:21 left in the game.

Sweeney also had two kickoff returns in the first half that gave the Bucs short fields that led to touchdowns.

“He’s a big-time playmaker,” Brotherton said. “Those two guys are as good as we’ve had here. They make plays. Every time they get it they have a chance to score. He made some big catches and big special teams plays.”

Of course, the Haughton offensive line made McWilliams’ and Sweeney’s heroics possible.

“Things were just opening up for us,” McWilliams said. “The offensive line was doing great. They were doing their assignments. Things were working out for us and we took advantage.”

McWilliams took over at quarterback after sophomore Peyton Stovall suffered an injury to his right (throwing) shoulder late in Week 7’s victory over Byrd. Stovall, who tried to come back last week against Airline but re-injured his shoulder early in the game, was in the midst of an outstanding season.

Brotherton had to move McWilliams, who was having a great season at receiver, to quarterback. McWilliams had a lot of experience at the position. He was the quarterback at Haughton Middle School in the seventh and eighth grade and also on the Haughton freshman team. Last year, he was the Bucs’ No. 2 QB.

“It’s been good,” he said of the move. “I’ve grown up playing quarterback and got to high school and was kind of moved all over the place, but I’m just here to help the team get the win.”

“We thought we could score a lot, and I thought they could score a lot,” Brotherton said “The game kind of went like we expected. We knew we were going to have to score a lot to win and the defense got some big turnovers in the second half. That was the difference.”

The Bucs held the Bulldogs out of the end zone for the final 20 minutes of the game.

Logan Wilkerson, Jacob Stephens and Jake St. Andre intercepted passes in the second half. The Bucs also put a lot of pressure on Bailey.

“We finally got the stops and we kept scoring and we were able to run some clock in the fourth quarter,” Brotherton said. “They responded when we had to have it.”

Carter Jensen was a perfect 7-of-7 on extra-point kicks.

The game was Haughton’s first home playoff game since 2014. It was also the Bucs’ first playoff victory since that season.

Haughton will visit John Ehret in the playoffs for the third straight year. The Bucs fell 46-13 in the first round last season and 48-27 in 2016, Brotherton’s first year as head coach.

“Regardless of what’s happened in the past we’ve never played well there,” Brotherton said. “I just want to go down there and play well. They may still beat us but if we give them our best effort we’ll have a chance to win.”