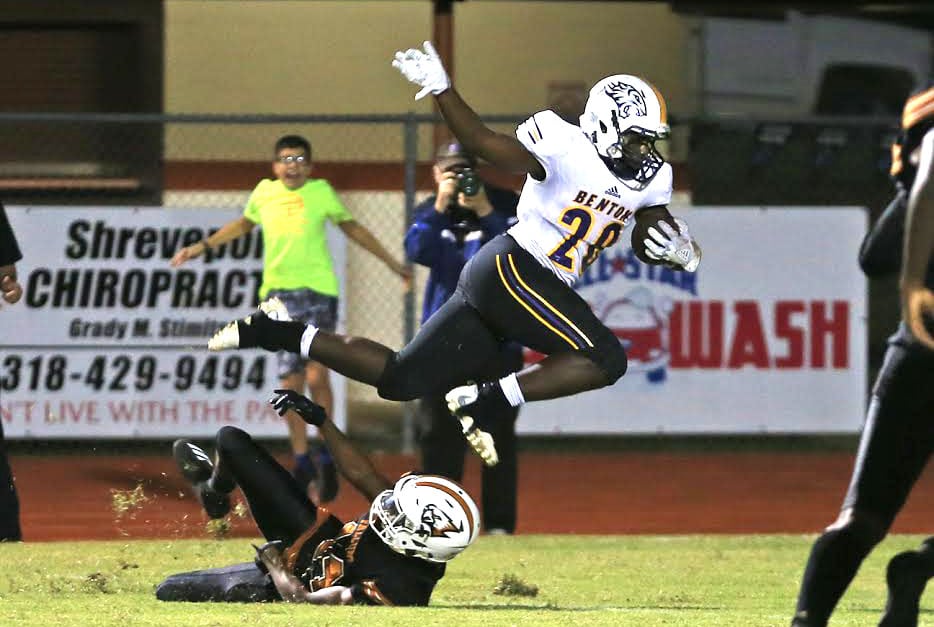 Last week, Benton coach Reynolds said that undefeated and preseason District 1-4A favorite Northwood might beat his team, but the Tigers would make the Falcons earn it.

Well, the No. 4-ranked Falcons did win Thursday night at Northwood’s Jerry Burton Memorial Stadium. But boy did the Tigers make them earn it.

The Tigers lined up for an apparent extra-point try then called time out. When they returned to the field, they lined up for a two-point conversion attempt.

When play resumed, Benton sophomore quarterback Clint Lasiter rolled left. It looked like there was at least one open receiver in the end zone. But under heavy pressure, he had to get rid of the ball quickly to avoid a sack and it sailed over everyone’s head out of the back of the end zone.

Northwood quarterback Luke Bogan took a knee twice to run out the clock and the Falcons had the 28-27 victory.

Moore said he decided to go for two because his defense had been on the field for much of the second half and was tired.

“We had the right call,” he said. “They just had one guy off the edge right there. If we had just a split second we score. We had two guys open. I know at that point some people say tie at home, win on the road, whatever. The coaching staff talked about that. We all thought it was the right thing to do. Looking back you kick it and go to overtime but right now I still think it was the right call.”

Northwood improved to 5-0 overall and 2-0 in district. Defending champion Benton fell to 2-3 and 1-1.

It was the Falcons’ first win in the series since 2013.

Talking to his team after the game, an emotional Moore told his players how proud he was of them, his hoarse voice almost a scream.

He repeated those sentiments to reporters, albeit in a calmer tone.

“I’m extremely proud of our guys,” he said. “I just told them there’s a lot of fight in them. 28-7, very little time left, they could’ve quit, could’ve folded up, said, look, that’s a great football team, we’re behind and there’s no chance, but our guys fought like crazy and I mean just didn’t quit. That’s why I wanted to go for two there. They fought back in. I told them we didn’t come to play for a tie. We came to win.”

After the Falcons took the 28-7 lead, Benton got some life with an interception by Jayree Anderson at the Tigers 11, stopping another scoring threat. Lasiter then drove the Tigers down the field. He capped the drive with a 4-yard TD pass to Malik Antwine with 3:35 left.

Benton attempted an onside kick but Northwood recovered. Moore stopped the clock twice with timeouts. On third down, Sam Simmons intercepted a deflected pass and went 57 yards to the end zone, breaking tackles in the process.

As expected, Benton attempted an onside kick. The Tigers got a good bounce and jumped on the ball. Keldric Moody had a nice run to the Falcons 24. Lasiter then kept the ball and ran to the 14. Moody sliced through a big hole in the left side of the line to the end zone, setting up the dramatic finish.

Despite Benton’s having won or shared the district title three of the last four years, Northwood came in as a big favorite with its perfect mark, lofty ranking and home-field advantage.

The Falcons return several key players off last year’s quarterfinal team that lost to Benton 50-42 in a game that ultimately decided the district championship. The Tigers graduated most of the players who helped them win that game.

When Northwood jumped out to a quick 14-0 lead six minutes into the game, it looked like the rout might be on. The Falcons’ first TD came on a 56-yard pass from Bogan to Datraveon Brown. The second one came after the Benton punter couldn’t quite handle a somewhat low snap. Forced to run, he was tackled well short of a first down at the Benton 22.

Bogan sneaked in from a yard out on fourth-and-goal from the 1. A facemask penalty on the previous play kept the drive alive.

But the Benton defense kept the Falcons out of the end zone the rest of the half, coming up with two big fourth-down stops inside Tigers territory.

On the second one, the Tigers forced an incompletion on fourth-and four from the 14.

Lasiter then hit Bubba Osby with a short pass and he turned it into an 81-yard gain. A few plays later, Lasiter drilled a 3-yard TD pass to Osby with just 11 seconds left in the half. The PAT made it 14-7.

Benton was unable to do much on offense in the third quarter. Northwood went up by two scores on a short Terrance Cook TD run with 2:53 left in the third.

The Tigers then appeared to get something going on offense, but a pass completion to the Northwood 31 early in the fourth quarter was wiped out by a penalty.

After an interception, the Falcons took the 28-7 lead on a pass from Bogan to Cook with 10:41 left in the game.

Even if Northwood had won by two TDs, it would have been fair to say the Tigers made them earn it.

Northwood has some tremendous playmakers, including Bogan, Brown and Cook, who rushed for more than 100 yards. All three were outstanding, but the Benton defense held its own.

Simmons, Cole Horton and Schoth had five tackles apiece. One of Horton’s was a sack. Schoth also had an interception in the third quarter.

Lasiter completed 19 of 35 passes for 216 yards with one interceptions. He also rushed eight times for 42 yards.

— Featured photo of Benton’s Keldric Moody by Robert Summerlin, Special to The Press-Tribune