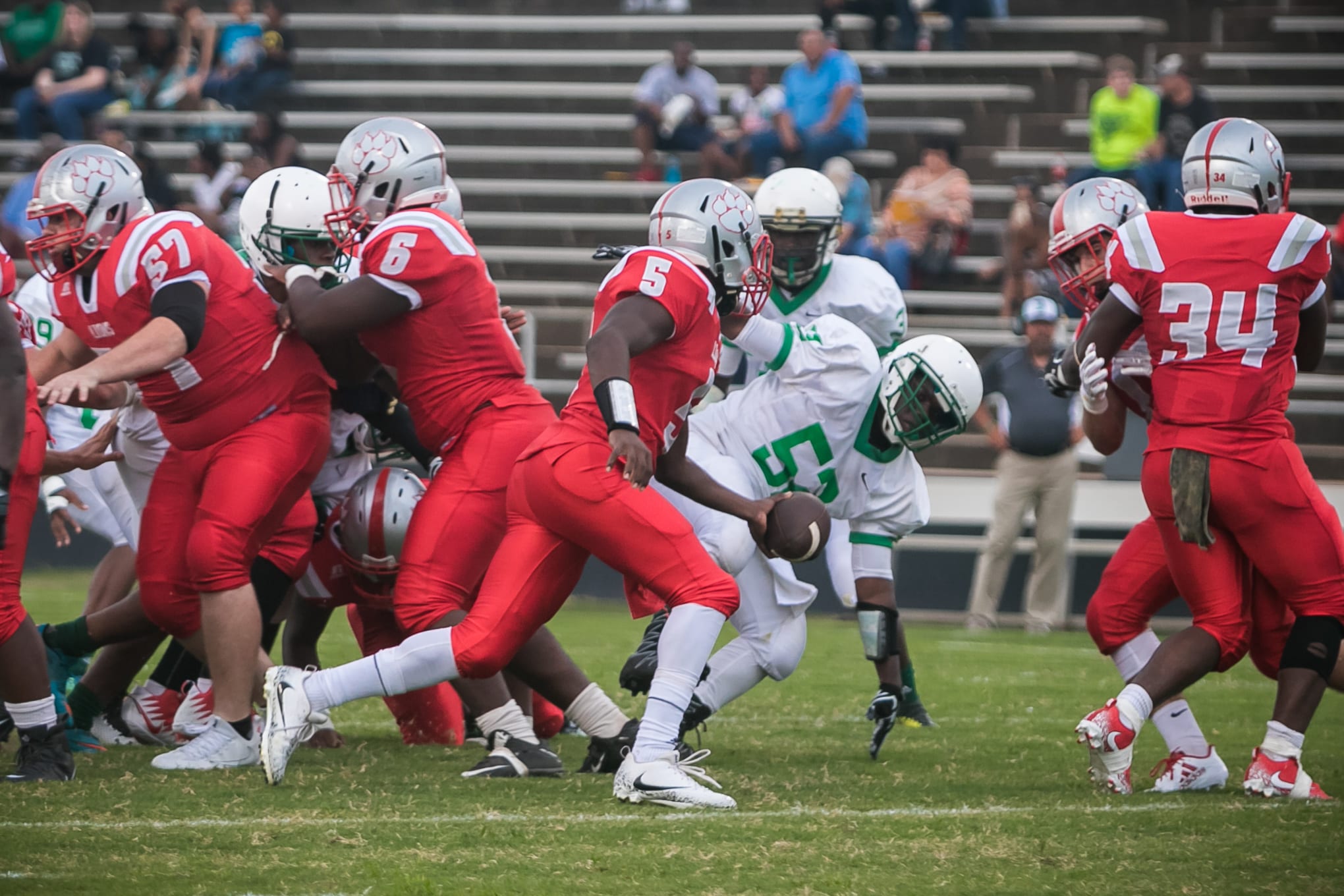 Scrimmages and last week’s Bossier Lions Club Jamboree have given parish fans a taste of high school football the last three weeks.
But the preliminaries are over now. It starts to count Friday night with season openers. Five Parish teams begin their seasons at home.
Airline hosts Union Parish, Haughton hosts Minden, Parkway faces Booker T. Washington at Preston Crownover Stadium, Benton hosts Wossman and Plain Dealing hosts University Academy of Central Louisiana.
Bossier is the only team on the road. The Bearkats travel to Tallulah to face Madison.
The Lions Club Jamboree served as a dress rehearsal for the openers.
Each “game” consisted of two 15-minute halves. In the opener, Bossier rallied past Plain Dealing 20-14. Airline followed that with a 19-0 win over Haughton.
In the nightcap, Benton defeated Parkway 23-14 in an outcome that was somewhat surprising even though both teams return several key players from highly successful 2016 teams.
Parkway has two players, senior quarterback Justin Rogers and senior receiver Terrace Marshall Jr., considered among the best in the nation at their positions by some recruiting experts.
Rogers was the Offensive MVP on The Press-Tribune’s All-Parish team last season. Marshall is a two-time first-team Class 5A All-State selection.
Rogers ran for one TD and passed to Kendall Brown for another in the jamboree. Marshall caught a 40-yard pass.
Benton senior quarterback Garrett Hable, senior receiver Doyle Adams Jr. and senior running back Jermaine Newton were all first-team All-Parish in 2016.
All three played a role in the jamboree win.
Hable threw touchdown passes to Bubba Osby and Adams. The latter came with 15 seconds left in the half and gave the Tigers a 20-14 lead.
Benton coach Reynolds Moore knows every team came out of the jamboree 0-0, but that doesn’t mean it was meaningless.
Parkway has understandably received a lot of preseason hype. That gave Benton a little extra motivation.
“The jamboree is fine but it’s a glorified scrimmage and it doesn’t mean anything,” Moore said. “We don’t get a win. They don’t get a loss. My butterflies come thinking about Wossman. But to play like that, forget about the outcome of the game, to execute on both sides of the ball like that. It really sets the tone for our program for the season and I think it’s a huge step forward.”
Moore and Benton are now focused on a Wossman team that went 8-4 last season.
Moore said Benton scheduled Wossman because it will help the Tigers get ready for district play.
“I knew they’d be a very physical team,” he said. “I knew they’d be very athletic. And quite frankly, I thought they’d remind us a lot of (defending District 1-4A champion) Woodlawn. It’d be one of the better chances for us to get a look at one of the best teams in our district.”
Parkway is a heavy favorite against BTW. The Lions moved up to Class 4A after the school merged with Fair Park. Former Airline and Fair Park coach Mike Greene has taken over as head coach.
Airline faces a Class 3A Union Parish team that went 4-7 last season. The Vikings have defeated the Farmers in two straight season openers, but Airline coach Bo Meeks expects a good test.
“They are very well coached,” he said. “Coach Gerald Spatafora does a really good job. They play hard; they play physical. They always have good athletes. It’s always a good challenge for the first week. We have to be prepared to play our best.”
Junior quarterback Brad Fream, who has been nursing a sore shoulder, saw his first action of the preseason in the jamboree. He threw TD passes to C.J. George and Coby McGee. The latter covered 90 yards.
Freshman Jackson Tinkis also kicked a pair of field goals.
Meeks liked what he saw out of his team, but he wants his players to keep things in perspective.
“The big thing I think is using (Friday) night is to understand not to be satisfied with that, understand how good we have to be to get the next one,” he said “We have to improve each week.”
Haughton will be trying to avenge last year’s 23-20 loss to Minden. The game was originally scheduled for Minden but was moved because reconstruction of the Crimson Tide’s stadium is not finished.
Minden lost more than 20 seniors off last year’s team. Receiver/running back Patrick Heard, one of the fastest players in the state and a first-team All-District last season, returns.
Bossier coach Michael Concilio thought his team showed improvement in the jamboree from the Bearkats’ scrimmage against Red River on Aug. 18.
He was especially pleased the players were able to stay focused in the second half after Plain Dealing’s Ty Thomas returned an interception for a TD on the final play of the first to give the Lions a 14-10 lead.
“We moved the ball, but more importantly we really forced some three and outs in the second half and showed some good, good enthusiasm,” he said.
Rico St. Fleur kicked two field goals for Bossier. Quarterback Isaiah Blair-Wallace and running back Decamerion Richardson scored rushing touchdowns.
Madison, Bossier’s first opponent, went 5-5 last season. The Jaguars are members of 2-3A.
Plain Dealing scored on its first drive in the jamboree and got the big play from Thomas.
The Lions are facing a University Academy team playing for district honors in the LHSAA for the first time. The school is located on the campus of LSUA.
Last year, UA won only one game and that was by forfeit.