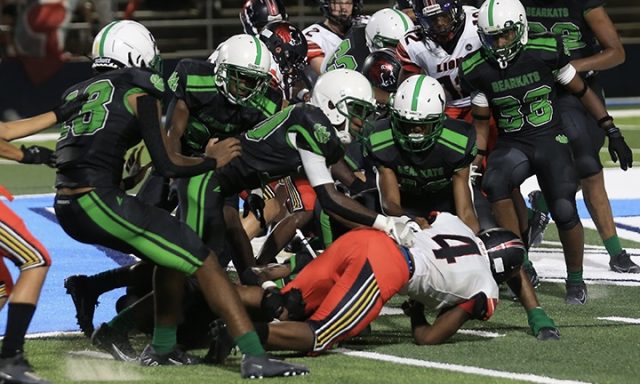 For the first time since 2018, the Bossier City Lions Club Jamboree went off without a hitch Friday night at M.D. Ray Field at Airline Stadium,

Last year, the jamboree was canceled because of the COVID-19 pandemic. In 2018, it was suspended during the second “game” because of severe weather and ultimately canceled.

The 68th version of the jamboree started just before 5:45 p.m. with the temperature a breezy 94 degrees and clouds blocking the sun. The sky quickly cleared though and it was definitely hot during the first 24-minute “game” between the Benton Tigers and Parkway Panthers.

Once the sun went down, the breeze remained and the temperature dropped to the low 80s, making it comfortable for fans. A good crowd was on hand for the first event played on Airline Stadium’s new artificial turf field.

As far as the action on the field, it was a pretty typical jamboree. There were plenty of penalties and other mistakes coaches will be looking to correct before the regular-season openers.

But there were also enough positives to give every squad at least some reason for optimism.

While it doesn’t count on the teams’ records, they do keep score at jamborees.

In the first “game,” Parkway defeated Benton 24-14. In the second, Bossier downed Plain Dealing 26-0. In the nightcap, Airline defeated Haughton 26-7.

Parkway head coach Coy Brotherton wanted to see improvement from his team after last week’s scrimmage in which the Panthers scored one touchdown and gave up four.

That’s what he got. It helped that the Panthers were missing just two starters as opposed to 10 last week.

“It was a lot better,” Brotherton said. “Very proud of the way we played. We stressed all week after last week’s scrimmage, just constantly on and off the field, effort and attitude.

“Last week we kind of let the emotions get to us. First game in a long time, we just didn’t respond to a lot of adversity. So this week very proud of how we handled practices, handled the game. And you know when you work hard It pays off.”

Parkway took a 10-0 lead in the first 12-minute half. Aeron Burrell capped a 78-yard drive on the Panthers’ first possession with a 25-yard field goal.

Cannon Link hit Ron Richmond with a 66-yard touchdown pass and Parkway led 10-0 at the break.

Benton twice drove inside the Parkway 20 without scoring in the first half. On their final drive, the Tigers reached the 4 but time ran out.

Benton rallied to take a 14-10 lead in the second half. Landon Duggan burst through a big hole up the middle on the Tigers’ first possession and went 65 yards before being dragged down at the 1. Greg Manning ran for the touchdown.

A pass from Gray Walters to Cade Stewart on 3rd-and-14 from the Benton 17 kept the drive alive.

On the ensuing kickoff, the ball looked like it was going out of bounds. But it bounced off the turf and stayed in bounds. The Tigers recovered at the Parkway 4 and Manning scored his second touchdown. RJ Moore’s PAT gave Benton a 14-10 lead with 9:25 left.

Manning, a sophomore, showed plenty of potential, including a 35-yard run on Benton’s first possession of the game.

Parkway answered on its next possession on a 39-yard catch-and-run by Jaylan White on a pass from Cannon Link.

Parkway’s BJ Patterson had a sack on Benton’s ensuing possession. Richmond raced 32 yards for the final touchdown with 1:57 left.

Several Benton players suffered leg cramps in the second half.

Benton Head Coach Reynolds Moore said the scrimmage went about like he thought it would.

“We’ve been outside for an hour this week (because of the heat),” he said. “We kind of got a little bit of a walkthrough yesterday but haven’t been in pads all week. Had a ton of guys cramping up. I know everybody’s been in the same boat so I’m not making excuses. It wasn’t as hot as it has been but I still think it got to our guys, several getting sick, several cramping up.”

Moore was happy his team came away with no significant injuries, though.

“I told the guys all week, win or lose, I don’t care, I just want to stay healthy,” he said. “We stayed pretty healthy, had a couple of guys already out — starting receiver’s out with Covid. And one of our starting linebackers was hurt.”

The Tigers will get another shot at the Panthers on Sept. 24 at home.

“We knew Week 4 is what mattered,” he said “I wanted to play better than we did, honestly. I thought Parkway played really hard, did some really good stuff, gave us some fits with some formations. The things we see on film now we have time to adjust to  I think.”

Bossier senior receiver Joseph Manning showed he could very well be as good on the football field as on the basketball court where he is one of the state’s top players.

Manning scored three touchdowns in the Bearkats’ victory, including a 67-yard catch-and run on a pass from Carlos Butler on the final play of the first half. That TD put Bossier up 20-0,

Despite the victory, Bossier first-year Head Coach De’Aumante Johnson was anything but pleased with his squad’s  performance overall.

“I expected better out of our team,” he said. “There are still a lot of gray areas. That’s to be expected. We did a few good things. But I don’t think we played well at all, not good enough to win the state championship, and that’s my expectation. So I’m not pleased at all.”

Manning also scored on a 15-yard pass from Butler that capped a 54-yard drive and a 10-yard run following a Lions turnover. He finished with six catches for 125 yards.

On his TD run, Manning picked up a dropped lateral pass after it was knocked backwards and managed to still make it to the end zone.

“Joe Manning made a few big plays,” Johnson said. “He’s a great receiver, a great leader. I see it every day at practice so that’s to be expected.”

Butler scored the Bearkats’ other TD, making the most of a broken play on a 34-yard up the middle. Tristan Nash had a 40-yard run.

Plain Dealing got off to a good start, moving into Bossier territory behind some hard running by Ardrevious Washington-Carper. But the drive stalled.

“We’re just young, and we made a lot of young-team mistakes,” Plain Dealing Head Coach Christopher Wilson said. “They scored four touchdowns and we gave away four touchdowns. We missed tackles, we weren’t aligned right, we didn’t make blocks and we just didn’t have a good night. I feel like we digressed from last week and we just got to get better for next week when it starts to count.”

Airline and Haughton both had impressive performances on offense.

The Vikings drove 67 yards on their first possession. Michael Johnson and sophomore quarterback Ladarius Epps both had good runs. Epps hit Daxton Chavez for the touchdown with less than two minutes gone. The Vikings failed to get the extra-point kick off after a high snap.

Haughton answered with a 62-yard TD drive. Colin Rains completed some big passes and scored on a 7-yard run. The Bucs led 7-6 with 6:19 left in the first.

Airline then went 67 yards on its next possession with Johnson scoring on a 53-yard run. The Bucs stopped a two-point conversion run and the Vikings led 12-7.

Haughton then put together another impressive drive behind the passing of Rains and running of Dexter Smith. But a fumble inside the 5 ended the threat.

After forcing a punt, Haughton threatened again. But the Bucs fumbled away the opportunity inside the 10 and Airline led 12-7 at the half.

Haughton got the ball to begin the second half and started moving again. But Airline’s Keegan Lehr intercepted a pass that was tipped twice and returned it to the Bucs 19.

Tre Jackson eventually scored on a 3-yard run. Johnson scored the Vikings’ final TD on a short run. The combination of Johnson and Jackson was effective and Epps, a sophomore, ran the offense well.

Airline’s Justin Washington had an interception late in the game to stop another potential Haughton touchdown drive.

Meeks is thrilled with the turf field.

“It’s awesome,” he said “We’re blessed. So grateful to have it and I know it was awesome for the Lions Club for this event. So grateful for the fans and everybody that came out and I’m really proud of our kids.”

Airline will get a chance to play a full game on the turf in the season opener against Ouachita Parish on Friday night.

Haughton racked up a lot of yardage but the turnovers proved costly. Rains was sharp and Smith ran hard. Coleman Stafford and Joshua Sewell made some nice catches.

The Bucs open the season Friday at home against Red River. In other openers Friday, Parkway visits Minden, Bossier hosts Arcadia and Plain Dealing is at Booker T. Washington.

Benton opens its season at Northwood on Thursday.