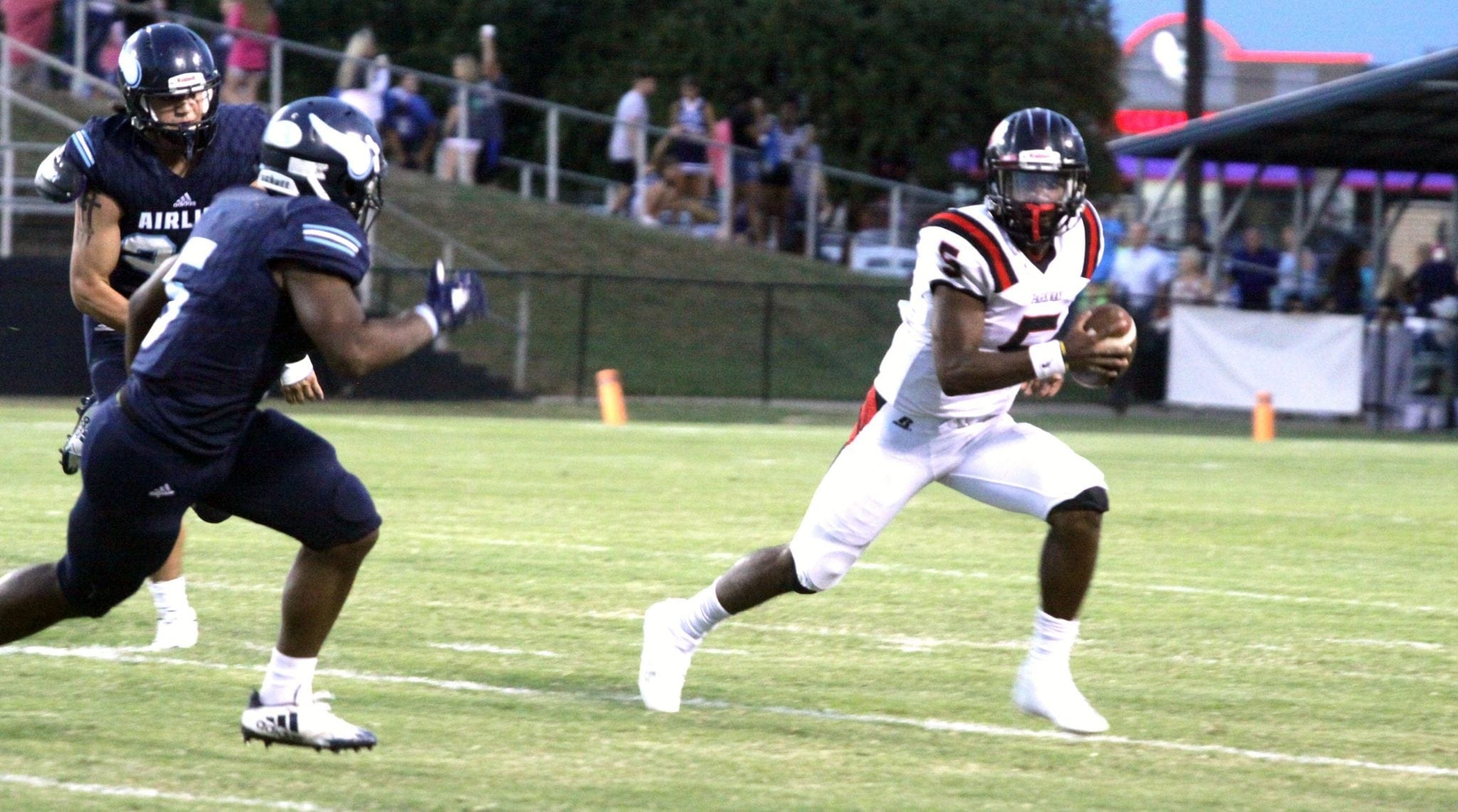 The Parkway Panthers edged the Airline Vikings 42-35 in a District 1-5A thriller Friday night at M.D. Ray Field at Airline Stadium.

It was a heartbreaker for the Vikings, who rallied from a 21-0 first-half deficit to take a 35-34 lead in the fourth quarter.

For the Panthers, there was joy after losing two out of the top players in the country to injuries in the first two games and surviving a three-game stretch against some of the region’s top teams.

Eric “EJ” Williams, who scored four touchdowns in the game, punched in the go-ahead touchdown on fourth-and-goal from the 1 with 2:15 left in the game. Junior quarter Amani Larry then passed to Jalen Brown for the two-point conversion.

The Panthers then survived an Airline drive put together by junior quarterback Brad Fream. Starting from the Airline 20, Fream completed seven passes as the Vikings drove to a first down at the Parkway 28, converting a fourth-and-4 in the process, with 25 seconds left.

A 13-yard completion moved the ball to the 15 with 15 seconds left. After Fream spiked the ball, Parkway’s Codie Bickel sacked Fream and time ran out before Airline could get another play off.

Bickel also had a big play in the first half, blocking a punt which was returned 49 yards by Jacoby Taylor for Parkway’s second TD. Bickel and Taylor were both in on 12 tackles, leading the team.

Fream completed 27 of 35 passes for 205 yards and three touchdowns with no interceptions.

Larry, Williams and Gill had big games for Parkway. Larry rushed 112 yards on 25 carries and scored a touchdown. He also passed for 78 yards.

Williams carried 24 times for 110 yards. Gill caught three passes for 66 yards, including the two big ones on the final drive. Freshman kicker Louis Espino made four of five extra-point attempts. The final one was blocked.

Freshman Jackson Tinkis made all five of his extra-point attempts, including the final one which gave the Vikings the 35-34 lead with 7:08 left in the game.

Penalties were a big factor in the game. According to Parkway stats, Airline was penalized 13 times for 108 yards. A defensive holding penalty on a fourth-down kept one Panthers TD drive alive. Parkway was penalized nine times for 88 yards. An unsportsmanlike penalty helped Airline move into scoring position on its final drive.

Parkway took the 21-0 lead on two Williams’ TD runs and the blocked punt. Airline took some momentum into the half on Fream’s 8-yard touchdown pass to George with 1:37 left. Fream hooked up with Jamal Johnson for 18 yards on third-and-13 from the Vikings 35.

After a poor Parkway punt, the Vikings went 20 yards to tie it. Davis had a 3-yard run on fourth-and-1, and Fream passed 10 yards to Fullilove for the score.

Larry had an answer for Parkway. He raced 35 yards on the first play after the kickoff and a personal foul on Airline moved the ball to the 13. Larry scored on the next play.

The Vikings tied it at 28 late in the third quarter, driving 65 yards. Davis carried for four yards on fourth-and-2 from the 7 and then took the ball into the end zone.

Parkway regained the lead with a 58-yard drive. Williams sprinted 30 yards to the 1 on fourth-and-1 and then scored on the next play.