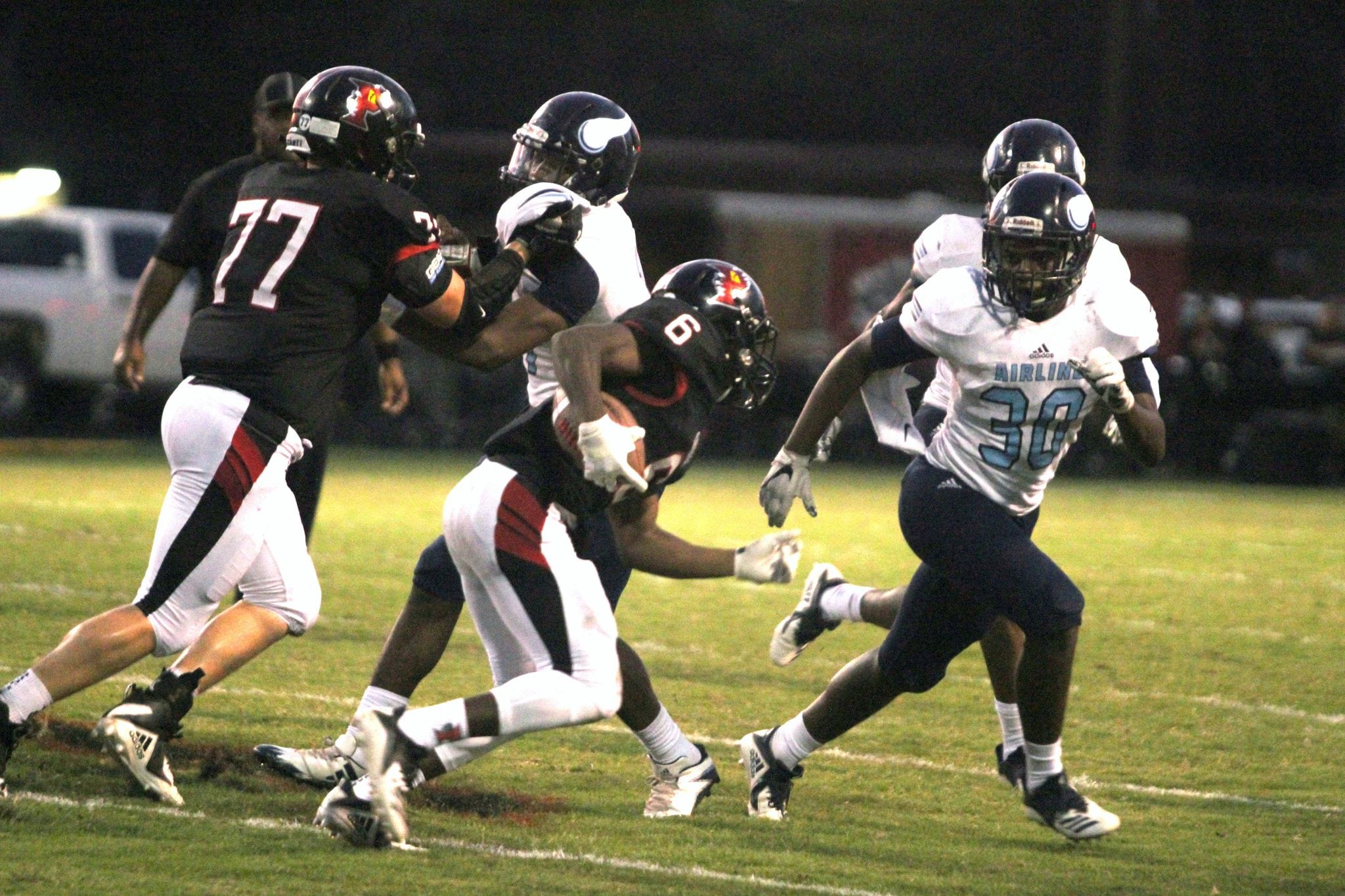 The Parkway Panthers rallied from an early deficit and then held off the Airline Vikings late in a 23-21 District 1-5A victory Friday night at Bobby Marlow Field at Preston Crownover Stadium.

The game wasn’t the prettiest with both teams racking up multiple penalties, including 17 alone in the first half.

“It was ugly,” Parkway coach Neil May said. “But I tell our kids all the time that adversity is coming whether we cause it or it just happens. And tonight we did not play well in the first half. Coach (Kevin) Black, our offensive line coach, said we don’t have any more toes left from shooting ourselves in the foot (in the first half).

“But here’s the thing. Our kids responded after halftime and kept us in the game. Our defense did. We were able to run the football on them and we came out on top. So proud of our defense tonight. They played great.”

The Vikings especially hurt themselves with several major violations that negated positive plays. A penalty on third down likely kept the Panthers’ final touchdown drive alive in the fourth quarter.

“It’s just embarrassing,” Airline coach Bo Meeks said. “I mean we’ve got to do a better job as a coaching staff. We’ve got to do a better job of taking care of small things and details. Unfortunately tonight against a good football team to give them that many breaks off our mistakes, we can’t do it. And hats off to them. They played a great game and they capitalized.”

Parkway’s Isaiah Robinson had an interception return for a touchdown in the third quarter erased by a block in the back. But the Panthers capitalized with a 32-yard touchdown pass from sophomore quarterback Gabriel Larry to Chase Turner.

The TD gave Parkway its first lead at 16-14. The PAT failed after a low snap.

Parkway drove 60 yards for its final touchdown after stopping Airline on fourth-and-10 in the fourth quarter. On third-and-4 at the Parkway 46, the Vikings stopped Alijah Barnett for a 1-yard loss. But an unsportsmanlike conduct penalty gave the Panthers a first down.

Jamall Asberry had runs of 9 and 10 yards. Barnett ripped off a 22-yard gain to the 1. One play later Larry got into the end zone. This time, Parkway perfectly executed the PAT and Luis Espino’s kick was true, giving the Panthers a 23-14 lead with 7:16 left in the game.

The Vikings weren’t done, though. Meeks replaced starting quarterback Brad Fream with fellow senior Jordan Gladney, who led the Vikings on an 80-yard TD drive. Gladney, who had several nice runs and completions on the drive, hit Antavious Freeman for a 7-yard TD.

Like Parkway, Airline also had issues with PATs, failing to convert two in the first half. But Jackson Tinkis’ kick was good and the Vikings trailed by just two. There was still 3:49 left on the clock, but the Vikings were down to their final timeout.

After the Panthers jumped on a short kickoff, three runs netted seven yards. On fourth-and-3, Airline committed its final penalty, jumping offsides and giving Parkway a first down. The Panthers then ran out the clock.

Both teams struggled offensively in the penalty-filled first half.

Airline put together one touchdown drive in the first quarter. Fream capped the drive with a 6-yard TD pass to Freeman.

The Panthers answered with a 28-yard Luis Espino field goal set up by a punt blocked by Ted Nelams deep in Airline territory.

The Vikings sacked Larry in the end zone for a safety to go up 8-3 early in the second quarter. Brandon Marshall then returned the kickoff 72 yards for a touchdown.

The Panthers got a huge touchdown with 6:41 left in the half. On fourth-and-6 from the Airline 41, Larry scrambled to his left. He got rid of the ball to running back Jamall Asberry under pressure. It looked like the Airline defender had a bead on Asberry and the ball, but Asberry hauled it in and raced to the end zone.

Airline put a lot of pressure on Larry, making his second start for his injured brother, Amani. That pressure resultedin multiple sacks for 90 yards in losses. But Larry kept his poise and made some plays. He completed six of 14 passes for 126 yards and two TDs.

“We’re proud of Gabe,” May said. “Hey, he’s a sophomore. How many sophomores are going to go out in this district and just be lights out. We know he has a ways to go. We can’t wait to watch him mature and grow and become the quarterback that he can be.”

Asberry led the Panthers on the ground with 62 yards on 15 carries. Most of that came in the second half.

According to Parkway stats, Nelams, Kendtravious Morris and Damarkus Hinson were all in on nine tackles to lead the defense. Adam Johnson was in on eight, Kyle Scott seven and Trenton Defatta five. Kaybien Smallwood was in on six tackles and had an interception.

While Parkway started having some success running in the second half, Airline continued to struggle.

“We couldn’t sustain drives on offense,” Meeks said. “We left the defense on the field too long, had a couple of breakdowns on third and fourth down in the secondary. We can’t allow those plays.”

Meeks was understandably frustrated after the game. Three of the Vikings’ four losses have been by a combined 10 points. In a 36-19 loss to Ruston, Airline led going into the fourth quarter.

Needless to say, Airline’s record could look a lot different right now. But Meeks isn’t interested in “what ifs” or “could’ve done this or that.”

“It is what it is,” he said. “We’ve got to do a better job of focusing on the little things, staying focused for 48 minutes. Again, we’re at Week 6 now, can’t continue to make the mistakes we were making at one, two and three. We’ve got to get better, all of us.”

Parkway also faces a tough test Friday. The Panthers take on Captain Shreve (4-1, 0-1), which suffered its first loss of the season, 27-25, Thursday night against rival Byrd.