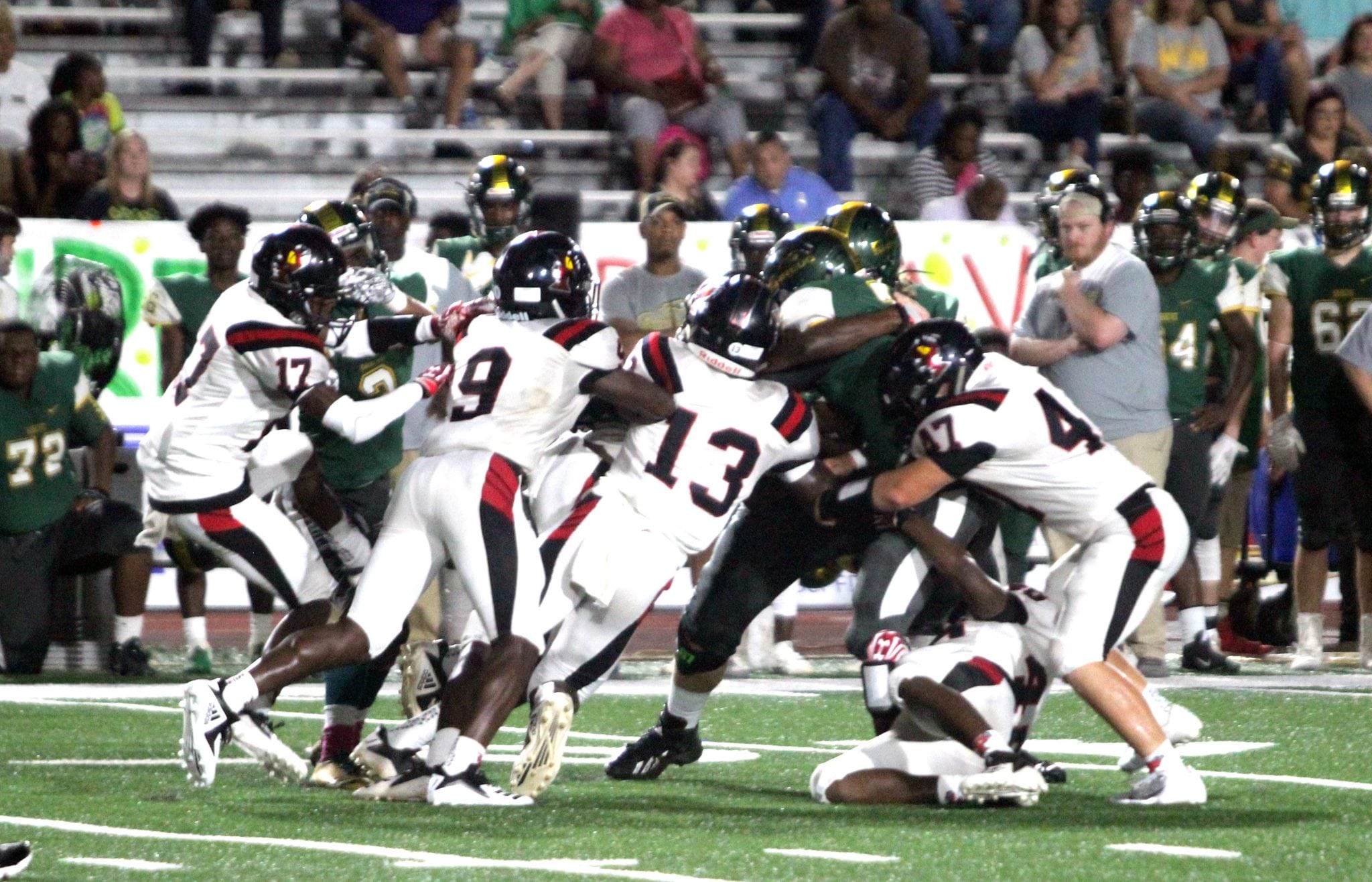 About all Parkway coach Neil May could do after his Panthers lost to Captain Shreve 23-2 Thursday night at Lee Hedges Stadium was tip his cap to the Gators.

Shreve ended an 11-game losing streak to Parkway, including two losses in the first round of the playoffs. It was the Gators’ first victory over the Panthers since 2006, when both teams were in Class 4A.

Late in the game, Parkway senior receiver Kobe Gill took a hard hit to the back going after a deflected pass. He went to the ground and lay flat on his back but did bend his knees while being attended to by medical personnel.

After approximately 20 minutes, an ambulance arrived to take him to a hospital. May said it was a precautionary measure.

“He got hit in the back pretty hard,” May said. “The doc saw him. Everything was moving good.”

Things started badly for Parkway. The Panthers lost a fumble at their 27 on the first play and the Gators took advantage, scoring on a 2-yard run by quarterback Darius Grant.

With less than three minutes gone in the game, Shreve led 7-0.

Parkway got on the board later in the first when Kentravious Morris sacked Grant in the end zone for a safety.

Shreve answered with 16 points in the second quarter. DJ Fleming, who rushed for 180 yards on 22 carries, scored on runs of 3 and 15 yards. Most of Fleming’s yards came in the first half.

The Gators used a 53-yard wide receiver pass play to get into position for a field goal late in the second quarter. Gage Simpson booted it through the uprights from 37 yards out with 15 seconds left.

Parkway had a couple of scoring opportunities in the first half but failed to convert fourth downs on both. The Panthers’ best chance came after they recovered a muffed punt deep in Shreve territory in the second quarter down 20-2.

A TD there could’ve been a momentum shifter.

“There were certainly opportunities and we just didn’t take advantage of them,” May said. “Just goes back to us not executing.”

After forcing a punt on Shreve’s first possession of the second half, Parkway put together its best drive of the game. Staying mostly on the ground, the Panthers drove from inside their 20 to near the Shreve 30. But the Gators came up with the stop on fourth-and-two.

May didn’t use it as an excuse, but the Panthers were short-handed on offense. Leading rusher Jamall Asberry didn’t play for an undisclosed reason.

Alijah Barnett led the Panthers with 101 tough yards on 20 carries.

Sophomore Gabriel Larry, making his third start in place of his injured brother, Amani, struggled passing, completing just two of 10 for 47 yards. But he did contribute 39 yards rushing in eight carries.

While Fleming did a lot of damage in the first two quarters, the Panthers limited Grant to 53 yards passing on six completions in 14 attempts.

“I sure am proud of our defense,” May said. “They kept us in the game all night, played well. We left them on the field and just didn’t execute offensively.

Captain Shreve, which is 5-1 for the first time since 2005, visits Haughton next Thursday. The Bucs (4-1, 1-1) are at Franklin Parish in a non-district game Friday night.