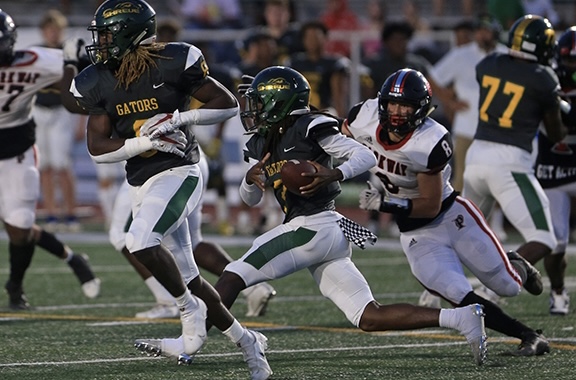 The Parkway Panthers couldn’t have played a much better first half than they did in a District 1-5A matchup against Captain Shreve Thursday night at Lee Hedges Stadium.

Parkway had success throwing and running against the Gators en route to a 21-14 lead.

Then came the second half, which the Panthers would certainly like to forget. Pretty much everything that could go wrong went wrong. And even when it appeared something went right, it turned into a negative through no fault of the Panthers.

Parkway got off to a good start in the second half with an 11-yard run. Then things quickly went downhill.

The Gators recovered a snap that sailed over quarterback Cannon Link’s head. The Parkway defense, which played well throughout the game, limited the damage to a field goal.

“The defense really on the first turnover stepped up and forced them to a field goal which was huge,” Parkway Head Coach Coy Brotherton said. “That was a huge win.”

But on the Panthers’ first play following the kickoff, Shreve returned a fumble for a touchdown, taking a 24-21 lead.

On Parkway’s next possession, the Gators forced a punt deep in Panthers territory. It hit a blocking back and was knocked out of the end zone for a safety.

All of a sudden it was 26-21 Shreve not even four minutes into third quarter.

“You look up and three minutes is off the clock and they’ve already scored 12 points in the quarter,” Brotherton said. “It kind of took a lot of momentum away from us. We kind of had the  wind taken out of our sails a little bit. We tried to rebound and recover … We still had a chance to cut it to a one-score game in the fourth quarter.”

Parkway elected to punt on the free kick and the Panthers got a break, recovering the ball near midfield. But they couldn’t capitalize and punted.

Shreve was backed up to its 10, but the Gators came up with some big plays and scored to go ahead 33-21.

That was the score entering the fourth quarter. Then came a bizarre set of events that resulted in the game being delayed by what seemed like an eternity.

Parkway faced a fourth-and-11 at its 45. The Panthers lined up in punt formation then suddenly shifted to a different set.

Before the ball was even snapped, the chains crew began moving the chains downfield with the downs marker staying in place.

The Panthers needed to reach the Gators 44 to keep the drive alive. They executed the play perfectly. Cade Josting completed a pass to Ray Mayweather and it appeared he was pushed out of bounds at the Shreve 41.

First down, right? Not so fast. With the chains having been moved and no clip to reset, the officials apparently didn’t know what yard line Parkway needed to reach.

After at least 20 minutes of discussion, Shreve was awarded the ball. Instead of needing to go 41 yards to score and possibly cut the lead to five, the Panthers were back on defense.

After a couple of unsportsmanlike conduct penalties against Parkway, the game finally resumed. The Gators immediately scored a touchdown on a pass and went up 40-21.

Brotherton said the explanation he got from the officials was “really just human error.”

“Obviously we were behind. They had the momentum. (But) ten minutes left and you’re down 12 and you get a first down across midfield. You’ve got to be thinking you can hopefully score and make it a one-score game with eight minutes left.”

Brotherton knew Shreve would make some big plays, but overall he was pleased with how the defense stepped up. Parkway turned back a threat after a short punt late in the first half with an interception in the end zone.

“I thought they played well,” he said. “We kind of went into it knowing that Shreve has a couple of receivers that are good — Kendrick (Law) and Braylin Finney and those guys. They hit three big plays on us for touchdowns, but I thought as far as the defense trying to make them earn it I thought for the most part all night they did a good job. The big plays hurt us. We knew they were going to get a couple of them. We were just going to try to minimize them the best we could.”

Parkway took an early lead on a beautiful 28-yard pass from Link to Ron Richmond. Richmond was well-covered in the end zone but Link put the ball only where he could catch it.

After Shreve went up 14-7, the Panthers ran the ball right at the Gators with Richmond scoring on a short run.

Parkway was quickly in business again after recovering a line-drive kickoff. On the first play, Link found a wide-open Ed Moses running down the sideline for the touchdown. Aeron Burrell’s third PAT made it 21-14.

Richmond and Derek Brown turned short passes into long gains in the first half. Brown also ran the ball well.

While it may be difficult, the Panthers will have to put the Shreve game behind them quickly.