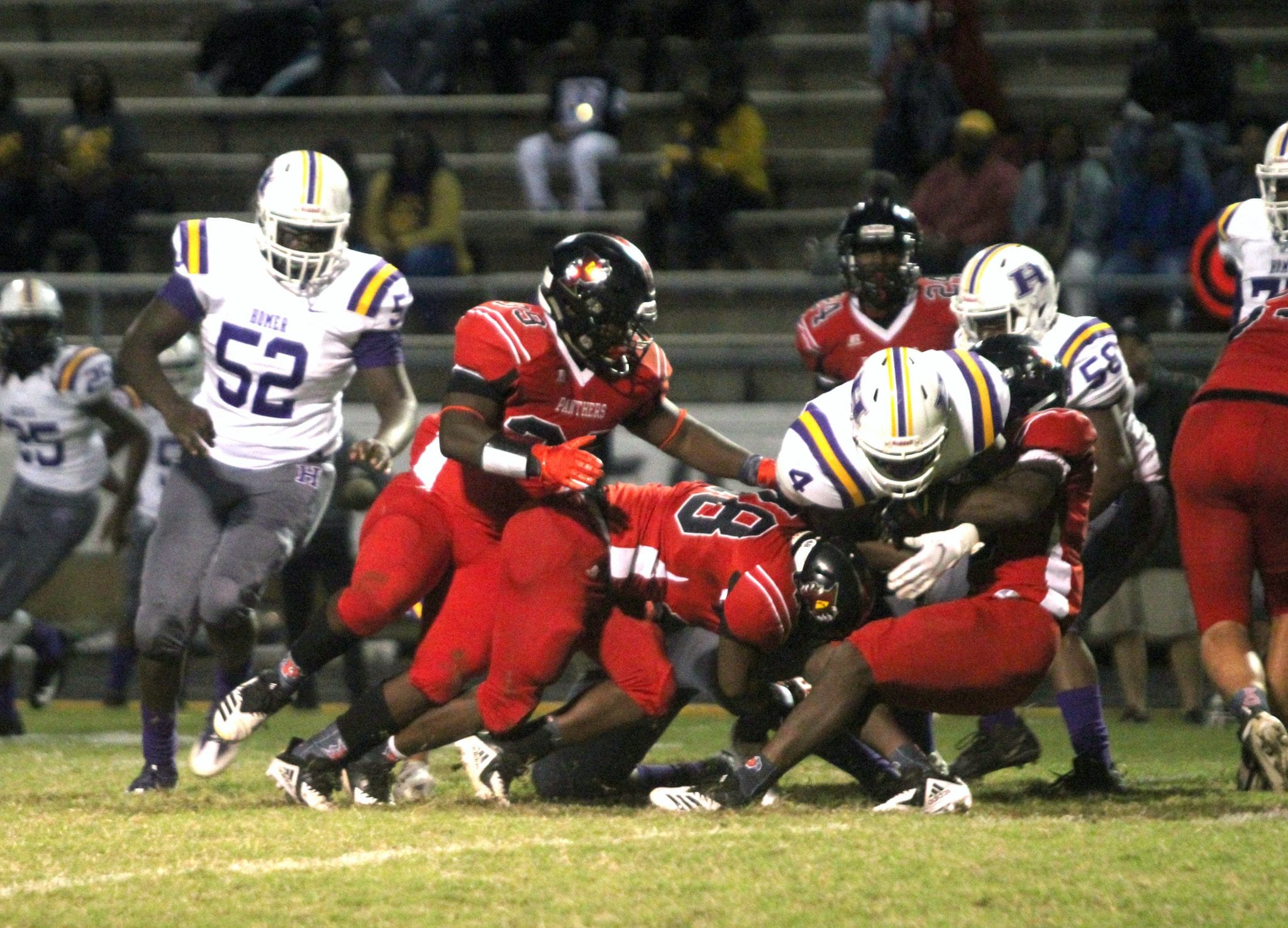 With two weeks left in the regular season, four Bossier Parish teams have locked up playoff berths — Haughton, Parkway, Benton and Plain Dealing.
Despite losing to Captain Shreve 20-10 last week and falling to 2-6, Airline is also still in the picture. The Vikings must defeat Byrd (6-2) Friday night at home to remain there, though. Then they’ll have to defeat Haughton (7-1) at home in the regular-season finale.
Week 8 was another one with mixed results for parish teams.
Haughton continued to roll, knocking off Southwood 47-22 at home. The Bucs, who are in second place behind Evangel Christian in 1-5A, may be the only parish team hosting a first-round playoff game.
Benton (5-3) won its third straight, a closer-than-expected 14-12 victory over Huntington. The Tigers are in second place in District 1-4A, one game behind undefeated Northwood.
At No. 18 in the Class 4A power rankings, according to louisianasportsline.com, Benton still has a shot at being at home in the first round.
Parkway (4-3) defeated Class 1A Homer 34-14 at home. At No. 19 in Class 5A, the Panthers can get a boost by beating Haughton at home Friday. But even combined with a victory in the season-finale against Southwood, it may not be enough to move them up the three or more spots necessary to get a home playoff game.
Bossier (1-7) and Plain Dealing (2-6) both lost home games. The Bearkats fell to Woodlawn 56-24 in a District 1-4A matchup. The Lions put up a good fight against undefeated Haynesville in a 35-8 District 1-1A loss.
The Parkway-Haughton game is definitely the marquee matchup this week. The Byrd-Airline game is also intriguing.
In District 1-4A, Benton (4-1 district) hosts Woodlawn (4-4, 3-2) and Bossier (0-5 district) hosts Minden (2-6, 2-3). In District 1-1A, Plain Dealing (1-3 district) is at Lincoln Prep (1-7, 1-3) in the only Thursday night game.
Last year, Haughton broke a long victory drought against Parkway, winning 45-17. The Bucs have to be considered the favorite Friday, but the Panthers have the revenge factor going for them.
Last week against Southwood, Haughton starting quarterback Peyton Stovall watched the game from the sideline in street clothes after suffering an AC joint sprain in his right (throwing) shoulder against Captain Shreve in Week 7.
Junior CJ McWilliams, one of the area’s most productive receivers, gave the Bucs a spark when he came in at quarterback after Haughton got off to a somewhat shaky start.
Haughton will miss Stovall if he is unable to play this week. They’ll also miss McWilliams’ contributions at receiver if he has to play quarterback, although he can make plays at that position, too.
But Haughton also has the parish’s top rusher in Keyshawn Davis and a defense that’s been solid.
Parkway got off to a slow start against Homer. The Panthers eventually put away the outmanned Pelicans thanks to a strong running game and stifling defense.
Parkway may have to get a little more out of its passing game to beat the Bucs. However, the game could come down to whose defense is better able to stop the run.
Speaking of the run, Airline will have to slow down Byrd’s option offense and running back Charlie Barham to have a chance.
Last week’s game against Shreve was like a microcosm of what has been a frustrating season. Some untimely mistakes and missed opportunities cost the Vikings.
Four of Airline’s six losses have been by 10 points or less.
While the team’s record doesn’t reflect it, the defense has played well all season. One of Shreve’s three TDs was a fumble recovery in the end zone.
Despite losing to Evangel 42-7 last week, Byrd has had a very good season and will provide a big challenge. But if the Vikings can finally put it together on both sides of the ball against a good team Friday, they will be in it until the end.
Benton struggled on offense against Huntington, but the defense turned in a dominating performance. The Raiders started five drives inside the Tigers 40 in the first half and the result was just one touchdown.
Benton will need another good defensive effort against Woodlawn. The Knights offense has looked good the last three weeks.
The Tigers offense will have a chance to get back on track against a defense that has given up a lot of points.
Benton’s last four games have been decided by four points or less. To the Tigers’ credit, they found a way to win three of them.
Benton is the favorite Friday, and I don’t think the game will be as close as the previous four. But I didn’t think the Huntington game would be as close as it was, so we’ll see.
Bossier got off to a good start against Woodlawn, taking a 14-0 lead. The Knights rallied, but the Bearkats trailed just 22-17 at the half. Woodlawn, which dressed out about twice as many players as Bossier, dominated the second half.
Minden has lost three straight close games. The Crimson Tide played third-ranked Northwood to the wire in a 20-14 loss last week. The Falcons defense scored all three touchdowns.
Plain Dealing coach James Thurman was pleased with the way his team battled against Haynesville. The undermanned Lions held the Golden Tornado offense in check most of the first half. They had a chance to get within 12 or 14 in the third quarter but a drive stalled at the 10.
Plain Dealing started a seventh-grader at linebacker and an eighth-grader on the defensive line last week. But the Lions are in a little better shape numbers-wise than they were a few weeks ago with about 21 healthy players.
Plain Dealing has a very good chance to win another game Thursday. Lincoln Prep is coming off a 52-20 win over Ringgold, its first of the season. The Panthers are allowing an average of 44 points per game.