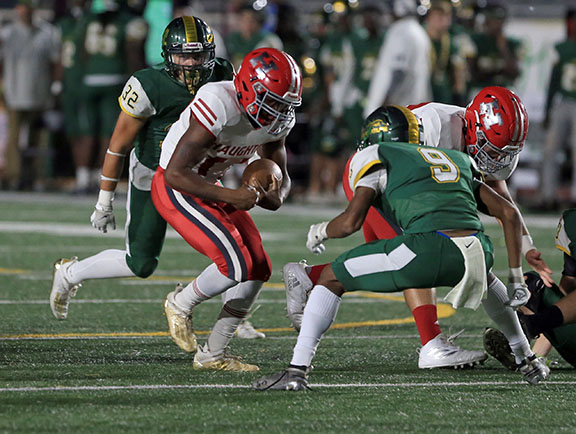 Don’t be deceived by the 38-21 final score. The Parkway Panthers’ loss to the Natchitoches Central Chiefs Thursday night at Turpin Stadium was much closer than that.

An 11-yard pass touchdown from Cade Josting to Ron Richmond followed by a Richmond two-point conversion run got the Panthers within 25-21 with 9:20 left in the game.

The Panthers forced a third-and-12 on Natchitoches Central’s ensuing possession, but the Chiefs converted with a pass completion. Jeremiah Miles capped the 80-yard drive with a 51-yard burst up the middle.

But still it wasn’t over. Parkway took over inside the Chiefs 25 after a good kickoff return from Ed Moses with a 15-yard penalty added at the end. But Justin Aaron ended the threat with an interception.

The defense made two more stops, but Aaron picked off passes after both. He returned the final one 91 yards for a touchdown.

The Panthers rallied from a 19-6 halftime deficit. Josting’s 42-yard pass to Ed Moses was Parkway’s lone score on the half.

Natchitoches Central scored on a 52-yard run by B.J. Young and a 20-yard interception return by Gabe Vaughn.

According to a report in the Natchitoches Parish Journal, the Chiefs got a big break late in the first half. After a snap from the Chiefs 25 went over Young’s head and rolled near the end zone, running back Caylin Demars picked it up and passed to Colby Raupp near midfield. Raupp took the ball to the end zone, completing the 75-yard play.

Parkway scored on its first possession of the second half on an 8-yard pass from Josting to Richmond. Aeron Burrell’s PAT made it 19-13.

According to the NPJ via Natchitoches Central statistician Warren Massia, Demars finished with 125 yards on 25 carries.

Also according to the NPJ, the teams were penalized a combined 35 times for 295 yards.

Captain Shreve 52, Haughton 14: Captain Shreve’s big-play offense proved too much for the Bucs to handle in a District 1-5A game at Lee Hedges Stadium.

With Colin Rains doing a masterful job of running the offense, the Bucs kept pace with the Gators for most of the first half.

Haughton had two 80-yard touchdown drives in the first quarter.

Tyler Rhodes scored the Bucs’ first touchdown on a 15-yard pass from Rains. Rains, who had some nice runs on both drives, scored the second on a 3-yard run. A 47-yard pass to Jalen Lewis keyed the drive.

After Shreve took a 21-14 lead on Kenyon Terrell’s 54-yard pass to Kendrick Law on fourth-and-4, Haughton took over on its 7 after a penalty on the kickoff return.

The Bucs proceeded to drive 88 yards to the Gators 6. On third-and-3, Haughton was flagged for offensive pass interference. A delay of game penalty followed. Two incomplete passes from the 26 resulted in a turnover on downs.

Terrell then connected on a 74-yard touchdown pass to Marquez Stephenson and it was pretty much all Shreve from that point.