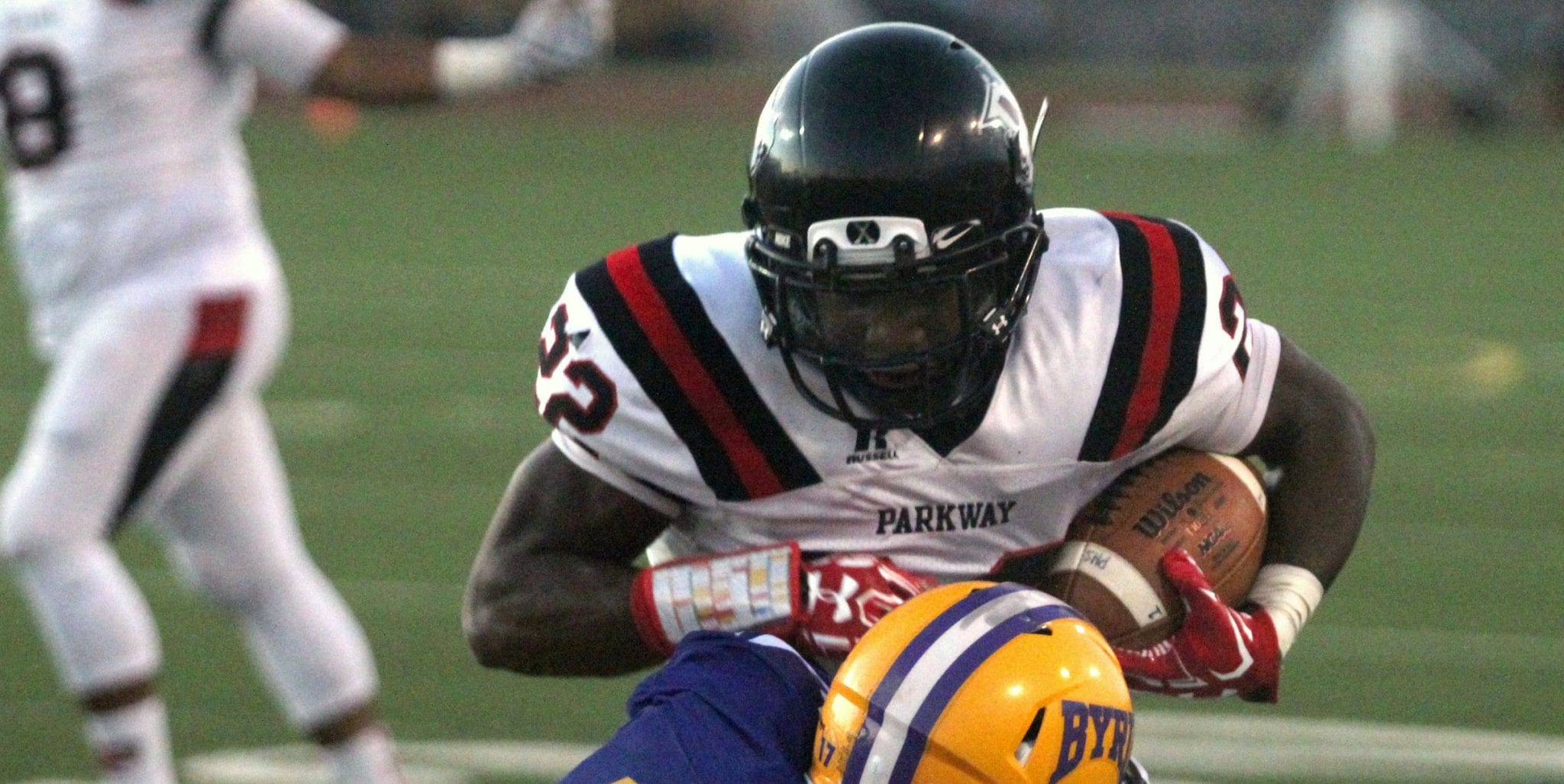 The Parkway Panthers bounced back from last week’s big loss to Evangel with a 40-16 victory over the Byrd Yellow Jackets on Thursday night at Lee Hedges Stadium.

The Panthers improved to 4-1 overall and 1-1 in district play. They return to Lee Hedges Stadium this Thursday to face Captain Shreve. Byrd dropped to 0-5 and 0-2.

Parkway junior quarterback Justin Rogers had big nights passing and running. He completed 18 of 28 for 302 yards and two touchdowns. Rogers rushed for 52 yards, including 37 in losses, and a touchdown.

Junior receiver Terrace Marshall Jr. also returned to form after not catching a pass in the 45-8 loss to Evangel. He caught seven passes for 158 yards and the two touchdowns.

Marshall’s TD catches covered 25 and 60 yards. The latter was a screen pass. He caught the ball around the line of scrimmage, angled toward the Parkway sideline and outran Byrd defenders to the end zone.

Senior running back Robert McKnight scored touchdowns on runs of 7 and 34 yards. He finished with 74 yards rushing and 50 receiving.

Chase Hill scored on a 10-yard run in the final minute of the first half that put Parkway on top 33-6.

All told, the Panthers piled up 516 yards, including 214 on the ground.

“We made some plays at times,” Parkway coach David Feaster said. “At times we blocked them pretty well and those guys were able to make some plays. It was enough to beat a good team.

“Obviously, Byrd is not what they used to be, but I thought they were better this week than they were last week. It’s a sign of a young ballclub. They get better week by week. I think before the season is over with they’re going to be pretty respectable.”

The Yellow Jackets put some pressure on Rogers, forcing him to scramble on several occasions.

“The thing we talked about at halftime particularly was offensive line pass protection. We want more time to throw the football,” Feaster said.

The Parkway defense didn’t allow a touchdown. Byrd returned the opening kickoff of the second half for a touchdown.

The Jackets were able to move the ball some. Byrd finished with 159 yards rushing, according to Parkway stats. But they couldn’t get the ball into the end zone. Placekicker Ben Smith kicked three field goals.

Penalties hurt the Jackets offense when they got inside Parkway territory, but the Panthers also stepped up and made stops behind the line of scrimmage.

Smith’s third field goal made it 33-16 in the third quarter and gave Byrd a flicker of hope. But McKnight ended it with his 34-yard dash to the end zone.

The Jackets, who have been hit hard by injuries, were sharper than they were in Week 4’s 34-7 loss to Captain Shreve. In that game, they fumbled 11 times and had six turnovers. Byrd did fumble five times Thursday night but lost only one. The Jackets actually won the turnover battle 3-1.

“If they fumble the ball 11 times we will beat them by 50,” Feaster aid. “That was unlikely. Their defense was good enough to put up a good fight and they certainly did at times. They chased us around. It was a good workout for us. We’re glad to have the win against Byrd but at the same time we’re glad to have the practice because we’re going to play against people like this down the road.”

David Morales led the Panthers defense with 11 tackles. Tony Beckwith was right behind him with 10. Malcolm Banks had seven. Cordarious Moore and Caleb Reese had six each. Joey Cook had five.

Reese recovered a fumble in the first quarter right after Parkway lost a fumble at its 29-yard line. The Panthers led 6-3 at the time.